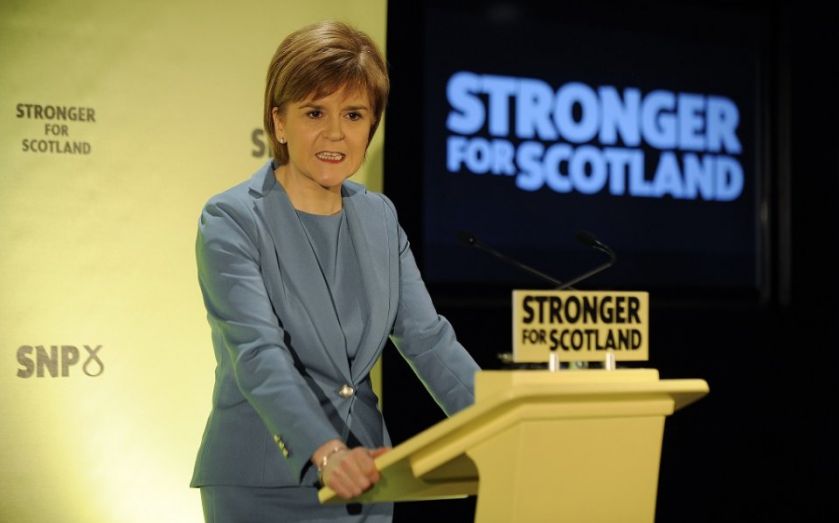 The SNP could win every single constituency in Scotland in what would be one of the most dramatic swings in British political history.

A new STV News poll conducted by Ipsos Mori puts the SNP on 54 per cent – a massive 34 points ahead of Labour.

The Electoral Calculus website forecasts that if this poll was reflected on polling day, Nicola Sturgeon's party would capture all 59 Scottish seats. The Tories have increased their support in Scotland by five points to 17 per cent, the poll suggests.

The sweeping win across Scotland would make the SNP the third largest party at Westminster bringing the party considerable influence over the next government in the event of a hung parliament.

But Nicola Sturgeon is not resting on her laurels, today urging Scots to keep up the pressure and vote SNP.

An SNP victory of this magnitude would be devastating news for Labour and its leader in Scotland, Jim Murphy, in particular. Murphy won widespread praise for his efforts to keep Scotland in the Union and it was hoped he could turn around Labour's faltering fortunes north of the border.

But despite promises of new nurses for Scotland funded by a mansion tax largely levied in London, nothing Murphy has done appears to be cutting through with Scottish voters.

If the SNP continue to gather strength, Labour could face a situation in Scotland to that of the Tories who have been virtually wiped out in large parts of the country and are currently holding onto just one seat.

Some 80 per cent of those surveyed said they were certain to vote on 7 May.

This record poll shows that our positive campaign to make Scotland stronger at Westminster by electing a team of SNP MPs is gaining momentum, but we are working hard for every vote because we take absolutely nothing for granted.