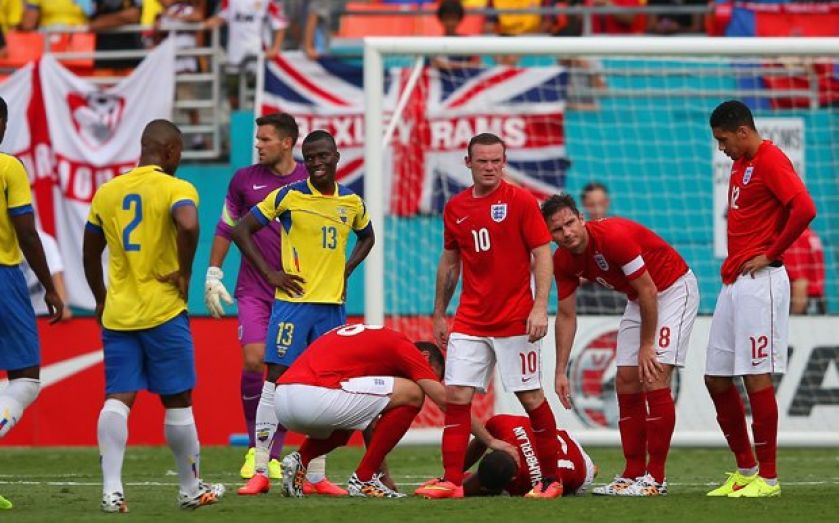 Goals from Wayne Rooney and Rickie Lambert cancelled out Enner Valencia’s early opener for Ecuador, but Michael Arroyo arrowed in a second-half equaliser.

Both teams ended the game with 10 men following a clash between wingers Antonio Valencia and Raheem Sterling, but Hodgson’s biggest concern was on the condition of Oxlade-Chamberlain, who suffered the injury when Carlos Gruezo kicked the back of the Arsenal man’s heel and then rolled over his foot.

“We have our fears there might be some ligament damage,” said Hodgson, who also confirmed Jack Wilshere and Luke Shaw were substituted having suffered cramp.

“Oxlade-Chamberlain is the one that bothers. His knee buckled under the challenge as the player turned into him.

“When we’ve had the scan, we’ll know more. My hope is that Oxlade-Chamberlain will not be seriously injured. He did ever so well and looked really, really sharp.

“It would be an enormous blow if we were to lose him, so I’d prefer to concentrate on the satisfaction and positivity I can take from the game.”

With Rooney the only survivor from the team that beat Peru on Friday, England’s youthful line-up, desperate to impress, made a promising start with captain Frank Lampard firing wide Lambert’s low cross.

But, against the run of play, Ecuador took the lead on eight minutes when Enner Valencia evaded defenders Chris Smalling and Luke Shaw to head in Walter Ayovi’s cross from six yards.

The equaliser came on 29 minutes when Oxlade-Chamberlain’s floated cross was bundled against the post by Lambert and Rooney tapped in his 39th England goal from a yard out to his relief following a poor run of form.

Hodgson’s men took the lead with a stunning second goal six minutes into the second half when Everton’s Ross Barkley, earning his fourth cap, burst through the Ecuador midfielder and laid a pass on for Lambert to lash in with the outside of his right foot.

Three minutes after Ecuador hit the post, Arroyo fired in from 25 yards with 20 minutes remaining. But the game ended on a sour note; Sterling shown a straight red card for a strong challenge on Antonio Valencia, who followed him down the tunnel after raising his hands in retaliation.

ENGLAND’S World Cup group rivals Italy were held to a 1-1 draw by minnows Luxembourg. Arjen Robben was on target as Holland beat Wales 2-0. World Cup debutants Bosnia-Herzegovina won 1-0 against Mexico, while Gibraltar won their first ever match with a 1-0 triumph against Malta. Kyle Casciaro scoring their historic goal.