Bitcoin had a sudden surge yesterday breaching $23,000 for the first time and even (briefly) spiking to beyond $24,000 at one point early this morning. So what’s going on and is it likely to stay there?

Well, I hope you’re not looking to me for answers. It’s true this seemed to happen very quickly after the Federal Reserve raised interest rates by a pretty chunky 0.75% but this just raises a new set of questions and observations.

Can one geographical market really have enough power to move price that much? Wouldn’t that price change be downwards anyway given that this is another indicator of tightening of monetary policy? Wouldn’t moves of this nature seem to indicate that Bitcoin is still being primarily traded as a risk on asset?

We can debate this all day, but, for now at least, there is probably truth in the latter point. Adoption may be steaming along (and it really is) but we’re still some way off Bitcoin payments being routine.

Back in the US, we witnessed the bizarre spectacle of the White House redefining the oft-referred to definition of “economic recession” and denying it had done so in a move that even George Orwell’s Ministry Of Truth would have been wary about doing so publicly.

Arguably there are some mitigating data sets, but the US has just recorded two consecutive periods of negative GDP growth. That’s a recession, even if you have midterm elections coming up and you don’t like it.

The sheer audacity of this change of definition is terrifying. Either the administration is assuming that everyone is stupid or doesn’t care or has the approach that they can just do what they like. We’ve been on this slippery slope for a while, but it does feel we’ve been gathering momentum recently.

But it’s not just the Americans. The Russians have also been trying to present a rosy picture of their economy as sanctions take hold. Yale’s latest detailed report, however, completely decimates that claim and shows just how seriously crippled the underlying machinery is. At 118 pages it’s a chunky read, but this summary by the same author tells you all you need to know.

Meanwhile, the donation of HIMARS and other similar systems from the allies has all but brought Russia’s invasion to a standstill. Russian losses are substantial, morale is low and with the clear effects of economic implosion happening within the country it’s clear that Russia is about to, or already has, lost its “superpower” mantle.

Putin would clearly like to do as much damage as he can as he falls, however.

He’s been doing this through restricting global food supplies via grain and economically via gas and oil. The effects of this are being felt by every nation on earth, but no more so in Europe where this article by Bloomberg yesterday identified France as currently the most vulnerable to price. There, the 1 year forward baseload power contract is currently peaking at 550Euro (£420) per MWh.

To put it into context, in the UK, where we expect to see £500 a month bills by early next year, the current price is around £150 per MWh.

Yes, tough times are ahead, but forewarned is forearmed and, as Bitcoin becomes an ever more obvious choice for an ever growing number of people, I have no doubt that eventually we’ll collectively come out stronger in the end. Have a great weekend!

Want to learn more about what’s going on in our global financial system and how Bitcoin fits in to it? Come to my next free webinar on August 10th July  at 6pm to find out, ask any questions, and grab some free Bitcoin*. Click here to register.

Would you like to help spread the adoption and education of Bitcoin in the UK and even stack some Sats while you’re doing it? Well, now you can!

The Bitcoin Pioneers community, backed by Barry Silbert’s Digital Currency Group, was created to introduce Bitcoin to a mainstream audience in a meaningful way and now has members right across the UK.

We share tips, stories and ideas on how to encourage others to try Bitcoin for the first time. And, thanks to support from Luno, each Pioneer gets £500 of Bitcoin a month to share with beginners, helping them get started.

So, if you’re passionate about Bitcoin, why not join today? Click here to find out more!

All feedback on Crypto AM Daily in association with Luno is welcome via email to James.Bowater@cityam.com 🙏🏻

Yesterday’s Crypto AM Daily in association with Luno 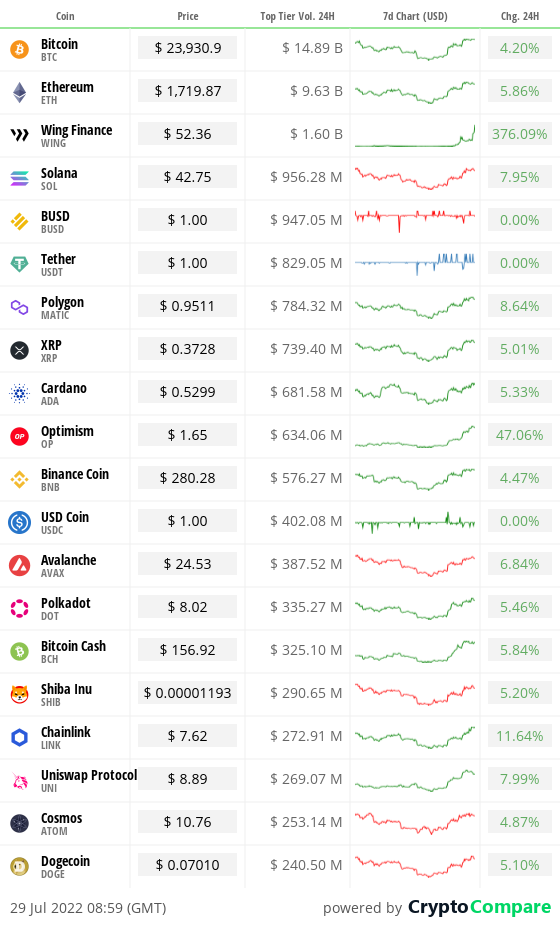 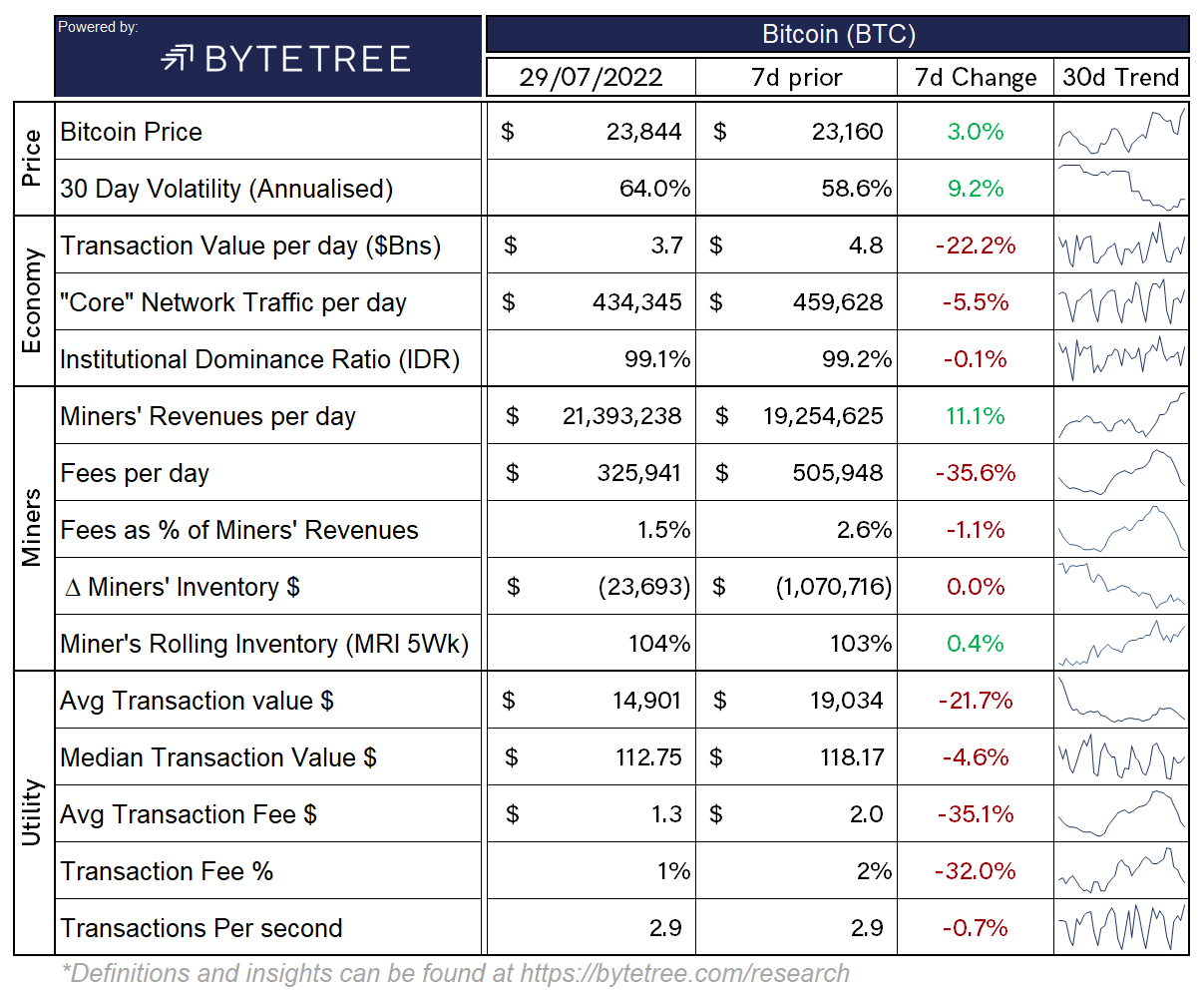 *Definitions and insights can be found at https://bytetree.com/research

The total capitalisation of the entire cryptocurrency market at time of writing is currently
$1,098 trillion.

What Bitcoin did yesterday

The total spot trading volume reported by all exchanges over the last 24 hours was $40.283 billion. High volumes can indicate that a significant price movement has stronger support and is more likely to be sustained.

Market sentiment today is 39, in Fear.

The daily RSI is currently 60.28. Values of 70 or above indicate that an asset is becoming overbought and may be primed for a trend reversal or experience a correction in price – an RSI reading of 30 or below indicates an oversold or undervalued condition.

Convince your Nan: Soundbite of the day

“I buy Bitcoin for the benefit of my kids.”

What they said yesterday

Walmart confirms it is not partnering with Litecoin

Fake news: Walmart confirms it is not partnering with Litecoin – CityAM : CityAM

Michael Saylor buys up another 5,050 Bitcoin for MicroStrategy

Michael Saylor buys up another 5,050 Bitcoin for MicroStrategy – CityAM : CityAM

Bitcoin can now be purchased using the Post Office app

Crypto AM: In Conversation with James Bowater

Crypto AM: Mixing in the Metaverse with Dr Chris Kacher