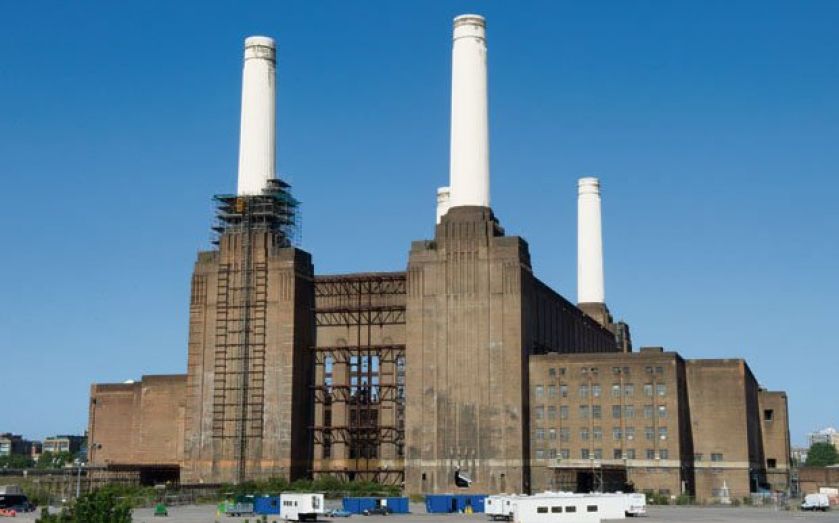 ROB TINCKNELL is leading the way up a flight of steps to the roof of Battersea Power Station’s marketing suite. “We have got to be really quiet,” he whispers, as he opens the door onto the terrace and points to a giant pole that was built to provide a home for the landmark site’s only residents – a family of rare peregrine falcons.

They used to nest at the foot of the four landmark chimneys. But with work on the south London site now powering ahead, the birds have had to make space for Battersea Power Station’s next set of residents.

Tincknell, the developer behind the site’s £8bn regeneration, gestures towards a giant gaping hole below one of the chimneys where coal used to be stored. That is where one the redevelopment’s most prized penthouses will be, he says, with a huge pane of glass that will give one lucky buyer sweeping views of the Thames and beyond.

In total there will be 254 flats perched at the top of the power station, their views as lofty as their prices, which in total range from £800,000 studios to £4m four bedroom flats, plus the penthouses for yet unnamed prices.

But after the successful sale of the first phase known as Circus West, with just four of the 866 flats left on the market, Tincknell is confident that the flats will sell fast – and to Londoners who will want to live in the scheme.

The apartments will go on sale in May but unlike the Circus West homes, which were also forward-sold to investors in the Far East, phase two will be marketed exclusively to London, a move almost unheard of among the city’s developments.

“We have no overseas launches planned whatsoever and the reason we are doing that is to attempt to capture the people who are really London-based. If you are not London based then you have got to come to London to actually buy it – we are not coming to them.”

The debate over foreign ownership of London homes has escalated against a backdrop of increasing pressure to meet the capital’s housing shortage.

But Tincknell says it should not be a question of foreigner versus Briton and calculating how many flats are sold to overseas buyers was far from black and white.

“It’s a tricky question because we have overseas buyers buying in London and UK buyers buying overseas but we always suggest it is around 50:50,” he says, highlighting that UK buyers are not just British but all nationalities living in the UK.

“It’s people for whom London is their home. To think that everybody has got to be British to buy, that is just wrong. Nearly 30 per cent of people living in London have foreign passports and that’s what’s fantastic about London.”

He also dismisses the stereotype of the wealthy overseas investors snapping up an apartment only to leave the property empty. “You have just as much chance of UK buyer buying it and then leaving it vacant.”

While it is impossible to prevent a buyer from leaving their home empty, he is adamant that the answer is creating a community where people will want to live, work and get to know their neighbours.

Tincknell, who grew up and lives deep in the Somerset countryside, has visions for turning Battersea Power Station into a village of its own on the South Bank, with its local shops, restaurants and open areas.

He has put his vision in writing by drawing up a new Community Charter backed by London mayor Boris Johnson, with “ten specific policies about how we will work and create a really vibrant community”.

“The plan is to get the retailers, residents and office occupiers working together and it’s how we do that through virtual websites, through curating events that we have organised ourselves.”

He gives a new barbecue area the group plans to build on the site as an example, where barbecues will be deliberately put in pairs “to help groups come together”.

“When everybody gets to know each other and then friends form, relationships form, marriages form – and then babies are born at Battersea Power Station.”

At this point, though sitting right beside me, Tincknell seems to be a million miles away, carried off by his utopian dream.

However, the time when the first residents will be able to move onto the site is still three years away. In October, £100m-worth of works on the restoration of the power station kicked off and in two weeks’ time, the first crane to dismantle the chimneys will be put in place.

Meanwhile, today marks the launch of the third phase of the scheme, comprising of 1,200 homes and a new high street co-designed by Frank Gehry and Norman Foster.

The pressure to deliver a project three decades in the making is huge but Tincknell is unfazed: “If we as developers can do our little bit to restore a community spirit back into the centre of our great city that is something we owe to London for 30 years of waiting.”

CV ROB TINCKNELL
■ Born in 1967 and went to school in Lyme Regis.

■ Started his career as a lighting electrician for a theatre company before retraining as a chartered surveyor at Leicester Poly.

■ In 1992, Rob joined The Berkeley Group, where he rose to become managing director of its commercial division. His oversaw large scale schemes including Gunwharf Quays shopping centre in Portsmouth.

■ In 2002 he joined Treasury Holdings, once one of Ireland’s biggest listed developers and Battersea Power Station’s previous owners through its subsidiary Real Estate Holdings.

■ In 2012, after REO fell into administration, Tincknell was appointed chief executive of Battersea Power Station Development Company by its new owners SP Setia, Sime Derby, and the Employee’s Provident Fund.