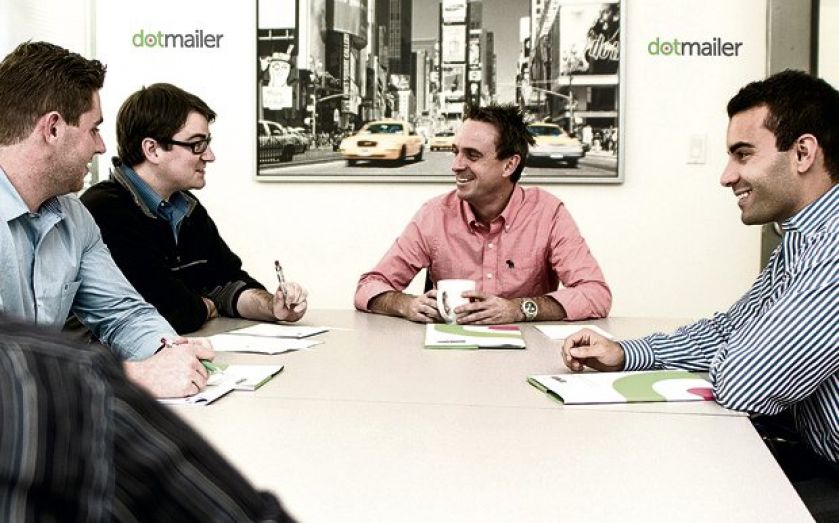 How long could you survive without email? Estimates of how many are sent globally every year range from 100bn to 200bn. And every year, dotmailer’s founder Tink Taylor gets asked the same thing: is the death of email just around the corner? It’s a question he finds laughable. Recent research by Gigaom found that 86 per cent of US digital marketers use email marketing – the highest of any channel listed.
Aim-listed dotmailer is now the UK’s largest email marketing automation provider, with over 4,000 customers, including BP, Odeon and Santander. Taylor puts a good chunk of its success down to the work put into recruitment. Every potential employee undergoes in-house tests, designed to see how well they’d innovate on the job. And cultivating the “dot family” is an ongoing process for Taylor: just last week, he tweeted a photo of the latest “staff surprise” – 4GB spy pens.

But perhaps the most unusual dotmailer anecdote is that of its inception. Having worked for IBM, Taylor decided a change of direction was in order, and he became a windsurfing instructor in Greece. “There were a lot of high-end individuals coming on holiday, who I worked with.” Taylor would mention that he’d built the windsurfing company’s website “as a bit of a hobby”, and ended up with something of a fan base. “They’d say, ‘when you get back to the UK, could you do that for my company?’ I’d always had a burning ambition to run my own business. I got the connections; it was the dot-com boom time. A group of us sat down, a natural chemistry formed and away we went.”
Now, dotmailer is known for helping businesses grow fast. It’s a byproduct of the fact it helps customers “buy back time”, says Taylor, by providing an easy-to-use platform for clients to automate their email marketing. After 15 years in the industry, he’s seen three main changes. One, budgets for email marketing now come from marketing, not IT departments. That changed the way firms like his had to pitch their services. This has also been affected by the second shift: the growth of data analytics. “We’re almost accountants,” he says, because of the volume of data email marketing can provide. Last came the development of a strategy based on automation. Clients now expect “the right emails at the right time”.
Data collection has always been very important to dotmailer. “We’ve always been quite fussy about our clients,” says Taylor. “We have to be careful about how they are using their data. Some of our competitors haven’t always been within the regulation, and they’ve paid the price.” A 2002 EU directive prohibited the use of personal email addresses for marketing purposes, and established the “opt-in” paradigm. One thing that’s intensified in Taylor’s time is the industry’s association with spam. He recalls a dinner party where a doctor made a remark about hard selling. “It’s just not true. It’d be like comparing a pharmacist with a drug dealer. It’s all about permission.”
Despite its secure position, like any business, dotmailer has had its fair share of pitfalls. “We could have made some decisions more quickly,” admits Taylor. The firm started life as a design and development company, but also had e-commerce and content arms. “We did spread ourselves quite thin, and it was difficult to compete with specialists who had the focus. We could have been further down the road than we are.”

What matters for Taylor now is the present. “We grow rapidly, but it’s hard to find quality people.” Croydon born and bred, Taylor is a supporter of the area’s Tech City – the stoic counterpart of Silicon Roundabout. “It’s London’s second tech base, and it should be much more supported by government. They love to say they’re doing something, but we could draw a lot more from industry and smaller firms, rather than just always turning to the biggest players.”
Taylor, who serves on the UK Direct Marketing Association’s Email Council, is a good example of the expertise that can be found in small business. Currently part of a global discussion on the future of email, as far as he’s concerned, it’s the “grandfather” that’ll “always be there. Email was disruptive many years ago, so now it’s easy to knock it and believe something will replace it.”
But a dramatic shift is some way off. Taylor emphasises that most businesses are still struggling to understand how they get a return on investment from social media marketing, and points  out that many look down the wrong end of the telescope when it comes to fully understanding the channel they’re using. “Mobile marketing, for example, isn’t a channel. Mobile is a device, and it’s a carrier of email.” A survey from E-consultancy earlier this year found that digital agencies are predicting year-on-year email marketing revenue growth of 30 per cent in 2014. Taylor quips: “Long may it continue!”

It also looks like dotmailer’s destined for a long life. Taylor readily admits that, at present, they “do need to work on internal communication”. But his sense of making the most of colleagues has always been important, and his advice for any budding entrepreneur is simple: “Don’t be afraid to give up control to a strong team.” Then you can move on to things that’ll grow your business, he says. He’s also keen to impress the need to make time for interests outside of work. Indeed, his kitesurfing expertise forms his plan B. If it all went pear shaped, “I’d build a tech business that delivered recurring revenues and high margin.” Outside of tech? A business around kitesurfing. “The worst-case scenario is that I live on the beach.”