It was all about Aaron Ramsey. Mesut Ozil may have brought some tricks and flicks, Alexandre Lacazette some bustling approach play and a neat finish, but for Arsenal fans leaving Emirates Stadium the performance of their Welsh midfielder – and all that it meant – was what had tongues wagging.

Strangely for a virtuoso, all-action, eye-catching display that lifted Arsenal into third in the Premier League, there were mixed emotions for the home crowd. It was about what was and, crucially, what might have been.

The Arsenal faithful have been afforded a long time to process the news. Even before Ramsey’s impending departure to Juventus was officially announced in February, it had long been rumoured. After all, the 28-year-old’s agent had been a busy man, advertising his client’s talents to Europe’s top clubs.

Finally by 11 February they had closure: when his contract runs out in the summer, Ramsey will end an 11-year stay at the north London club and leave on a free transfer to earn a reported £400,000 per week in Turin.

Time is supposed to heal, but the delayed nature of the loss doesn’t make displays like this against Newcastle any easier to deal with. While the sense of disappointment and exasperation at his decision to move on remains pervasive there will be some secretly hoping his form evaporates to spare the pain.

No such luck. With the captain’s armband proudly strapped to his right bicep, Ramsey ran the show, emphasising the point that when his contract expires on 30 June Arsenal won’t be left with anyone like him. 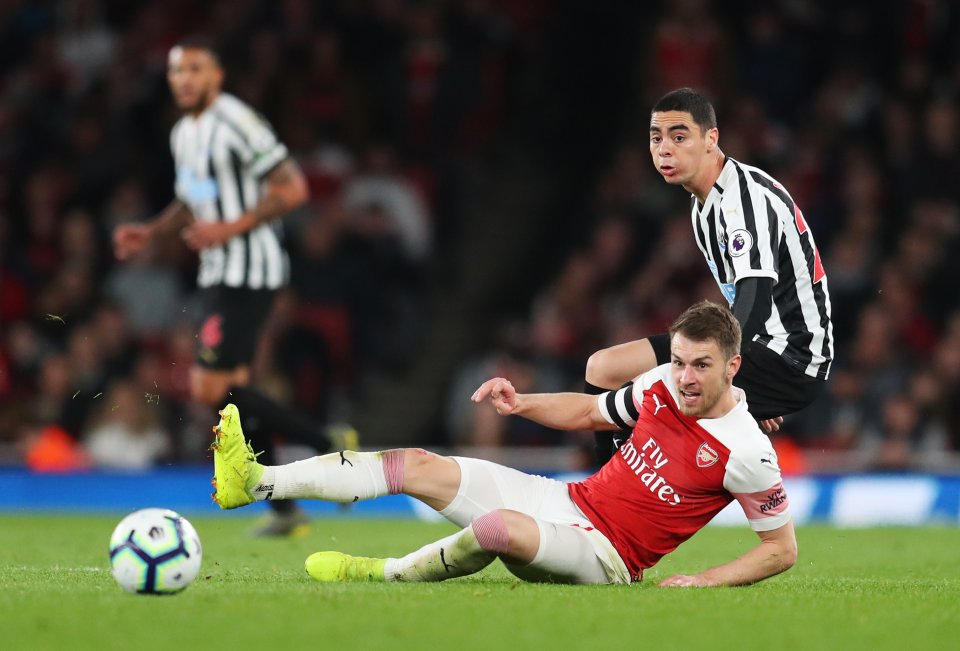 Aaron Ramsey was the stand-out player in the first half (Source: Getty)

Ramsey’s enthusiastic, non-stop, box-to-box style means that when he’s on song he gives the impression of being everywhere at once. He makes tackles and interceptions and begins moves with deep passes out wide before charging up the pitch to knit play together in dangerous areas.

It was he who held the key to unlocking Newcastle’s well-drilled and compact 5-4-1 formation, bringing a sluggish start to life in the first half.

Ramsey appeared to have opened the scoring when he steered in a flicked-on corner in the 12th minute, only for it to be chalked off for a foul by Sokratis. But, not to be deterred, he produced a trademark opener, following in a lovely flick around the corner to Lacazette to slot a loose ball into the bottom corner via the inside of the post with his left foot.

The goal triggered an excellent period in which Ramsey, Ozil, Sead Kolasinac and Alex Iwobi monopolised the left-hand side with some slick interplay. Only a brilliant Matt Ritchie header off the line prevented Lacazette from doubling the lead before the interval.

Ramsey left the pitch to a hearty round of applause in the 67th minute with a possible knock, but his record of Arsenal going unbeaten when he scores was extended to 27 matches when Lacazette combined with substitute Pierre-Emerick Aubameyang to lift in a second goal.

When he joined the bench Ramsey had completed 69 passes – 10 more than anyone else at the same point – underlining his undoubted influence. 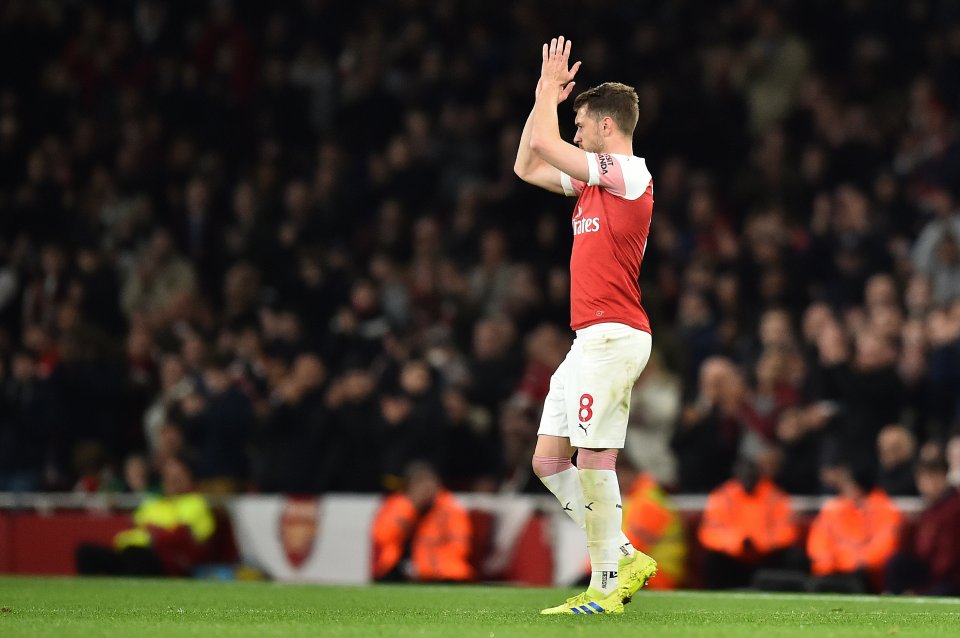 Ramsey was forced off with an apparent injury (Source: Getty)

Matteo Guendouzi and Lucas Torreira have both enjoyed promising debut seasons for the Gunners. Ozil, now brimming with confidence and once again drifting past opponents with ease, looks back to close to his creative best. But currently Arsenal have no one like Ramsey.

Having leapfrogged rivals Tottenham into third place for the first time this season with an excellent performance and a 10th successive home league win it was a night bubbling with optimism for the Gunners.

With form seemingly stabilised, a league run-in which doesn’t feature a single top six rival and a Europa League quarter-final against Napoli to look forward to Unai Emery is enjoying a sweet time. But, thanks to Ramsey, this routine 2-0 win certainly had a tinge of the bittersweet about it.