Nestled among the replica kits and Javi Gracia T-shirts at Watford’s club shop is a version of “Guess Who?” in which the board game’s usual cast of characters is replaced with current Hornets players.

Rival supporters might quip it’s an apt product for a team whose revolving door policy to recruitment can make it difficult to keep up to date with their latest personnel.

But jokes at Watford’s unconventional approach have dried up this year as the Hertfordshire outfit have continued to punch above their status as one of the lowest-earning Premier League clubs.

Despite losing Brazil forward Richarlison to Everton in a club record £50m deal last summer – unearthing gems and selling at a hefty profit is a key facet of their strategy – a flying start set up their best top-flight season since the glory days of the 1980s.

And although newly-crowned champions Manchester City bar the way at Wembley, Watford could end 2018-19 on a high by lifting their first major trophy in Saturday’s FA Cup final.

It would be the latest endorsement of owner Gino Pozzo and chief executive Scott Duxbury’s methods. Having cemented their status as an established Premier League side, they have designs on the top 10.

With matchday income limited by the size of their 21,500-capacity home, Vicarage Road, and broadcast income negotiated by the league, the revenue growth they seek must come largely from commercial streams.

Chief commercial officer Spencer Field has been tasked with quadrupling income from sponsorship and other partnerships, with other upwardly mobile mid-table clubs such as West Ham seen as a benchmark. 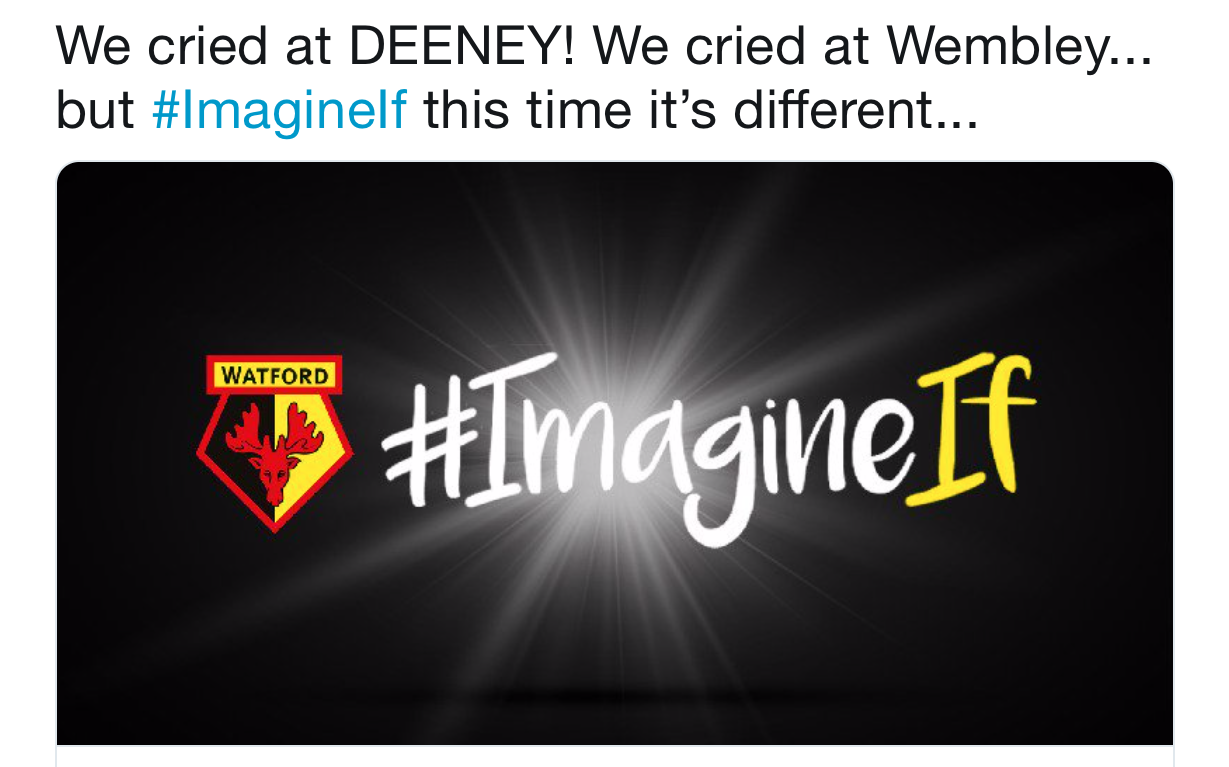 That means looking beyond Watford’s Hertfordshire heartlands and targeting brands with a global outlook willing to pay high six- or low seven-figure sums, rather than high five- or low six.

To attract that business, Field says he identified a need to “change their digital footprint”, so chief marketing officer Graeme Ford was hired early last year to overhaul the operation.

The club’s belief is that applying the innovative ethos that has served them well on the pitch to communications, particularly social media, can lend them another edge on their rivals.

It’s about “being smarter”, Ford tells City A.M. “If we do the same things as the Big Six they’ll always be bigger than us. We have to find ways where we can be different, go against conventions.”

One of Ford’s key gambits was to commission a “digital audit” from Seven League, a consultancy he worked with in his previous role with the NBA, for advice on how to engage a wider audience.

The verdict? The club needed a change in outlook. “Our content was basically made by Watford fans for Watford fans,” says Ford, “and that alienates a significant amount of people.”

They had been aping the Big Six – Manchester United, Manchester City, Liverpool, Chelsea, Arsenal and Tottenham – only without the budget. Instead they needed to think more carefully about the objective of each Twitter or Facebook post.

Gone are post-match interviews with players, since they are already available from broadcasters. And, observes Ford: “When was the last time anybody said anything interesting there?”

An example of what they now aim for presented itself more by accident than design, when a post last summer about the club giving shirts to Watford fans who went to all 19 away games went viral.

“That ticked all those boxes and that’s how we think when it comes to digital,” says Ford.

Growing audience overseas can unlock the commercial deals that Watford seek, so emphasis has been placed on engaging more followers in India, China, the United States and South America.

To that end, Ford’s team has expanded to include a Spanish and Portuguese speaker to converse with fans in territories in which the club likes to scout for playing talent.

Goalkeeper Heurelho Gomes is from Brazil, forward Roberto Pereyra from Argentina, midfielder Adalberto Penaranda from Venezuela, while Gerard Deulofeu is the jewel in an Iberian contingent that includes head coach Gracia. 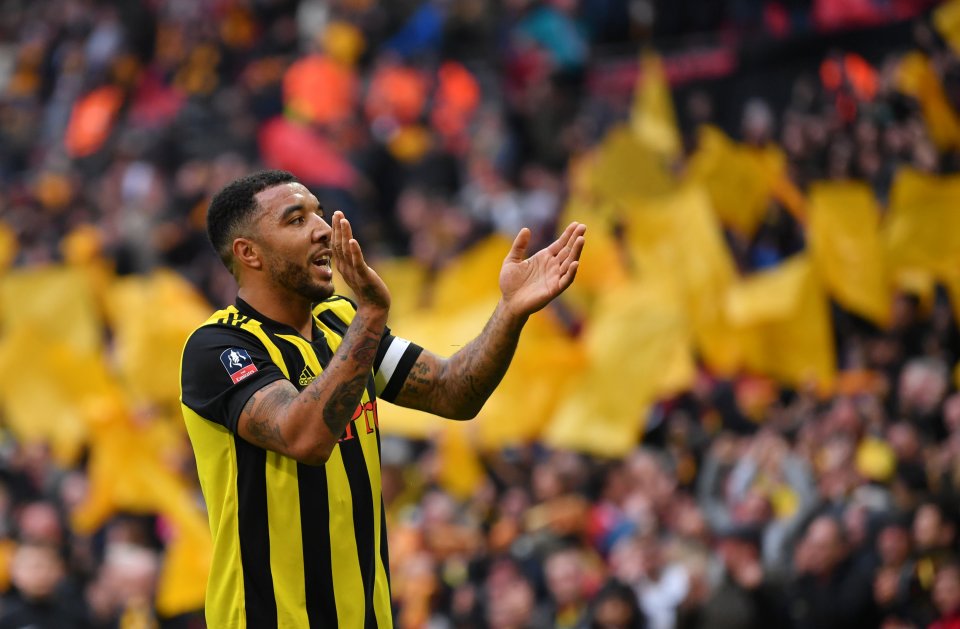 Watford have also mined data to better understand what fans in different countries look for in their footballers, so that they can tailor content accordingly.

Watford have also prioritised a change in voice on social media as they seek to gain new fans without shedding their existing supporters.

Ford – like Field, a Hornets supporter himself – cites Roma as a club who produce distinctive and compelling content, although he says he doesn’t want his operation to mimic them.

He says clubs should talk to fans in the same way they talk – Watford’s modest size means they can be more light-hearted – and empathise after a bad result rather than going silent.

“After a defeat we put up a picture of [defender] Adrian Mariappa looking crestfallen at having lost with the comment ‘we know how it feels’,” says Ford. “That does really well. People appreciate when you suffer with them.”

So far, Watford’s new strategy has been a success. Key metrics are improving month by month, watch time and viewing minutes are increasing, and following in India has grown 20-fold.

Reaching the FA Cup final for the first time in 35 years has also helped: semi-final weekend swelled audience by 20,000. Pozzo and Duxbury have taken note. “The challenge now is do it faster,” says Ford.

It hasn’t all gone according to plan. An attempt at Twitter repartee with Gary Lineker turned sour and ended with Duxbury taking over the feed to issue a public apology to the Match of the Day host.

Then there was an attempt to capitalise on leaked images of their new kit by posting a spoof design as an April Fool’s joke. Fans ended up loving the fictitious design, although Watford salvaged the situation and capitalised on the interest by then launching the real new kit. 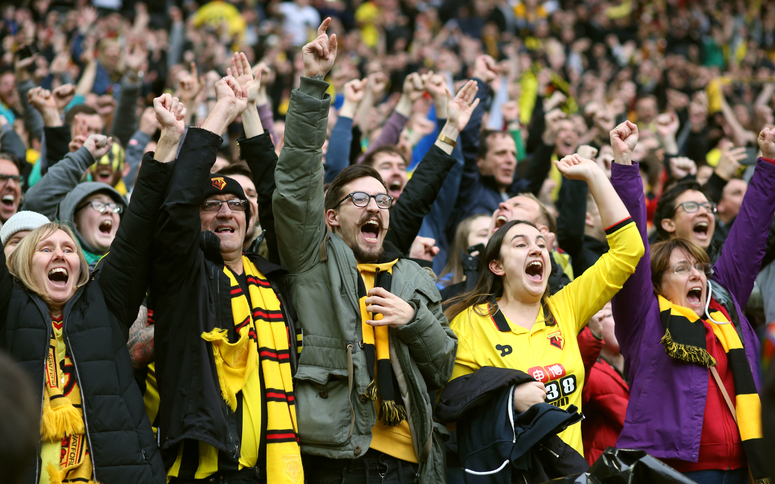 Ford says they want to take risks. “If it doesn’t work, fine. It doesn’t matter. Something will come up in an hour’s time that will trump anything we’ve done. I like it when my team come to me with an idea that makes me a little twitchy, because it means that it’s not safe and it might do something.

Of the club’s new voice, he says: “There are certain fans who don’t love it but hopefully there are a lot more who do.”

Best of the rest

Watford have big plans. The club want 2m social followers as soon as possible. Winning the FA Cup would fast-track that project, bring European competition and, with it, new commercial deals.

“In many ways, the biggest impact would be getting to the group stage of the Europa League,” says Field. “We’re already seeing brands talking to us about what we can do for them if we were in that competition.”

Whatever the result, Ford’s team have their message ready: “This is just the beginning. Yes, right now this is a once-in-35-years thing, but our expectation is to be in the semi-finals relatively regularly.”

Beyond that, Watford will keep to their own idiosyncratic path as they look to fulfil Pozzo and Duxbury’s stated goal of being the best of the rest in the Premier League.

“There is the top six and we will never be able to compete with them on a financial scale, so we have to be smarter than them. And there are other clubs with loads more money than us. But if we can be smart we can achieve what we’re trying to,” says Ford.

“If we bring in an extra £10m-15m a year in commercial revenue, in our model that’s a player we can turn into £50m down the line. It’s not just growing commercial revenue for the sake of it, it’s to make the club work on the pitch.”