On the up and in the cup: Frank Lampard has turned Derby County into giant-killers as they look to claim third Premier League scalp 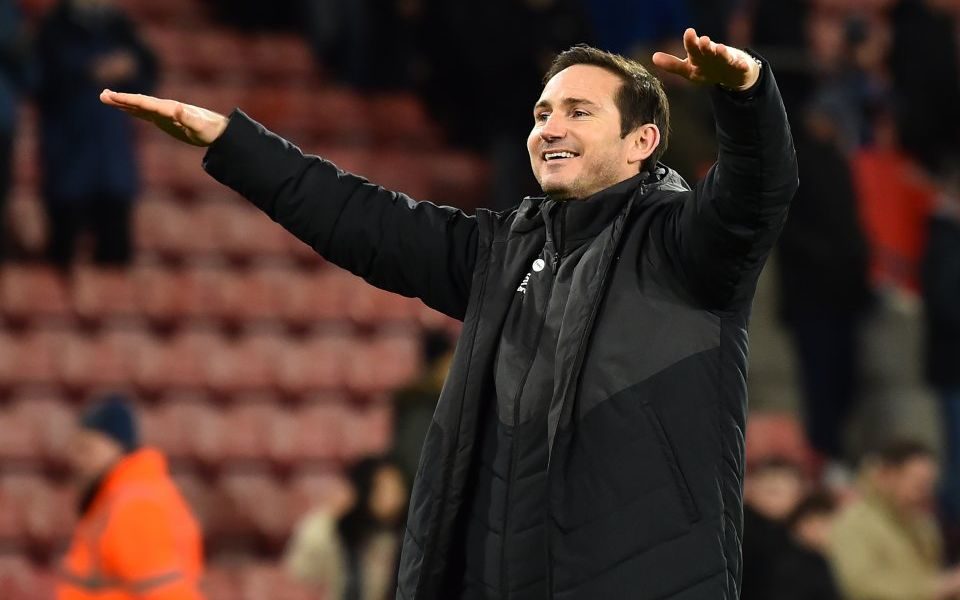 Earlier this week Frank Lampard brushed off talk that he could be the man to replace Maurizio Sarri at Chelsea, anid speculation over the Italian’s future following a turbulent start to 2019.

The notion that Lampard could be ready to take on such a big challenge at his former club is testament to the job the ex-Chelsea midfielder has done during his seven months at Derby County.

The Rams are firmly in the hunt for promotion from the Championship but it is their impressive runs in both domestic cup competitions that have really caught the eye – and added intrigue to their FA Cup fifth-round clash with Brighton this weekend.

Earlier in the season, Lampard guided Derby to a famous win at Old Trafford, eliminating Manchester United from the EFL Cup on penalties following a stirring 2-2 draw.

That success earned the 40-year-old an early return to Stamford Bridge where they put on a similarly tenacious display, although this time they would fall narrowly short, coming from behind twice before eventually losing 3-2.

Derby’s cup heroics didn’t stop there, though, and Lampard roused his side for another giant-killing when the FA Cup rolled around.

Having gone two goals down to Southampton in the third-round clash at Pride Park, they pulled it back to 2-2. The replay brought feelings of deja vu for Saints fans, as their side again surrendered a two-goal lead before Lampard’s side won on penalties.

Following that triumph, Derby dispatched Accrington Stanley in round four and now face more Premier League opposition when they visit Brighton on Saturday for a place in the quarter-finals.

As well as cup pedigree, Derby take a great run that has seen them lose just twice in 15 matches – beating high-flying Norwich along the way – into their trip to the south coast.

While they sit outside the play-off positions on goal difference, the battle for promotion in the Championship is as fierce as ever; they are only 10 points off leaders Leeds and have a game in hand.

Derby reached the play-offs last season but a repeat this year – combined with their impressive cup results – would be even more remarkable given the cost-cutting measures the club undertook last summer.

On his arrival Lampard agreed with owner Mel Morris to cut expenditure and they even made a profit on transfers, selling star striker Matej Vydra to Burnley for £11m as well as letting senior players such as Andreas Weimann and Cameron Jerome leave in order to focus on youth.

Their most expensive signing was £5m Martyn Waghorn from Ipswich, but Lampard has proved a canny operator in the loan market, using his and his assistant Jody Morris’s connections to bring in Chelsea youngsters Mason Mount and Fikayo Tomori as well as Liverpool’s Harry Wilson.

Mel Morris has pumped more than £100m into the club since taking control in 2015 and Lampard has always insisted this was a long-term project for him. While he is dreaming of a return to the Premier League this year, it is not an expectation.

“It’s hard to say that we’ll get promoted,” Lampard told the Telegraph. “That’s the dream, we’ll try hard to achieve it, but I’m here for a much longer project than that, to help build, to help youngsters through.”

Promotion is a subject that will be left on the back-burner this weekend, though, as Derby look to claim their third Premier League scalp of the season.

Brighton present a stern test for the Championship side and their top-flight credentials, although the hosts may be preoccupied with their own place among the elite given their alarming dip in form.

In recent weeks the Seagulls have slumped to defeats against Burnley and Fulham and needed a replay to get past West Brom in the previous round.

Chris Hughton’s side have taken just six points from a possible 33 in their last 11 league games, with their only two wins in the last nine fixtures coming in the FA Cup.

Derby look ready to cause another upset as they prepare to come up against some familiar faces. Brighton still feature a number of players who secured promotion from the second tier almost two years ago, including Lewis Dunk, Dale Stephens, Glenn Murray and Solly March.

For Lampard, too, the Seagulls may jog the memory: they were the opposition when, as a 17-year-old on loan at Swansea from West Ham, the future England stalwart scored his first senior goal.

With four FA Cup medals from his playing days, he appears to have instilled that winning mentality in knockout competitions into his new charges.

Masterminding another victory over a Premier League side would not only underline his team’s cup pedigree, it would also fuel more talk of Lampard operating in the top division again sooner rather than later.