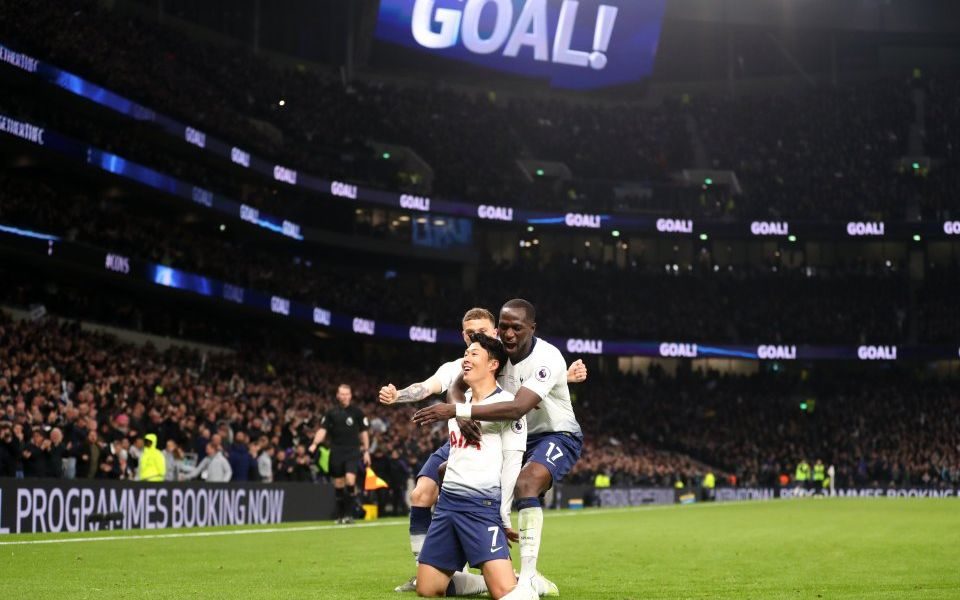 It was a night that the 59,215 fans inside the Tottenham Hotspur Stadium will never forget.

It may have come eight months later than expected, but victory in their new home proved well worth the wait as it reignited their hopes of a top four finish.

The Tottenham players walked out onto the pitch at their new ground for the first time accompanied by the sound of “Oh when the spurs go marching in”, while there was also a performance from the local Gladesmore Community School choir, epitomising the stadium’s efforts to help regenerate the area and inspire the young people of Tottenham.

Despite coming into this game with just one point from a possible 15, the new stadium provided Spurs with a welcome burst of positivity, amid a difficult run that may not have receded had the team seen out the season at Wembley.

The win was Tottenham’s eighth consecutive top-flight victory against Crystal Palace and the first time they have beaten the same opponent in eight successive Premier League games.

Second-half goals from Son Heung-min and Christian Eriksen ensured that the run against their London rivals continued and earned Spurs a much needed three points, after going five games in all competitions without a win.

It ensured that Mauricio Pochettino’s side stayed in the driving seat for a top four finish, as they moved back ahead of north London rivals, Arsenal – whose stadium can be seen from the top tier of Spurs’ south stand – and stayed above Chelsea, who beat Brighton 3-0.

The £1bn stadium, which will also host two NFL games per year for 10 seasons thanks to the first-of-its-kind retractable pitch, has been designed to create a noisy and hostile environment by allowing chanting to reverberate around it.

Throughout the opening ceremony and first stages of the game the increase in volume was notable. But as Tottenham struggled to break down the Palace defence, tension began to creep in and the prospect of dropping more points became the primary concern.

The travelling fans were not about to let the stadium fall quiet though as the Eagles supporters sang throughout, questioning if “this is the Emirates?” in a jibe at two of their London rivals.

Tottenham fans found their voices again after Son opened the scoring in the 55th minute, his shot deflecting in off of Luka Milivojevic.

Palace made Tottenham’s first game at their new ground uncomfortable, despite what the score line suggested. Roy Hodgson has turned his side into a well-oiled, counter-attacking, away team.

Coming into this game they had won six games away from home, including at Manchester City, giving them the sixth-best record in the Premier League.

Palace defended resiliently until they were caught out by a deflected effort, of which they could do little about.

The second was similarly fortunate. Harry Kane looked for a penalty before the ball fell to Eriksen and after referee Michael Oliver waved play on the Dane found the back of the net to seal the 2-0 win.

Palace had opportunities on the counter-attack but they were few and far between, and after having all but guaranteed their top flight status last weekend, could afford to allow Spurs their night of glory.

Moussa Sissoko’s time at Tottenham has mostly been marred with disappointment, but the Frenchman is finally starting to find his feet after being handed a run in the team by Pochettino.

The £32m midfielder has failed to impress in wide positions, but since the departure of his namesake Mousa Dembele in the January transfer window, he has made the central midfield position his own.

His similar physique and ability to run box-to-box for the entire 90 minutes, picking up loose balls, making important interceptions and regaining possession has meant that the departure of long-term mainstay Dembele has been largely masked.

With 10 minutes to go he made a crucial interception that warranted the fans cheering his name – something not many of them could have imagined happening 12 months ago.

He epitomised Tottenham’s determination to take the three points from this match and get them back on track in the race for the all-important top four.