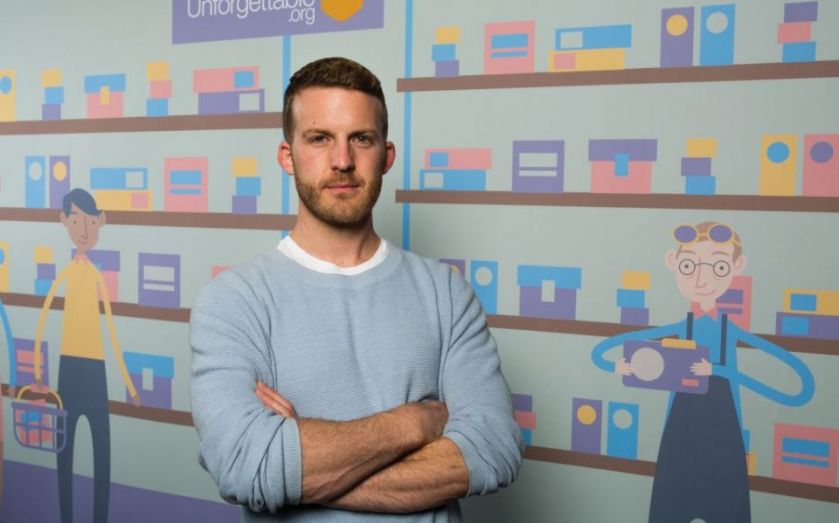 When James Ashwell was 24 years old, working for Accenture in London, he got a phone call telling him his dad was dead. “I remember literally falling to the floor; it took all the wind out of me. I put on my coat and that was it. I ended up never going back.” It wasn’t until Ashwell was back home in Birmingham with his family that he came to the realisation that his mum, Fay, had dementia, aged just 54. “It happens to a lot of people. You notice things, memory problems, behaviour changes – but it doesn’t really click. Or it does, but you don’t accept it.”
Before he knew it, Ashwell was home for good, caring for his mum. He did so full-time until his thirtieth birthday –  17 February 2012, when she passed away. “The truth is that it was much harder than people realise. I was in my mid-20s, I was alone, and I was having to deal with something I didn’t really understand at the point of crisis. That’s incontinence, wandering, going in ambulances… but everyone who cares for someone with dementia has to deal with this. They’re going through the same thing but they’re hidden. Six million of us will care for someone with dementia in our lives; one in six of us will get it. That’s too many for it to be kept behind closed doors.”
Ashwell is now the founder of Unforgettable, a business that aims to improve the lives of those with dementia and their carers through products, practical advice and a peer community. “People often say to me, ‘isn’t it a niche business?’ And I have to say ‘no, actually it’s not’ because 40 per cent of people have a relative or close friend who has dementia.” Unforgettable’s product focus is crucial. Groups like The Alzheimer’s Society do a superb job in providing emotional and social support, but a poll Unforgettable did a month ago found that 87 per cent of carers think there are no products out there to help them. “It is a forgotten market. There are 750,000 births in the UK each year. Meanwhile, 225,000 receive a dementia diagnosis. When was the last time you saw a dementia shop on the high street?”

Of course, there are numerous products out there to help sufferers and carers, but they’re rarely easy to find and never in one place. Often developed by people who have had first-hand experience of the illness, marketing budgets and economies of scale never come into play – so people just don’t know about them, or they’re expensive to produce and to buy. Unforgettable is changing that. By January, it’ll have 2,500 products available, with peer reviews and ideas alongside. The site already has, for instance, 500 activity ideas for people with dementia.
“Let’s say someone is in the mid-stages and you’re dealing with incontinence. We’ve just brought over this really exciting product from the States – incontinence pants with sensors in them. Now that means that, instead of having to sniff your dad’s bum, your iPhone vibrates and tells you there’s been an accident. For a lot of people, that’s going to be a lightbulb moment. It’ll mean they can cope. We’re not about telling people what they should and shouldn’t be doing; we want to give them the choice. People can stay in their own home for longer than they think, and that’s why products are so important.”
Unforgettable’s range spans from landline phones with photographs of family members connected to speed dials to suction grab bars that can be moved. A newer product is insoles with GPS trackers in them and, because Ashwell knows how frustrating it is giving a grown woman a Disney princess puzzle to do just because it’s simple, personalised jigsaws. He is also launching and exploring legal and financial services – like pro forma power of attorneys, insurance policies tailored towards dementia, and mental capacity and psychiatric tests. “It can be made easy and simple for people. And a lot of the time, it’s just about raising awareness. Lots of people, for instance, don’t know that you’re VAT exempt if you’re caring for someone with dementia.”
But Unforgettable’s specialness goes further than the products – it is ingrained in its model. The above tells you one half of Ashwell’s story. The other side is that, as a 24 year-old management consultant, he was doing rather well. Working with BP on its Angolan operations, he was helping the oil giant re-route 10 per cent of the value of its supply chain to the Angolan people. Progress went from bringing the production of steel pillars for the rigs into the country to a whole ecosystem of manufacturing. With welders, machinery and kit to hand, Angolans could build their own sewage systems, for instance – without having to rely on South Africa. “I happened to be working pro bono for The Alzheimer’s Society at the time, and I just thought, hang on a minute, this is incredible. If big businesses gave a monkeys, the impact would be far, far greater than what any charity or NGO can deliver in 100 years. From then on, I was really fascinated by the power of business to create social change.”
While caring for his mum, Ashwell remembers having “really long” debates at night with his brother about capitalism. “He’d argue that it was failing; I’d argue that it was the biggest creator of wealth in history.” In the end, he came up with something he thought he’d invented: social enterprise. “I called it a ‘corparity’ (corporate charity).” After his mum died and he moved to London with his business idea, Ashwell was approached by Bridges Ventures and the Big Issue – and found out that he was 25 years too late to invent social enterprise. “But it was amazing because I suddenly felt like I had a home for Unforgettable. I had a passion for a business I really believed in, and a corporate structure that I think is suitable for a twenty-first century social business.” Unforgettable is set up as a benefit corporation, which “enables us to recruit incredible people who have the talent, but also really believe in what we’re doing.”
In 2016, Unforgettable will expand into the US. In two years’ time, Ashwell is intending to have a global business, with plans for Europe and Asia in 2017. “I very strongly believe that when I’m an old man and I’m flicking through the news, the world’s leading businesses – the biggest and best we’ll have – will be social businesses, delivering long-term, sustainable value to shareholders. That is the future.”
The Unforgettable team is growing fast. If you'd like to make a difference, get in touch with Unforgettable to find out more. www.unforgettable.org

Company name: Unforgettable
Founded: 2014
Number of staff: 10 (and recruiting five more right now)
Job title: Founder
Age: 34 (ouch!)
Born: Birmingham (don’t take it against me)
Lives: London Bridge
Studied: Engineering, Loughborough University
Drinking: Fruit smoothies (to my dentist’s disapproval)
Eating: Anything healthy and grown in my small London garden!
Currently reading: Telling Tales About Dementia, by Lucy Whitman, and The Places that Scare You, by Pema Chodron
Favourite Business Book: Building Social Business, by Muhammad Yunus
Talents: Raising money, not listening to “no”, persuading people, doing silly sports
Heroes: Muhammad Yunus (invented social enterprise); Matt Spenceley (extreme skier); my mum (lived bravely with dementia)
First ambition: To do something meaningful with my life
Motto: “If at first you don’t succeed, try, try and try again!”
Most likely to say: “Really.” I am a positive person and overuse superlatives!
Least likely to say: “Don’t worry about it” – I worry about everything!