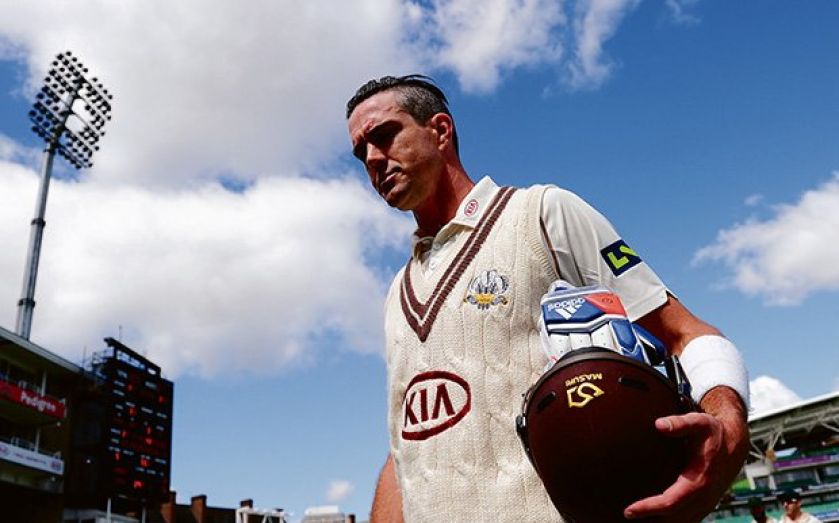 ■ Batsman said to have lost £250,000 ■ Strauss offered him ODI adviser role ENGLAND exile Kevin Pietersen last night accused cricket bosses of betrayal after the maverick batsman was told he will not be considered for an international recall this summer. Pietersen believes he was promised a route back into the England reckoning if he sacrificed a lucrative Indian Premier League stint and scored an avalanche of runs in county cricket – something he delivered with a career-best triple century for Surrey against Leicestershire on Monday. But on the evening of his astonishing knock the 34-year-old was told his ostracism from the England side would continue, with new director of cricket Andrew Strauss yesterday citing long-standing trust issues between the England and Wales Cricket Board (ECB) and Pietersen. Strauss, who clashed with Pietersen while they were team-mates, instead asked him to demonstrate his willingness to build bridges by taking up an advisory role on one-day cricket – an offer which was rejected. “I just find it incredibly deceitful what has happened to me,” said Pietersen, who has scored 8,181 runs in 104 Tests at an average of 47.28. “I had two phone conversations with [incoming ECB chairman] Colin Graves and he was crystal clear in saying I had to get a county, score runs and that there was a clean slate. “He said that when he comes in as chairman he wants the best players playing for England. I have done everything I can. Was I lied to by the chairman? Only he can answer that. “What has happened since Colin told me if I scored county runs I would be available for selection? Nobody has called me. I have given up my IPL contract, at great expense, to play in county cricket. It is horrendous to feel I have been led down the garden path. I am angry and hurt.” Former England captains Michael Vaughan and Alec Stewart, who is also director of cricket at Surrey, both condemned the ECB’s decision, echoing Pietersen’s disillusionment. “He’s been misled and mistreated,” said Vaughan. “He’s done everything that was asked of him, but taken down a path that was a dead end.” Stewart added: “Kevin has given up £250,000 on the back of Colin Graves’s comments. He did that to force his way back into the England team. “He [Graves] has had two phone calls with KP since saying ‘come and score runs in county cricket and there’s a chance’. KP has done that, so that word ‘trust’ is maybe a two-way thing. “But Andrew Strauss has made his decision and we all have to respect it, whether we agree with it or not. I think we’ve seen KP in an England shirt for the last time.” Strauss defended the stance, suggesting there was no short-term solution to the breakdown in trust, but confirmed that four-time Ashes winner Pietersen had refused the first tentative offer of reconciliation by declining the position with the one-day side. “If I am honest, I saw it as a potential way of starting to build trust again,” said Strauss. “At the moment he doesn’t feel as though he is able to take up that position. I understand it but I hope in time he might reconsider. “We’ve got a unique situation here that has built up over a long period of time. We haven’t addressed the core issue until now. We don’t expect it to be popular with everyone but I believe it’s given us the best chance of moving forward. We all know this has overshadowed English cricket for a long time.” Strauss confirmed that Pietersen would not be considered for the two-Test series with New Zealand, which starts on 21 May at Lord’s, and the Ashes later in the summer, but suggested that future compromise was not impossible, however unlikely. “I don’t think we should rule it out,” he added. “At the moment we’re a long way apart, let’s be honest on that.” DIRECTOR OF CRICKET ANDREW STRAUSS ON… It was a very difficult decision for us to make but I felt that in some areas of international cricket he is a little bit exposed around tactics and strategy. He was undermined greatly by the fact he had done the job before. on Peter Moores’s sacking He’s one of the candidates, absolutely. It is one of the top two coaching jobs in world cricket and there are a lot of ambitious coaches who want to prove they can cut the mustard at this level. Over the next few days we’ll start approaching candidates. on Yorkshire boss Jason Gillespie He has my full backing to lead the side into the Ashes this summer. He has had a brutally tough last 18 months, with his own form and one-day captaincy. on Test captain Alastair Cook It’s the right time for Joe to take more of a leadership position and I’ve asked him to be the new vice-captain. He’s got outstanding leadership capabilities and we need him to start thinking more as a captain. on Joe Root It’s something we need to look at. There have been times when there are issues around responsibility and accountability. on a shake-up among selectors