Highlighting a decline in the number of English players in the Premier League's top four clubs, much of the 84 page report rests on a core assumption:

The report claims that "a direct relationship can be drawn between the numbers of available players playing regularly at the highest level in the best performing teams and the performance of a national squad."

And potential victories for the England team matter, because "England's matches in major tournaments are 'national moments'". Accordingly, Dyke prescribes a number of limitations on non-EU players in the Premier League.

But burrowing into the data sees a different story emerge.

Ben Southwood, head of policy at the Adam Smith Institute, finds that there is practically no relationship to be found between the time English players put in on the pitch and England's performance at an international level over more than a 20 year period. 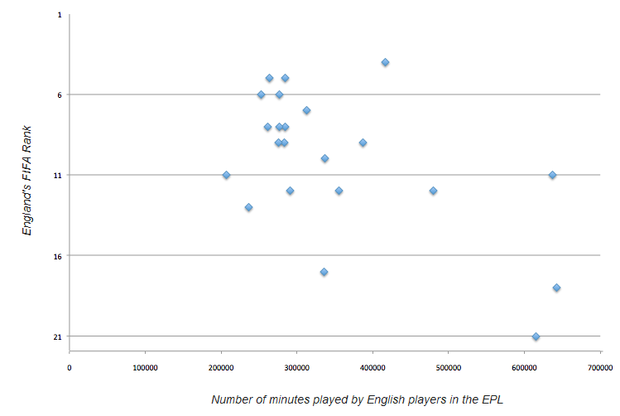 If there is a trend at all – it's that more minutes played by English players sees the English national side perform worse on the international stage.

"It may well be that less experience means a worse team, but if so it seems like it's being cancelled out by another effect: many footballers say that foreign players have raised the overall standard and this may be what's going on," says Southwood.

There is a much stronger link between more foreign players in English top flight football and English club success in Europe. As such, Southwood warns that "Dyke's policy will make English clubs worse without any likely benefits to the English national team now or down the line."