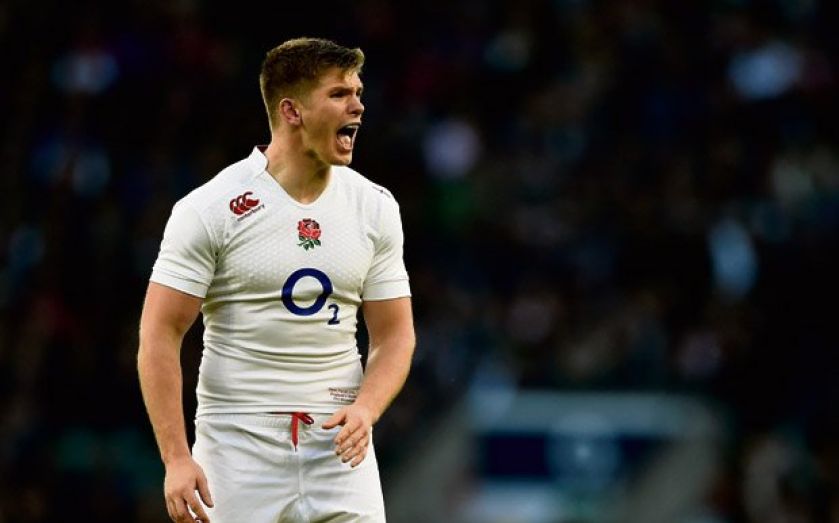 FORMER England captain Lewis Moody has urged head coach Stuart Lancaster to drop Owen Farrell in favour of Bath fly-half George Ford as the Red Rose bid to rescue their autumn programme against Samoa this weekend. The form and fitness of Saracens No10 Farrell has come under sharp focus following England’s 31-28 loss to South Africa at Twickenham on Saturday, a fifth successive defeat which marks their worst run of form since 2006. While the scalp of Samoa is not viewed in the same bracket as other southern hemisphere opponents, the clash represents a prelude to England’s final chance against Australia to land a blow to a major rival ahead of next year’s World Cup. And with preparations for the showpiece event on home soil faltering, 72-cap Moody insists the time is right to thrust Ford into the limelight and allow the 21-year-old to showcase the talents he has demonstrated at domestic level. “It is 100 per cent time to see George Ford,” he said. “We know what Owen Farrell can deliver. He is very consistent, he’s a solid performer and a very aggressive tackler but we also need to know what the back-up is and what George Ford can really deliver when he is given the chance. “Give George Ford the opportunity he needs and give him 80 minutes. Let’s see it in the game against Samoa. It’s a game England will be confident of winning and it’s about Stuart [Lancaster] having more understanding of his squad.” Lancaster’s record against southern hemisphere sides makes unpleasant reading, with just two victories in 13 matches, and England failed to drive home their second-half momentum against the Springboks after trailing 20-6 at one stage. But the 45-year-old, who was appointed in 2012 and signed a record six-year contract extension last month along with his coaching staff, is refusing to overreact despite England’s progress stagnating. “When you’ve got a team which has still got some development to do, we’ll not panic, lose our nerve or deviate from the course we’re on,” said Lancaster. “We’ve never said we’re the finished article. When we took the roles we knew we had to take a young group of players through some tough environments. I believe in the coaches, I believe in the players and I believe in what we’re doing.” And while Moody, who formed part of England’s World Cup-winning squad of 2003, echoes Lancaster’s sentiments about maintaining their poise, the retired flanker accepts confidence will inevitably be waning. “There is no time to panic and no need to panic,” added Moody. “But it is hard to get out of a rut psychologically. “England have been confident over the last three years but it’s a frustrating period. They know five defeats on the trot isn’t good and they know this autumn campaign is now very difficult as they need two wins to have any confidence going into the Six Nations. “Playing the best teams in the world is your gauge as to how good you are as a team and the game they really need to win is Australia.” WHERE HAS IT ALL GONE WRONG? Stuart Lancaster’s England entered the autumn internationals determined to land blows against the southern hemisphere powerhouses. With just 10 games to the World Cup, England’s preparations are faltering after suffering a fifth straight defeat New Zealand 20-15 England, 7 June 2014, Eden Park, Auckland A last-gasp Conrad Smith try thwarts a depleted England who had led 9-3 thanks to the boot of Freddie Burns New Zealand 28-27 England, 14 June 2014, Forsyth Barr Stadium, Dunedin Late tries from Mike Brown and Chris Ashton fail to prevent New Zealand clinching a unassailable series lead New Zealand 36-13 England, 21 June 2014, Waikato Stadium, Hamilton Wing Julian Savea scores a hat-trick of tries as New Zealand whitewash England England 21-24 New Zealand, 8 November 2014, Twickenham Skipper Richie McCaw and Charlie Faumuina touch down in the second period as the All Blacks dominate, despite Jonny May’s early try giving England the perfect start England 28-31 South Africa, 15 November 2014, Twickenham Although David Wilson, Ben Morgan and Brad Barritt all cross the line in the second half, England slump to their fifth successive defeat in Test rugby for the first time since 2006