The title race remains on. It looked very much to be slipping away from Liverpool, but as the ball trickled over the line at the Kop End it was clear fortune favoured the reds.

Rather than one of their own players, Liverpool fans were left celebrating the mistake of an opponent, as Hugo Lloris inexplicably palmed out Mohamed Salah’s header before watching it hit the unfortunate Toby Alderweireld and cross the line to make it 2-1 late on.

The second half at Anfield had been defined by the hosts’ nervousness and Spurs’ dramatic improvement, but it was the 90th minute which counted.

Tottenham’s poor run was extended. Liverpool went back to the top of the Premier League.

Such a conclusion looked unlikely in the first period as, in the words of Reds full-back Andy Robertson Liverpool “blew them away”.

Given space out wide by Spurs’ 5-3-2 formation, Robertson and Trent Alexander-Arnold prospered through regular diagonal switches of play.

Kieran Trippier stood off Robertson and the Scot picked out Roberto Firmino’s head to register a ninth league assist.

Spurs’ midfield was pulled all over the pitch by Liverpool’s fast movement of the ball, but managed to remain in the contest, with the score 1-0 at half-time.

Mauricio Pochettino may have been forced to serve a touchline ban but the Spurs boss deserves credit for the match-altering changes he made at half-time.

Spurs switched to four-man defence and immediately improved, as the away side seized on Liverpool’s indecision. 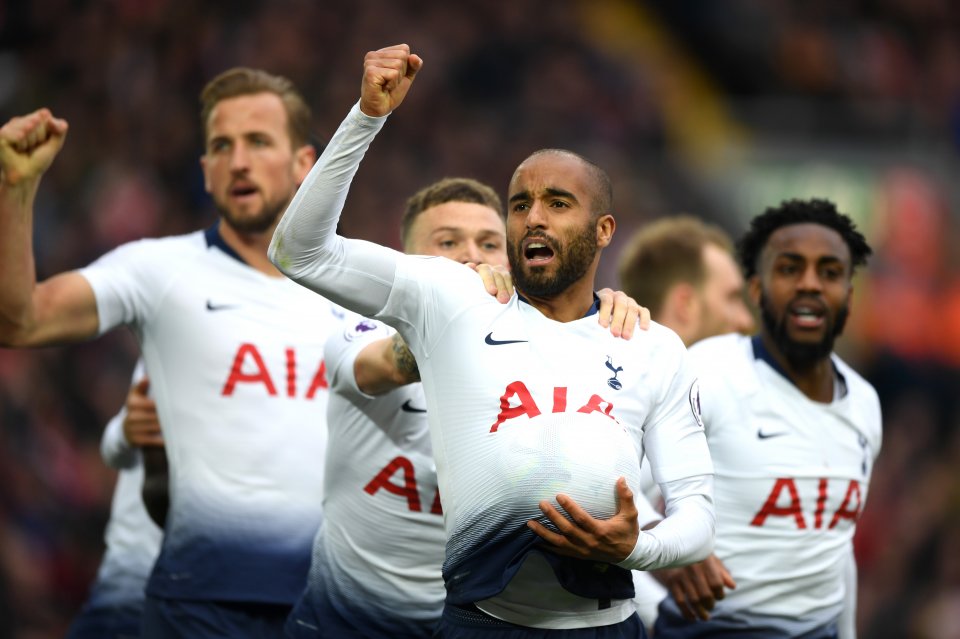 Spurs were in the ascendency when Lucas Moura scored in the 70th minute (Source: Getty)

Harry Kane’s deep passing is no longer an under-appreciated facet of his game, but his quickly-taken free-kick out to Trippier in the build-up to Spurs’ equaliser was the most prominent example of his skill.

Trippier and Christian Eriksen combined to set up Lucas Moura for a tap-in and Tottenham had more chances to move into the lead, with Moussa Sissoko firing over in a two-on-one situation and Dele Alli curling narrowly wide.

But Spurs’ recent away form is poor for a reason. With Sissoko’s spurned opportunity still fresh in their minds Liverpool summoned the courage to push forward.

Spurs dropped deeper and with Alexander-Arnold’s excellent whipped deliveries in the armoury they were bound to concede chances.

The Liverpool right-back picked out Salah at the back post and his cushioned header turned into the moment of elation around Anfield.

It’s gone from feast to famine for Pochettino’s side. After recording four successive away wins in the league, consecutive defeats at Burnley, Chelsea, Southampton and Liverpool have followed.

Lost in the jubilation of a much-needed late winner was a different sub-plot. Had Liverpool’s stadium announcer been taken at his word, the goal would have been given to Salah.

But with Alderweireld chalking up an own-goal it meant the Egyptian’s run without finding the net was extended to eight games in all competitions.

Jurgen Klopp would have hoped that not travelling in the international break would have refreshed his star man, but Salah looked indecisive and off-the-boil in front of goal.

While last season he was unerringly consistent in the penalty area, of late he’s seen his trademark left foot blunted by an apparent lethargy.

With a huge victory secure Klopp can now consider Friday’s trip to play a rejuvenated Southampton. How he’ll hope Salah can break his duck at St Mary’s.