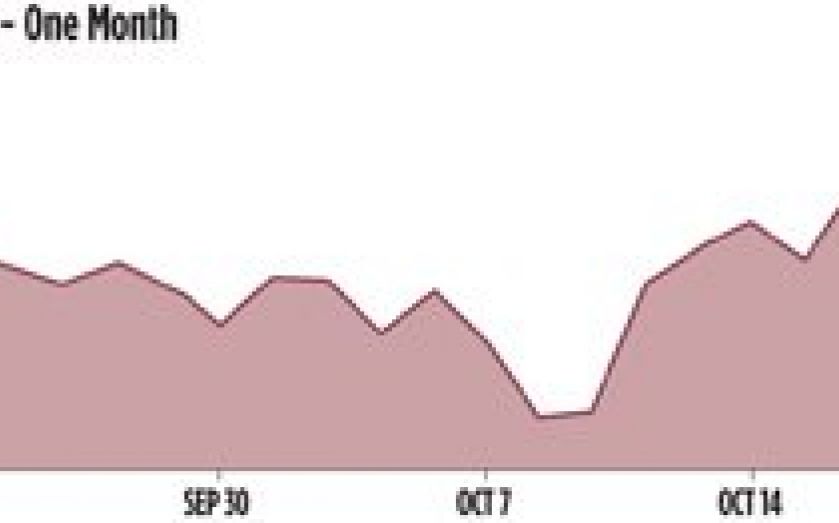 Global equities traded close to five-year highs yesterday, in part buoyed by expectations of a delay to the Federal Reserve’s tapering of its quantitative easing (QE) programme. The MSCI world index rose 0.7 per cent before dropping slightly, and the FTSE 100 posted its eighth straight day of gains, closing just below 6,652. The S&P 500, meanwhile, surged to 1,747 (close to all-time highs) before dropping off slightly.

Markets have understandably been dominated by the political wrangling in Washington of late. But after a temporary deal was agreed last week, attention has shifted back to the taper debate – when, and how sharply, will the Federal Reserve begin to slow down the pace of its monthly $85bn (£53bn) of asset purchases?

According to a recent poll by Bloomberg, many economists now expect this to take place next year, with the median forecast expecting a taper in March 2014. And the Fed’s Charles Evans strengthened this feeling yesterday, when he indicated that the US government shutdown may cause the winding down of QE to be delayed. “At the moment, we don’t expect a taper until at least the start of 2014, and this may help foster a general risk-on scenario,” says Ishaq Siddiqi of ETX Capital.

But not everyone is so confident that central bank policy will remain so loose for so long. Analysts at JP Morgan have assigned a 30 per cent probability to a December taper, while a note from Capital Economics yesterday said that “we are not convinced that the new uncertainty created by the short-term fix to raise the debt ceiling will necessarily stay the Fed’s hand in December.”

TAPER DELAY
“We feel that the Fed would be mad to start winding down its asset purchases in the near future,” says CMC Market’s Matt Basi. The 16-day US government shutdown delayed a string of key data releases, including September’s consumer price index release and non-farm payroll (NFP) figures. The latter (which is to be released today) is seen as particularly significant given the Federal Reserve’s explicit linking of monetary policy to improvements in the labour market.

“Officials will not have a good read on third quarter economic growth because of the delay in publishing September data, and they are likely to lack confidence in projections for the fourth quarter,” said Daiwa Capital Markets analysts in a note yesterday. A strong NFP reading today – well above August’s level of 169,000 new jobs, for example – may lead to increased speculation of a 2013 taper. But Basi says that “all but the most hawkish commentators have almost entirely priced out any prospect of Fed tapering in 2013, taking the edge off US data announcements to an extent.”

Beyond the delays caused to key data releases, some see the temporary nature of the Congressional budget solution as a further reason that the Fed may delay tapering. “They’ve basically just kicked the can down the road,” says Brenda Kelly of IG. “And the Fed may not want to add to this uncertainty by scaling back its asset purchases too soon.”

RISK-ON
If the Fed does indeed delay the start of its taper until 2014, the implications for traders are quite clear, according to Basi. “We’ve seen our clients quickly adding blue-chip mining equities and other cyclical names to their portfolios,” he says. US stocks have enjoyed a rally recently (see graph), and many see the possibility of QE continuing into the new year as a further positive. Siddiqi, meanwhile, sees possible gains across a host of global indices. “Germany’s DAX could hit the 9,000 mark, and the FTSE could continue its recent surge,” he says.

For the dollar, however, protracted loose policy may cause further weakening. Euro-dollar went from $1.355 at the beginning of the month to over $1.365 recently, with the dollar also sliding against a wider basket of currencies (see graph). “For the fifth straight year,” says Ashraf Laidi of City Index, “October is likely to be a losing month for the dollar, with falls likely against sterling and the Swiss franc.”

LINGERING UNCERTAINTIES
But not everyone shares such a strong conviction that the Fed will put off the scaling back of QE until the new year. According to JP Morgan, “in response to the shutdown, we place the following probabilities on the start of tapering: December 30 per cent, January 25 per cent, March 25 per cent and post-March 20 per cent.” Summing the figures for 2014 (70 per cent) does make a new year taper more likely than not for JP Morgan, but a 30 per cent chance of a December taper is far higher than the near-zero likelihood that others have allocated to the event.

Paul Ashworth and Paul Dales of Capital Economics, meanwhile, argue that a sustained pick up in the data between now and December will be decisive. “By that time, Fed officials will have plenty of data showing not only what impact the shutdown had, but also how well the economy bounced back in November,” they say. Capital Economics forecasts a 200,000 jobs gain in today’s September NFP release (above the consensus forecast of 180,000). And if the backlog of data goes on to indicate that the shutdown had minimal effect on economic activity, and this carries through to November, a December taper may be back on the cards.

Moreover, it is far from certain that the possibility of a taper has been drastically reduced by the potential for further political gridlock in Washington in the New Year. “The risk of a government shutdown was not the main reason why the Federal Reserve held off in September,” say Ashworth and Dales. “Fiscal uncertainty may not stop the Fed from tapering QE in December.”

Besides the disputes around the timing of the Fed’s taper, there is also disagreement over its likely impact. According to Basi, “if more and more people pile into equities only to be surprised by a December taper, we might see some serious losses.” Kelly, meanwhile, says that “only 50 per cent of company earnings have beaten revenue expectations so far. US equities could be ripe for a pull-back in fundamental terms, and any hint of a taper may help to trigger this.”

But analysts at Barclays are more optimistic. “The eventual withdrawal of quantitative easing will symbolise, for us, that the central bankers are giving the US economy a clean bill of health.” They point out that medium-term growth expectations are rising, and that relatively inexpensive valuation ratios may mean there is more to come from US markets.