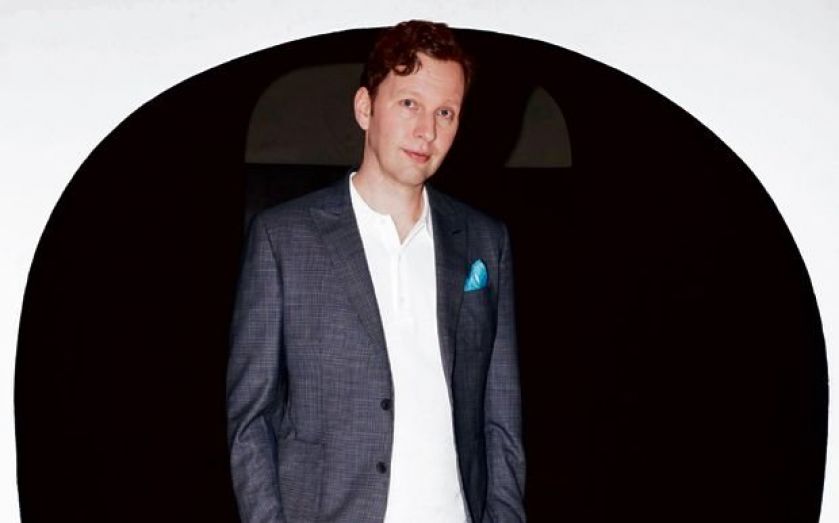 David Shrigley is best known for his pithy sketches; surreal, misanthropic depictions of modern life. His work straddles the worlds of fine art – he was nominated for the Turner Prize last year and will be the 13th contemporary artist to show his work on Trafalgar Square’s fourth plinth – and pop culture, with books of his collected works selling by the bucket-load. One particularly memorable piece from 2012’s Hayward Gallery exhibition featured a stuffed Jack Russell terrier holding a placard reading: I’m dead.

His latest commission is the gallery restaurant in Soho’s Sketch, where he succeeds incumbent designer Martin Creed (a “proper artist”, according to Shrigley). The space is a million miles from Creed’s interpretation, which was bold and stripy and slightly headachey. Shrigley’s is a shock of powder pink, all soft, fuzzy edges, like a well fitted asylum. He’s created not only the art on the walls – 239 original, uniformly hung sketches – but the crockery, too.

While I was waiting for him to have his photo taken I knocked back an espresso, which revealed the slogan “forget about it” at the bottom of the cup. On the table next to me sat a teapot with “ghosts” written on it and salt and pepper shakers are labelled “dust”, “dirt” and “nothing”.

The yet-to-be-finished restaurant is a surreal place to hold an interview. People in grey boiler-suits scurried around carrying Shrigley’s crockery, while a man in a corner buzzed up and down forlornly on an elevated platform. At one point radio DJ Sara Cox popped in to say hello. The final straw came when someone began to sand the neighbouring table, completely drowning out Shrigley’s already mumbly voice.

We retreated to the glade bar, where I perched on a low sofa and Shrigley took a gigantic wicker throne, a vantage point from which he towered several feet above me (he’s six foot four and a half). You could probably make a passable Shrigley sketch out of this scene.

I wonder what stood out about the Sketch commission? “This space is an anomaly,” he says, very quietly, “An art themed restaurant. It was an opportunity to do something in a different context. I’ve made a lot of ceramic sculpture before but nothing functional. “In a gallery the context is there. You’re looking at art. If you make a plate and put it on a wall in a gallery, to some extent it stops being a plate. Making something in the real world, that serves a real purpose, is a different type of artwork. A lot of people who dine won’t see their plate as art. As an artist you’re not in control of the work, which is exciting.”

He seems far more enthusiastic about the crockery than he is the drawings, which he talks about as if they were an afterthought: “The stuff on the walls seemed like a good way to fill up the space. There are quite a few that touch upon eating and dining but in general my work tends to be about the same kind of stuff.”

And what is that? “I guess it’s crude, comic, dark. There are a lot of missives from somebody who is misguided a lot of the time. They are the point of view of somebody who has a very singular attitude towards the world. They’re not my points of view.”

In person, Shrigley doesn’t come across as cynical in the slightest. He’s quite besotted with the idea of afternoon tea and politely demands I try a slice of his melon, which he tells me is from Alsace. He likes to walk his dog and supports Partick Thistle, the world’s least offensive football team. He has a slightly nervous disposition, giving up alcohol and caffeine for three months while he finished the latest batch of sketches after stressing over the workload. But surely his drawings point to deeprooted misanthropy?

“I’m becoming more cynical. You get grumpy as you get older. I’m more despairing of politics, but I think everybody is, otherwise you wouldn’t get all those people voting for UKIP.”

Despite being highly sought-after in London, he’s still based in Glasgow, where he was a student at the School of Art from 1988. It seems to me his work has a certain forthrightness that reflects the stereotypical Glaswegian personality. “There are definitely certain character traits in Glasgow that distinguish it. People have a malicious sarcasm that’s de rigueur when addressing strangers. But I don’t know where my inspiration is from. I guess it’s a bit like saying ‘where do you get your personality from?’ – it’s impossible. You’re just drawn to certain types of statement and expressing yourself in a certain way.”

Shrigley tweeted his dismay recently over the fire at the Glasgow School of Art, although he has been dismissive in the past of the institution that awarded him a 2:2 for his degree. How does he feel about it now the dust has settled, so to speak?

“It’s a disaster but what would have been a real disaster is if we’d lost a student. Maybe it’s a life lesson that can be overcome, something that adds a certain story to those art students’ lives and careers that they wouldn’t otherwise have. It’s heartbreaking to lose that work but stuff happens. You tend to trash your end of year degree show yourself anyway.”

Has he suffered anything similar? “Yeah, I’ve lost a lot of work over the years, although in much less dramatic circumstances. I’ve had stuff stolen and trashed. One of the most upsetting experiences was after an exhibition in Portugal where they lost everything and I never got it back. At that point I wasn’t insured, so that was it. Somebody once stole a giant handbag I made out of polyester from an art fare, which was slightly ironic.”

Shrigley will soon be getting ready to fill the most public space of his career: the fourth plinth. He will bring to life one of his sketches, a fist giving a grotesquely extended thumbs-up (the tip will reach 10 metres high). While it’s guaranteed to raise his profile, the commission has been something of a poisoned chalice for previous exhibitors. Does he have lofty ambitions for the piece?

“When I wrote the blurb about it I said I want to make the world a better place, which was kind of flippant but also sincere. You have to believe your work makes the world a better place. If the opposite is true then what are you making it for? Malicious reasons?” There’s a paradox there, between sincerity and flippancy, that seems to cut to the heart of Shrigley’s work – at once hopeful and despairing.

I’m not sure if a giant Shrigley sculpture in Trafalgar Square will make the world a better place, but it will certainly make it a slightly nicer one.