To tide us over until we’re able to travel again, we’re republishing classic travel stories from our archives. This week we revisit Laura Millar’s exploration of Coachella’s other contemporary art festival.

The locals were… curious. For the past few weeks, as they’d gone about their business around the nine cities that make up Greater Palm Springs, or hiking in the San Jacinto and Santa Rosa mountains, strange things were afoot.

A deep hole was being dug into the desert floor close to the small resort town of Rancho Mirage; sections of what looked like a wall decorated with zigzags were being erected in the sparse, rocky Adams Park next to Palm Desert; just outside Palm Springs, huge slabs of mirrored glass were being built into a structure that would eventually turn out to resemble a bungalow.

This was two years ago, in the months leading up to February 2017 – and it wasn’t the result of a new housing plan, or the beginnings of a visiting alien civilization preparing for a takeover. Rather, this was the dawning of something called Desert X, the region’s first art installation festival, an ambitious, not-for-profit project originally conceived by a former New York PR executive, who wants people ‘to see the whole area through the lens of contemporary art.’

When I visit, in late autumn 2018, none of this remains, but on February 9, 2019, the second of this planned biannual art event will kick off, running until 21 April. Similar to the first, it will consist of 15 artworks from 15 individual artists – a mix of American and international – who’ve all been invited to create something representing an issue or theme which resonates with them.

The names of this year’s artists will only be revealed a few days before the opening, but taking part has the potential to fast track their profile. 2017’s aforementioned mirrored house resulted its US creator, Doug Aitken, winning a prestigious art prize, while others, such as Swiss visual artist Claudia Comte (who installed the zigzag wall) or former Californian architect Phillip K Smith III, who created a huge, reflecting circle, have benefited from increased commissions.

Susan Davis, a straight-talking, 50-something blonde, is the New York transplant behind the whole idea. Inspired by her new surroundings – she moved to Palm Springs in 2010 and fell in love with the desert landscape and the quality of its light – she wanted to create something that showcased the region, but was also something anyone could come and see. 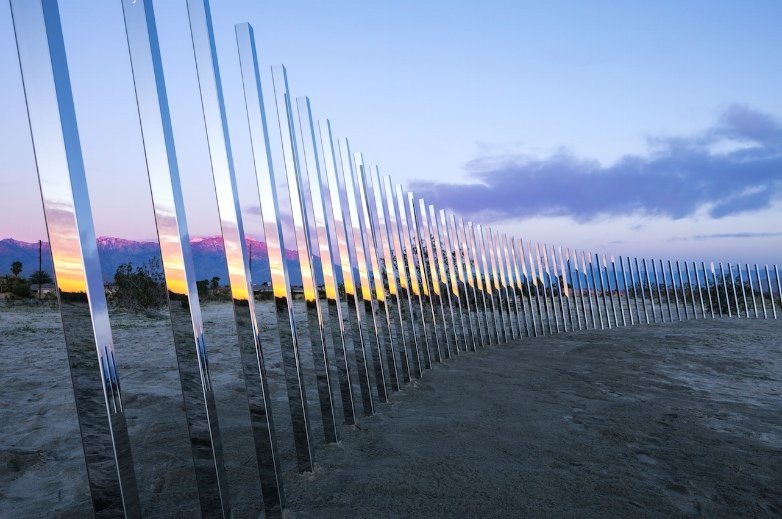 Scattering the works across a 45-mile area, and publishing a map of where they can be found, encourages people to take in the landscape as they go. “Part of the wonder of this whole thing is searching for the pieces,” she tells me over coffee at my suitably slick hotel, The Paseo, in Palm Desert. “We want it to be as much about the journey between each one as the effect of seeing the work itself.” It’s completely free, and most of 2019’s artworks will be available to see 24/7 – the first year included pieces that were illuminated at night.

Desert X 2017 was an unexpected success, fuelled by social media. “The image of Doug’s mirrored house broke Instagram!” laughs Davis. “We thought maybe around 40,000 people would come,” she adds. “We got over 200,000. It was just incredibly popular; it seemed to break down barriers of people’s fear of contemporary art, and of stuffy, silent galleries. They could engage with it completely.”

The scope of the initial festival stretched from the Whitewater nature preserve, in the west, around most of the nine cities, including Desert Hot Springs, Cathedral City, Indio and as far as Coachella. For 2019, they plan to go even further east, to the vast, shimmering Salton Sea, a natural saline lake.

I drive out to it, the road lined on one side with an endless, snaking railway – the train tracks were laid in 1876, connecting LA to Arizona – and on the other with California’s ubiquitous date trees (95 per cent of the USA’s commercially grown dates come from here).

The expanse of water covers around 350 square miles, and in the 1950s and 60s, before increasing salinity started poisoning the fish in their thousands, it was a popular weekend resort. It’s still an impressive place to stroll, or even swim; I try to envision a massive floating artwork in the middle of the sparkling water, framed by the looming mountain backdrop – it would look pretty cool.

More unusual, homegrown art can be found nearby. Near the easternmost end of the lake is an extraordinary creation known as Salvation Mountain. Looking like a cross between the animated set for The Beatles’ Yellow Submarine and a fever-induced hallucination, it was constructed by amateur artist Leonard Knight.

Made from mounds of hay and adobe clay covered in latex paint, it’s peppered with religious slogans and verses. Initially conceived as Knight’s tribute to God and faith, today it attracts a healthy mix of fascinated spectators, Instagrammers, and off-the-grid eccentrics. These last congregate a little further away, in a community known as Slab City; I venture past the ever-changing welcome sign which currently proclaims, ‘Abandon Hate All Ye Who Enter Here’ and find it has a thriving art fraternity of its own. 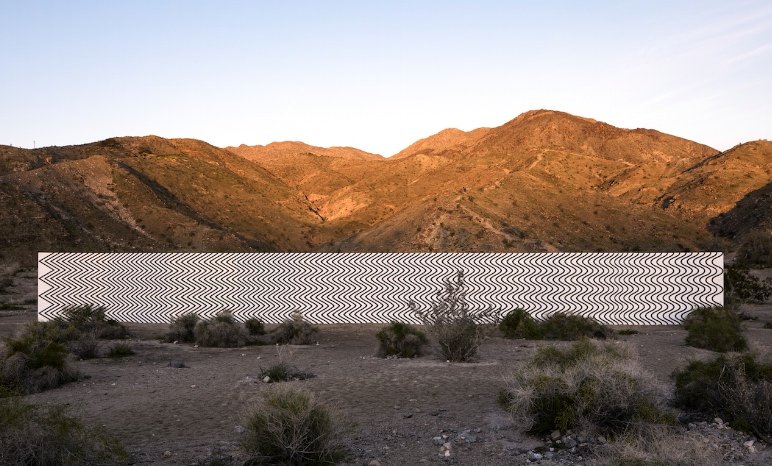 On a site nicknamed East Jesus is a makeshift sculpture park, full of weird and wonderful creations cobbled together from old TVs, cars, dolls and more, making me feel as if I’ve transported to the setting of Mad Max, or its real life equivalent, Burning Man. Afterwards, I stop off in Coachella, a small farming town home to a sizeable Latino population; it’s covered in murals by second and third generation artists.

Being back in Palm Springs, the area’s cool, kitsch resort town, and a magnet for what are collectively – and affectionately – known as the ‘gays and the grays’, feels like quite the contrast.

Home to the biggest concentration of mid-century modernist architecture in the country, some of these beautiful properties are showcased every year during Modernism Week, which will coincide with Desert X in February.

I take a bus tour of some of the most impressive, many with brightly coloured front doors in teal, millennial pink, primrose or jade, and sharp, angular roofs; these stone and steel structures seem to fit right in against their rocky, mountainous backdrop.

‘The desert is a blank canvas,’ proclaims Davis – and here both manmade and natural creations shine.