Best of travel: Eating and drinking with the St Petersburg locals 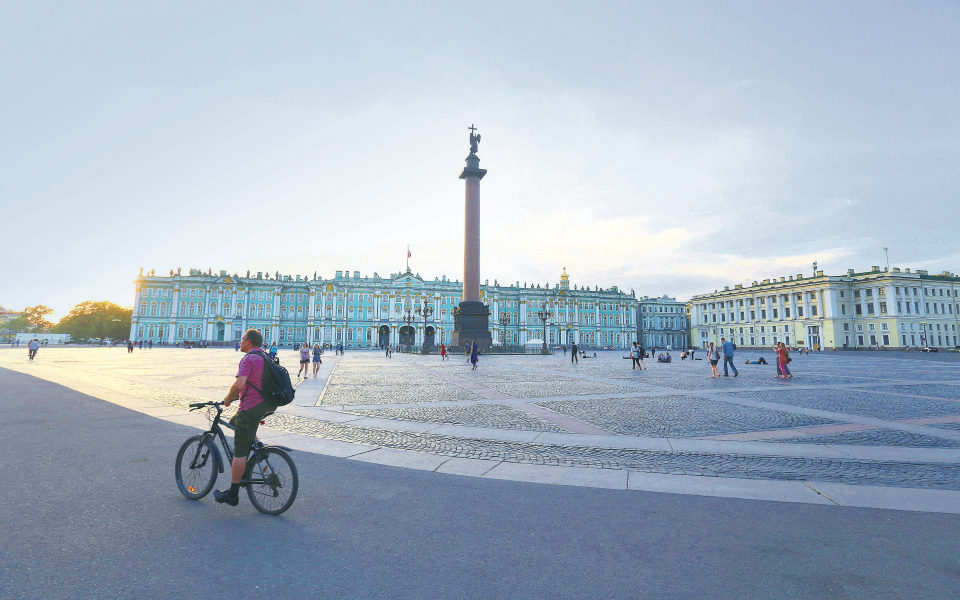 To tide us over until we’re able to travel again, we’re republishing classic travel stories from our archives. This week we revisit Ashwin Bhandari’s trip to St Petersburg, the cultural heart of Russia.

There are not many places that have left me literally gobsmacked, but the moment I stepped outside the Finljandski Train Station in St Petersburg, I knew that I had arrived somewhere special. It was here, in 1917, that Vladimir Lenin stepped back onto Russian soil after nearly 20 years of exile. He had taken the same journey that I had, travelling from Helsinki by train. But whilst I was only here on holiday, he kickstarted the October Revolution that helped establish the Soviet Union.

The station, built in the 1950s, is an exemplar of Soviet design, covered in sculptures that glorify the revolution, and topped with a needle carrying a Soviet star. It faces onto Lenin Square, where a huge statue of the Communist icon continues preaching to the masses. None of the buildings on St Petersburg’s broad streets are taller than four storeys high, and the dusky sky that greeted my arrival seemed vast above them.

As a taxi whisked me across a bridge over the frozen Neva River, the vista grew to enormity and only cathedral domes, tall church spires and the incongruous modernity of the Gazprom Tower punctured the skyline.

My hotel was on a curved canal and heading towards the river, I turned a corner to be confronted by the Winter Palace, its revelation so sudden and unexpected, that it seemed like a magic trick.

The turquoise walls and white columns were illuminated in a way that made them seem to glow from the inside. I walked into Palace Square and stood alone in the middle of that vast space, gazing at the perfect symmetry of the palace until I couldn’t feel my toes.

In the pale winter daylight, the pastel-coloured buildings, on avenues and arcades that seemed to stretch to infinity, looked toy-like in their perfection.

Peter the Great founded St Petersburg at the beginning of the 18th century. It was his “window on the West”, a statement to the world that Russia was a modern European empire, with the architecture to go with it. The city seethes with opulence and imperial ambition, which is why it was surprising to learn that it was built on a swamp.

That became a boon of sorts, as the water was drained and marshalled into canals, making St Petersburg ‘The Venice of the North’. Unlike Venice, however, the water freezes for half the year. Add to that the sight of glamorous ladies walking past in fur coats, and it was like I’d stumbled into Narnia.

In the pale winter daylight, the pastel-coloured buildings, on avenues and arcades that seemed to stretch to infinity, looked toy-like in their perfection. The first building in the city was the Peter and Paul Fortress, across the river from the Winter Palace. Walking on cobblestones through its red-brick courtyards, past old stables and barracks, it was easy to imagine squadrons of Cossacks saddling up and charging towards Sweden.

“Russian moonshine,” he said, proudly. “We call is ‘samogan’. My friend makes it in the countryside. This was the real Russian drink long before vodka came along. Everyone has their own recipe, using grains, fruit, or whatever, to add flavour.”

New Holland Island is actually the site of an old naval prison, but it has been refurbished into a sort of upmarket Dinerama, with food from across the former Soviet Union. I went for Georgian dumplings in the Mamo restaurant.

“Georgian food is very popular here,” a fellow diner told me. “It’s got more flavour and spice than most of our own dishes. But you should definitely try as much borscht as you can. It’s the most Russian meal you can find – beetroot soup, with sour cream. Every mother and grandmother is proud of their own version.”

The next day, I had the chance to do just that. Whilst planning my trip, I had told Audley Travel, the UK-based company who helped me organise my trip, that I’d love to eat with some locals whilst in St Petersburg, and it arranged for me to have lunch with Roman and Marina at their flat in the ‘sleeping districts’ (as the suburbs of St Petersburg are known).

Roman met me at the door with a shot. It looked like vodka, but tasted more like brandy.

“Russian moonshine,” he said, proudly. “We call is ‘samogan’. My friend makes it in the countryside. This was the real Russian drink long before vodka came along. Everyone has their own recipe, using grains, fruit, or whatever, to add flavour.”

We sat at the table as Marina served up bowls of bright pink borscht.

“It’s the best in the world,” said Roman with a wink. “Just like every other wife or mother’s borscht. When you’re eating it in front of them, anyway.”

It really was excellent, though, with a pleasant tang and dollop of sour cream in the middle. It was served with bellinis – tiny pancakes topped with fish eggs, and as soon as I had finished, I accepted Marina’s offer of another bowl.

“Well done!” she said, “That’s the best compliment you could give a Russian hostess.”

Next up was slow-cooked pork with onion and potatoes, and this time I could only manage one bowl.

“Russian food isn’t like light Mediterranean food,” Marina said. “It needs to make you a little bit fat for the Russian winter.”

I happily resigned myself to a second bowl when Roman suggested we wash it down with more samogan. I left feeling slightly merry and significantly fatter, which was the perfect antidote to the cold winter air.

That evening I wandered along the river, past the bronze statue of Peter the Great on horseback to Animal Farm. Not George Orwell’s allegorical novel, but a hip cocktail bar located in a neoclassical building. At the bar, which sold local IPA, I got chatting to a DJ named Mark, and briefly wondered if I’d fallen through a wormhole into Hackney.

Mark offered to show me around, and we headed off to Ryumochnaya Ryadom, a lively bar with a low, vaulted brick ceiling. The walls were covered with Soviet memorabilia and old black and white photos, and drinkers turned to say hello as we walked up to the bar.

“This place is sort of a tribute,” said Mark. “The name comes from the Russian word for ‘shot glass’ and during the Soviet Union, a Ryumochnaya was the closest thing to a pub. You’d sit at the bar and eat some sausage and pickles, maybe some fish, and drink shots of vodka. That’s why the memorabilia is all Soviet, but they serve more than just vodka these days.”

He handed me a beer with my shot. As I turned from the bar, an excited young man with incongruous sunglasses and foppish blonde hair dashed up to me.

“Where are you from?” he asked.

“I knew it,” he said. “I’m from Epsom. Not originally, obviously. I was born here, but I live there most of the year, and I went to Eton. How do you like St Petersburg?”

“I like it,” I said, “I’d heard that the locals were unfriendly, but I’ve found it to be the opposite.”

“It’s a common misconception,” he said, “Russians don’t smile at strangers. If you do, they’ll think you’re a bit thick-in-the-head. So we seem cold. But once you get speaking to us, you’ll find we’re pretty friendly. Make sure you check out the history whilst you’re here. It means a lot to us.”

St Petersburg might be Imperial Russia’s cultural home, but it was also the site of World War Two’s most brutal battle, when it was known by the Sovietised name of Leningrad.

Between September 1941 and January 1944, 1.2m civilians, and some 300,000 soldiers, perished during the Siege of Leningrad. The numbers were mere abstractions until I visited Piskaryovskoye Memorial Cemetery, where most of them are buried.

“The siege is part of our identity,” my guide told me. “Everyone in the city has relatives who died during the siege, and every Victory Day this place is full of flowers.

“It was a time of great tragedy and suffering, but we are also proud of their determination. This city has a motto: Troy fell. Rome fell. Leningrad did not fall.” Beyond the palaces, beyond the history, I think that’s part of what makes it so special.”