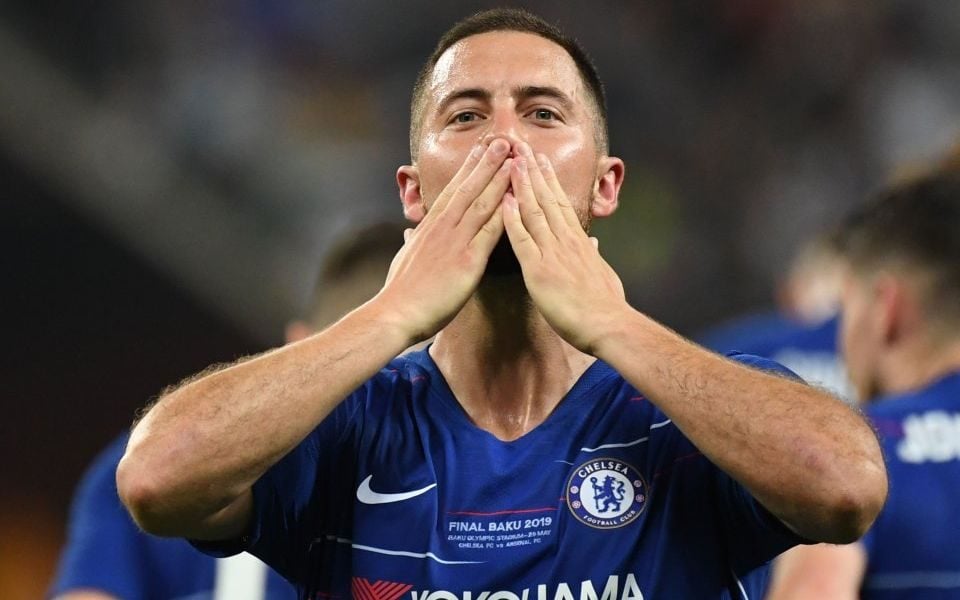 They don’t want him to go, but if this is goodbye it’s a sweet one from Eden Hazard.

He took his time, but when the chances came to shape the Europa League final it was Chelsea’s star who shone the brightest to light up a strangely subdued and distant – in more ways than one – atmosphere in Baku.

Arsenal, needing a win to secure Champions League qualification for next season, had the greater impetus on paper and began the better side. But as their momentum faded Chelsea grew into the tie and, crucially, had the clinical edge to make it count.

While former Arsenal striker Olivier Giroud had plenty to do with it – opening the scoring with a precise, trademarked diving header, winning the penalty for the third and supplying the fourth deliciously – it was Hazard’s night.

After setting up Pedro’s goal, burying a spot-kick and stroking home on the half-volley the Belgian was afforded a standing ovation by the small blue section of the Olympic Stadium. A bumper move to Real Madrid is mooted and after a sixth trophy in seven seasons of outstanding service Chelsea fans will surely be able to wish him well.

“I have made my decision already and now I’m waiting on both clubs,” Hazard told BT Sport after the final whistle. “I think it is a goodbye, but in football you never know. My dream was to play in the Premier League and I have done that for one of the biggest clubs so maybe now it is the time for a new challenge.”

The weakness of Arsenal’s defence was no secret coming into this all-English finale in Europe’s secondary competition. But while the Gunners’ celebrated 50-goal strike partnership malfunctioned in front of goal, spurning more than enough chances, Chelsea’s was unerringly accurate.

With Mateo Kovacic winning possession and driving from deep, Emerson overlapping on the left and Hazard comfortably out-performing his opposite number Mesut Ozil, Maurizio Sarri’s side turned the game on its head in 23 destructive second-half minutes.

Charging forward, Arsenal frequently lost possession in dangerous places, inviting Chelsea’s counter to spring forward. Give a player of Hazard’s quality such situations and he will punish you.

Former Chelsea goalkeeper Petr Cech stood no chance against the barrage. The 37-year-old made three quality stops and yet still conceded four, such was the capitulation. A fourth successive European final defeat for Arsenal and another season in Unai Emery’s favourite competition is their reward.

Given the rows, rumours and apparent turmoil behind the scenes at Chelsea this season, it was a perfect conclusion for Sarri; his methods have been vindicated in the form of a first trophy of a long career.

The manager may be perennially embattled, their star player may be leaving, a transfer ban may be incoming, but one constant remains at Chelsea: the ability to win silverware.