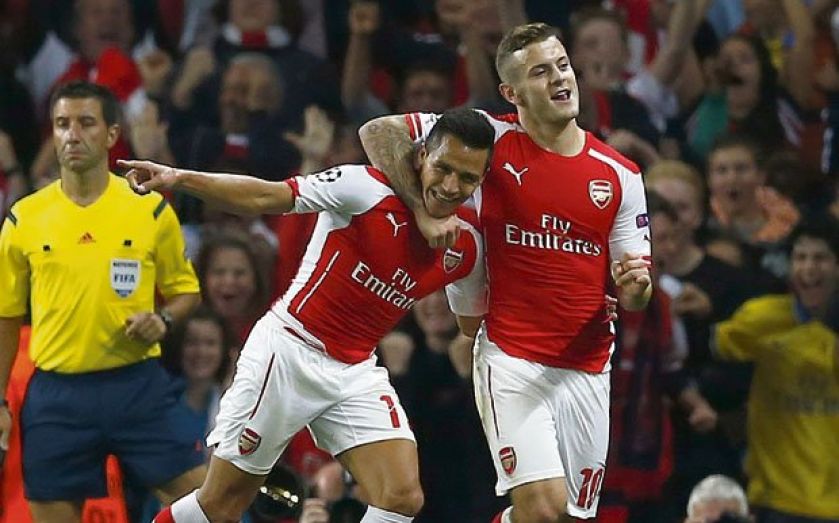 ARSENAL manager Arsene Wenger insists Alexis Sanchez is ready to shoulder the team’s goalscoring burden after the Chile forward paid off a huge chunk of his £35m transfer fee by securing a place in the Champions League group stage last night.

Sanchez struck in first-half injury time and the Gunners rode their luck against tireless Besiktas on a nervy night in north London, winning the tie by the slimmest margin and finishing with 10 men following full-back Mathieu Debuchy’s red card.

Wenger confirmed striker Olivier Giroud will be absent until late December at the earliest following surgery yesterday on a broken tibia, but played down talk of signing a replacement and backed Sanchez to blossom in Giroud’s central role.

“I bought him to play as a striker, not only on the flanks,” said Wenger, who denied interest in Manchester United’s Danny Welbeck and free agent Nikola Zigic and deemed Monaco’s Radamel Falcao, who scored against the Gunners during the pre-season Emirates Cup, too expensive.

“Giroud will be out for 3-4 months. You will ask me straight away who will we buy, and the answer at the moment is no-one. You cannot every time buy when a player is injured. We are open to any player if we feel they can strengthen the squad, but it has to be to buy not just to buy.”

A seventh playoff tie victory means Arsenal are likely to bank around £35m from the competition and take their place in today’s group stage draw for the 17th successive season, though that record looked fragile throughout 94 increasingly fraught minutes.

Wenger admitted his team had been lucky to see two Besiktas penalty claims dismissed, first after Debuchy slid in on Mustafa Pektemek and then when Jack Wilshere stumbled into Ramon Motta.

Wilshere was otherwise sharp and potent, bursting into the box and dragging a shot just wide early on and inadvertently teeing up Sanchez, who hijacked his one-two with Mesut Ozil, to drill past Tolga Zengin right-footed from 10 yards.

Sanchez was in sprightly World Cup form and should have scored twice more just after half-time, while former Newcastle United defender Debuchy and Alex Oxlade-Chamberlain also missed from close range as Arsenal spurned chances to finish the tie.

Debuchy’s second booking left the Gunners clinging on and former Chelsea striker Demba Ba wasted the visitors’ best chance when he miscued a free header at the far post in the dying moments.

What, where, when?
English clubs discover their Champions League group stage opponents today when the draw takes place in Monaco at 4:45pm British time.

How it works
The 32 teams are placed in four pots based on their own and their home country’s recent record in European club competitions. One team is then drawn from each pot for all of the eights groups, ensuring that four giants aren’t drawn together, and with the added condition that clubs from the same nation don’t go into the same group.

Red alert
Liverpool, returning to the Champions League after a four-year absence, look likely to face the toughest draw of the English teams, having been placed in pot three. That means they could be grouped with both holders Real Madrid and Italian champions Juventus or big-spending French title-holders Paris Saint-Germain.