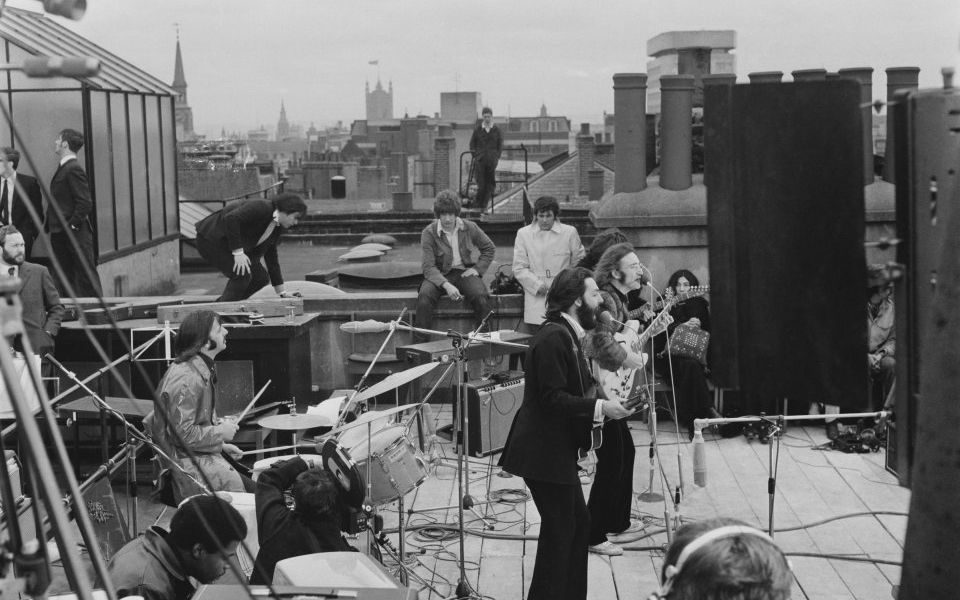 Exactly 50 years ago today the Beatles sang together for the final time. On the rooftop of the Apple offices at 3 Savile Row, they set up a surprise live concert that lasted 42 minutes before the police intervened.

After one last rendition of “Get Back”, the band called it a day, bowing out of the great decade of the sixties with as much flair as they had when they entered it.

On first glance, it would appear that not much has changed on Savile Row since the days of Beatlemania. Walking along the street, you can still peer down into the basement workshops where men in casual clothes sew and snip at suits that will sell for thousands of pounds.

On the ground floor, tailors with measuring tapes draped around their necks peer out the window waiting for new customers. Georgian buildings still line the long street, and at its southern end a Rolls Royce is parked on the side of the pavement.

Enduring clichés these may be, but they keep alive the independent style and rich traditions of Savile Row which tailors believe keep bringing customers back. It is not surprising that Japan, a nation largely obsessed with both branding and conservatism, is one of Savile Row’s biggest markets.

And yet Savile Row is now facing challenges it did not have to confront 50 years ago. Rents are spiralling, business rates climbing ever higher, and there are fears that centuries-old tailors could be pushed out by bigger brands and bigger wallets.

Few examples better reflect those concerns than the one inside the very Apple building on top of which the Beatles sang, where there now sits an Abercrombie & Fitch outlet with loud pop music and mass-produced children’s clothes.

“I still struggle to find the reasons for putting that brand here,” says William Skinner, managing director at one of the two surviving family-owned tailors on Savile Row. “It never seemed to fit in naturally, to stick a children’s clothes shop on a famous street where suits are made. They are chalk and cheese to what we do.”

Skinner, who is the boss of Dege & Skinner and a fifth-generation tailor himself, currently chairs the Savile Row Bespoke Association, a sort of trade body for the street’s most historic tailors. Outrage was sparked in 2012 by the proposals for a Savile Row Abercrombie & Fitch, which seemed to represent everything that its neighbouring tailors loathed and feared in equal measure: modernism, corporatism, Big Names.

But as the cost burden grows, it is likely that other global brands are waiting in the wings. “Our business rates have doubled over an 18-month period, and over the last two years our rents have gone up 66 per cent,” says Skinner.

According to the Local Data Company, independent outlets on Savile Row have dipped from 26 to 23 over the last seven years. On its nearby West End sister avenue of Jermyn Street, home to some of Britain’s most iconic shirt retailers, independent stores have fallen from 66 to 57 during the same period. Not monumental, but certainly not insignificant.

The troubles facing Savile Row’s older constituents was brought to light just two weeks ago, when Hardy Amies, a men's tailor founded by the former dressmaker to the Queen, revealed that it had gone into administration for the second time in a decade.

“It hurts me that we might have big bland brands of no independence in the West End," says Simon Cundey, managing director of Henry Poole & Co, another established maker of bespoke suits. “It becomes a destination of non-eventful companies. We don’t want to lose Savile Row like we did with Smithfield or Covent Garden or Fleet Street.”

Cundey added: “When Abercrombie came in, that was pathetic – it didn’t make sense for them or us. “But if you keep jacking up prices, firms like Topshop or H&M or Massimo Dutti will pay it no problem.

When the next business rate increase comes in, you might find some firms can’t afford to be here and close up.” Of course, costs and rivalries are not the only challenges facing Savile Row.

Brexit has meant a drop in the pound and a subsequent rise in foreign consumers, but the uncertainty that comes with it also worries the historic tailors. Wardrobe habits are changing too, with fewer bespoke suit sales but a rise in appetite for summer and winter jackets. Customers are also more demanding these days, with Savile Row tailors having to go out of the street more often to meet their busy City clients.

And yet, despite these shifts, Skinner and Cundey both remain positive about the resilience of the street’s tailor enterprises. Skinner says: “It has been tried before to push out the independents – firms coming in and sort of trading off the name of Savile Row, but it has not lasted very well.”

Trading does not seem to have slowed down, and despite Abercrombie’s presence and the impact of higher bills, Savile Row tailors seem to have adapted to modern life largely by not adapting at all: by staying true to their roots and embracing their own identity of tradition and quality.

In fact, you might say they are sending out to the big corporate brands the same refrain that the Beatles, in their last hurrah, sang out over the Savile Row rooftops half a century ago: Get Back.