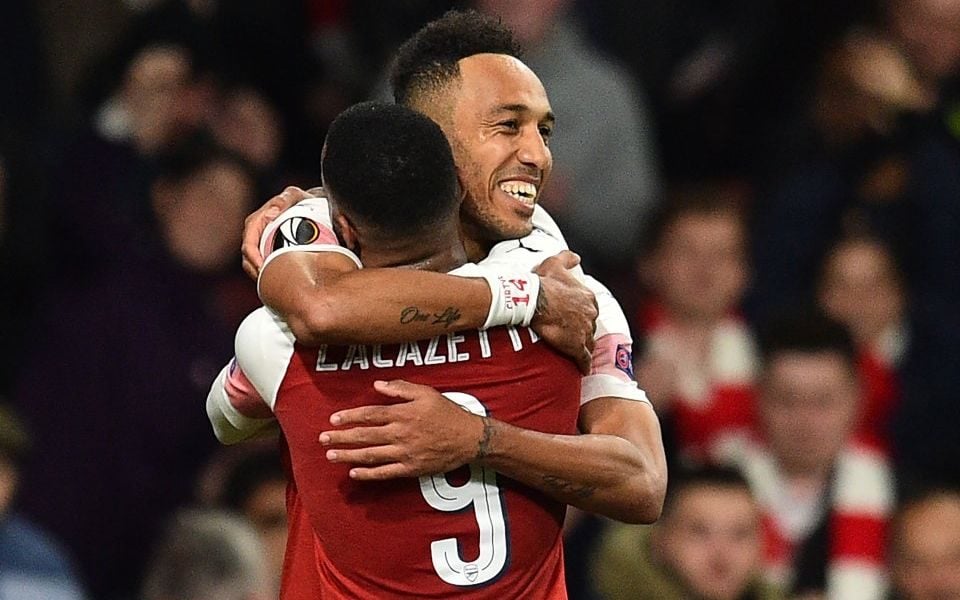 Arsenal are a team of contrasts.

They’re flawed but entertaining, in one breath exasperating, the next exhilarating, and all of those aspects were on show against Valencia in the first leg of their Europa League semi-final.

After shaking off an appalling start, eventually the Gunners’ attacking qualities won the day to turn an uncertain 2-1 into an advantageous 3-1.

Alexandre Lacazette scored twice, and yet he could – and perhaps should – have scored more. Thankfully for him his strike partner, Pierre-Emerick Aubameyang, popped up late on to ensure that Arsenal completed the turnaround on the pitch and changed the mood off it.

As a result they will go to the Mestalla on Thursday with belief, rather than hope, that they can reach the final in Baku on 29 May.

Coming into the game all the talk was of Arsenal’s ramshackle defending. After 15 minutes at the Emirates Stadium the hosts had done nothing to change that narrative as lax marking, poor positioning and sloppy decision-making allowed Valencia three good chances.

From the first two set pieces of the game the Gunners’ weakness was exposed, with Rodrigo running free to set up Ezequiel Garay two yards out, only for the centre-back to somehow clear the crossbar.

Three minutes later, it was 1-0 as Rodrigo lost Sokratis from a corner and headed back across goal for Mouctar Diakhaby to climb above Granit Xhaka and nod in.

Not content with that start, Ainsley Maitland-Niles botched an attempted pass-back with his head, granting Goncalo Guedes an opportunity. With the crowd stunned into near-silence, Arsenal tried their very best to make themselves hospitable to their visitors.

But while they tied themselves in knots defending, with their best attacking trio on the pitch the Gunners bared their teeth at the other end.

Lacazette, red-hot in front of goal and happy to be paired with his strike partner Aubameyang, buried two chances in seven minutes to turn the mood around.

First Aubameyang raced onto a through-ball before showing good composure to draw the goalkeeper and defence and tee up Lacazette for a tap-in to make it 1-1.

Xhaka then swung in a lovely left-footed cross and the French striker reacted faster than a dozing Facundo Roncaglia to beat Neto with a downward header.

After three consecutive Premier League defeats in which nine goals were conceded, the home supporters were sated, but not convinced.

With recent fall guy Shkodran Mustafi and the occasionally error-prone Sokratis alongside him, the importance of captain Laurent Koscielny was amplified.

In one of the biggest games of their season Arsenal had a lead to defend. The problem was Koscielny was limping sporadically in between phases of play.

Laurent Koscielny battled an Achilles problem to get through (Source: Getty)

The 33-year-old had surgery on his Achilles after an injury at this stage last year and as a result suffers with tendonitis. To see him struggling was an obvious worry.

Despite his grimaces Koscielny soldiered on, making a vital headed clearance to stop Guedes getting on the end of the irrepressible Rodrigo’s cross and organising a defence which very much needs a commanding voice. He held on until the 82nd minute when Nacho Monreal relieved him and Arsenal fans will hope the damage is not too great.

Arsenal were vastly improved in the second half, but as the minutes ticked on the feeling they needed another goal grew stronger.

When Lacazette conspired to miss two chances after Xhaka’s mishit shot reached him via Aubameyang’s flick it looked like they might have to settle for two goals, the Frenchman striking it into Neto’s legs before his follow-up was blocked.

Sead Kolasinac charged down the left time and again, but after several occasions in which his cross was inaccurate or unlucky he struck gold, picking out Aubameyang at the back post to rubber stamp the win with a volley.

Aubameyang was outstanding all night and the goal – his 34th in just 59 appearances for Arsenal – was a fitting end to a performance bursting with pace, endeavour and final third quality.