Unai Emery elected to select a similarly attacking line-up to the one that beat Manchester United last weekend and it paid dividends. The Gunners needed goals after losing the first leg 3-1 and the team duly obliged, with two in the opening 15 minutes from Pierre-Emerick Aubameyang and Ainsley Maitland-Niles as they went on to win 3-0.

Emery has become accustomed to tinkering his team but in this must-win match he went for the 3-4-1-2 formation that served him so well against United, spearheading the attack with Aubameyang, Alexandre Lacazette and Mesut Ozil. The trio have started 12 games together so far this season, winning eight and drawing four.

It could be a sign that Emery, who is fond of changing players and tactics from game to game, is settling on a formula he likes.

Aubameyang’s opening goal in the fifth minute sent Arsenal on their way to a sixth consecutive win at the Emirates Stadium and their ninth in 10 games.

He scored a second to seal Arsenal’s place in the Europa League last eight as he tapped in from Sead Kolasinac’s cross before celebrating by putting on a mask. It was the 15th time the Arsenal striker has been directly involved in a goal in his last 13 appearances at home, with 11 goals and four assists.

Emery spent a lot of the build-up to the clash encouraging the fans to create an atmosphere for his players as he tries to turn the Emirates into a fortress.

While the Gunners have struggled on occasion away from home, their record at the Emirates this season has been outstanding; they have only lost three games at home, winning 18 out of a possible 24.

VAR is being used throughout the entirety of the Champions League knockout stages but will not be implemented until the final in the Europa League as its slow roll-out continues.

How the match officials could have used it tonight, though, in a game that saw an almost unprecedented number of fouls, with 14 committed by both sides.

It would have also allowed the officials to check Arsenal’s second goal in which Aubameyang, who crossed to the back post for Maitland-Niles to head home, was offside, as well as a challenge from Lacazette for which he was awarded a yellow despite calls for him to see red. 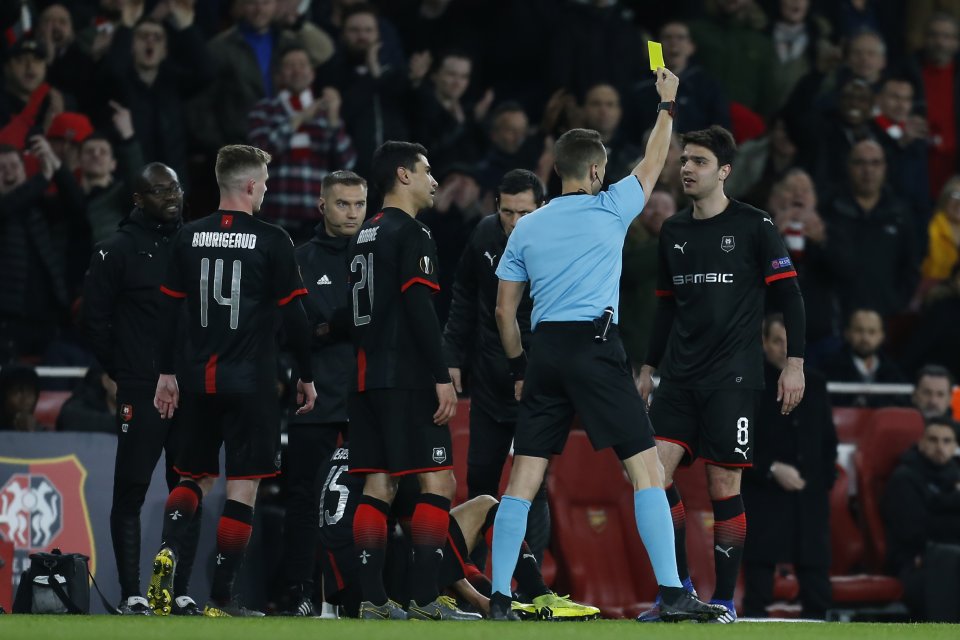 There were eight of yellow cards shown at the Emirates (Source: Getty)

Rennes got it wrong

Rennes manager, Julien Stephan, said his side would need to score a goal or two to go through and by half-time he was right.

The French side have been rejuvenated since Stephan took over in December but their attacking intent from the off backfired as Arsenal continually threatened in the opening stages.

Rennes had their chances and were particularly threatening at the start of the second-half, but in hindsight should perhaps have tried to focus on keeping the hosts out, particularly during the opening 20 minutes in which they were caught on the counter-attack and quickly went down 2-0.

Since the long-term injury to Hector Bellerin, the question of who to play at right-back is one that may have been keeping Emery up at night. But in the last couple of matches Maitland-Niles has established himself as the go to man, helping Arsenal to consecutive clean sheets.

His form has been patchy throughout the season, but with a run in the side he has shown why Arsene Wenger entrusted him to play at left-back at times last season.

The formation is certainly playing into the 21-year-old’s hands and his and Kolasinac’s ability in the wing-back role is perhaps another reason why Emery is keen on playing with three centre-backs.

While Maitland-Niles scored a decisive second goal, Kolasinac helped keep Arsenal ahead on aggregate with a last-ditch tackle before supplying the assist for the third and final goal.