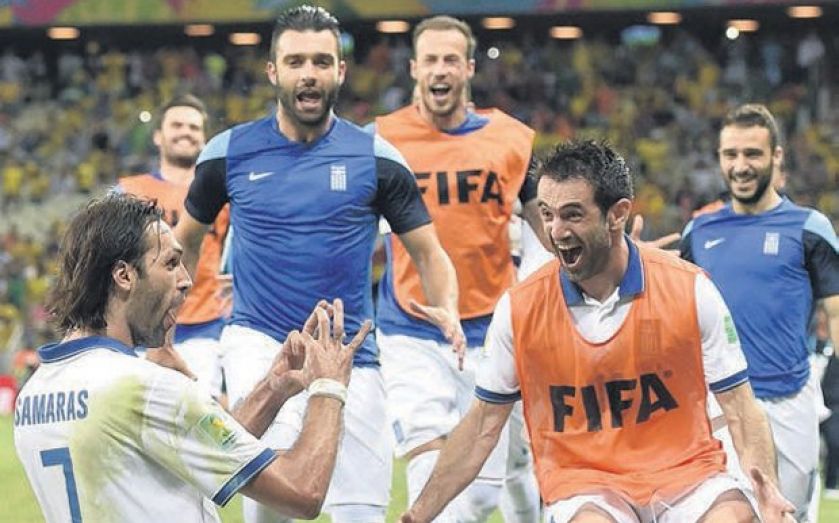 GREECE 2 IVORY COAST 1FORMER Celtic striker Georgios Samaras passed the ultimate test of nerve last night as he slotted in a 93rd-minute penalty to send Greece through to the last 16 of the World Cup in Brazil.After Swansea striker Wilfried Bony had cancelled out Andreas Samaris’s first-half opener, it appeared Ivory Coast were on their way to the knockout phase alongside Group C winners Colombia.But as the clock ticked into added on time, Samaras, a free agent having left Scottish Premiership champions Celtic this summer, was tripped as he prepared to shoot by Giovanni Sio. And, after a brief stoppage added to the tension, Samaras dusted himself down to fire in the vital winner and set up a meeting with Group D winners Costa Rica.Greece had failed to score in their opening two matches and suffered a disastrous first quarter to the game when midfielder Panagiotis Kone and goalkeeper Orestis Karnezis were both forced off due to injury.Yet the 2004 European champions took the lead three minutes before half-time when Samaris latched onto a loose pass from Newcastle’s Cheick Tiote, stormed forwards and drove past goalkeeper Boubacar Barry.The Elephants, promised double their regular win bonus by the country’s president should they progress, levelled on 74 minutes when Bony blasted in former Arsenal winger Gervinho’s square pass.But Samaras took centre stage in the dying seconds to transform a Greek tragedy into a moment to savour.