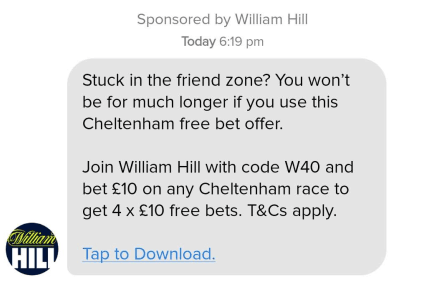 A William Hill advert that appeared on dating app Tinder has been banned by the advertising watchdog over concerns it linked gambling to sexual prowess.

The advert, which appeared as a message in the app, offered users the chance to escape the “friend zone” by signing up to William Hill and placing a bet on the Cheltenham horse races.

“We considered that the text suggested that those who gambled would be more likely to develop a friendship into a sexual relationship and therefore linked gambling with sexual success,” the ASA wrote in its ruling.

William Hill defended the advert, saying it was supposed to relate to the nature of the business the firm was advertising on, and said there was no intention to link gambling to sexual success.

But on reflection the bookmaker acknowledged it could be interpreted differently and removed the message.

The ASA ruled the ad must not appear again and warned William Hill to ensure it did not link gambling to sexual success.