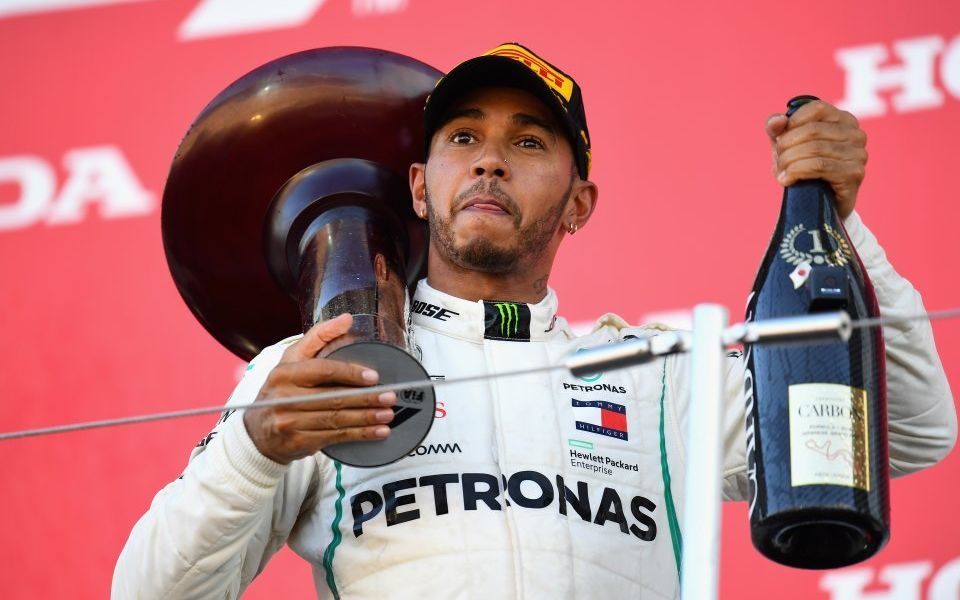 Lewis Hamilton’s first Formula One world title, in 2008, was sealed in the most dramatic of circumstances.

Needing to finish fifth or higher to become the youngest ever champion, the 23-year-old looked to have fallen foul of the Brazilian weather.

Showers at Interlagos meant a tactical battle and a lottery between wet and dry tyres. Having started fourth on the grid, Hamilton had slipped to seventh following pit difficulties.

His title rival and hometown hero Felipe Massa of Ferrari was in first place and in control. As Massa took the chequered flag the Ferrari garage burst into celebration; their man had played his part to win from pole and, barring any late changes, would be taking the championship.

Hamilton had other ideas. With his wet tyres giving him an advantage over those who had gambled and stayed on dry, the young Brit passed Toyota’s Timo Glock on the last corner of the last lap to finish in the all-important fifth place.

Ten years and 66 career wins on from his unforgettable first victorious season, Hamilton stands on the brink of a fifth world title. But while he’ll be hard pushed to make it even half as box office as his first, the events in Austin, Texas, this weekend will mean just as much to Hamilton.

The Mercedes driver can wrap up the championship, and draw level with Juan Manuel Fangio on five titles, with three races to spare if he out-scores rival Sebastian Vettel by eight points at the US Grand Prix.

Having accrued a 67-point advantage over Ferrari’s main man by winning six of the last seven – including the last four in succession – you would have to be brave to bet against Hamilton taking another.

If you’re still not convinced of Hamilton’s pending ascension to the Formula One throne consider this: of the six grands prix held in Texas, he has won five.

Lewis Hamilton has an excellent record at Austin, where he can secure the title this weekend (Source: Getty)

As the man himself put it last week: “Austin is usually a good track for us, so I can’t wait to unleash this beast there.”

The moods in the two competing camps of Mercedes and Ferrari could hardly be more contrasted.

While Hamilton’s ninth win of the season in Japan left him one step away from glory, Vettel was disappointed right from the get-go, with ninth place on the grid followed by a collision with Max Verstappen and a sixth-place finish.

The race was indicative of a second-half-of-the-season drop-off from Vettel, which looks very likely to leave him without silverware for a fifth straight year, and see Ferrari extend their barren run without a drivers’ championship since Kimi Raikkonen’s sole triumph in 2007.

While Vettel’s frustrations are growing – with himself and his team – Hamilton seems at ease with both. He has always been deeply ambitious, but it seems his personal drive has now been matched by more of a team ethic.

Sebastian Vettel has been a frustrated figure for much of the second half of the Formula One season (Source: Getty)

“I think we’ve got a great approach,” he said after winning in Singapore last month. “As a team we have often outperformed a car that has been slightly better and we have also outperformed Ferrari as a team.

“I definitely feel driving-wise, on the track, my knowledge and my approach to the balance that I have in my life in general is very good.”

Never one to shy away from the limelight, Hamilton appeared on US television show Good Morning America on Tuesday. But rather than blow his own trumpet, he deflected praise.

“There’s 1,800 people in my team to build two cars,” he said. “I’m just a chink in the chain. I’m just the guy who gets to go out and unleash the potential.”

The feeling is very much mutual in the Mercedes camp. “[He is] showing commanding performance in the car and challenging the entire team to perform to higher levels at the same time,” said team principal Toto Wolff earlier this week.

Lewis Hamilton is already a Formula One great; can he continue on to catch Michael Schumacher's record? (Source: Getty)

“Lewis has shown what a class act he is. Both on and off the track he is more complete than ever before, showing commanding performance in the car and challenging the entire team to perform to higher levels at the same time.”

Once Hamilton draws level with 1950s icon Fangio – be it this weekend, or in Mexico a week later – there will only be one name above his on the list of Formula One’s most successful drivers of all time.

With all well in his life on and off the track, and having out-performed what some observers believe to be a superior car this season, could Hamilton continue to dominate in the coming years and threaten Michael Schumacher’s record of seven titles? Formula One’s managing director Ross Brawn thinks he can.

“I never thought I would be able to say it, but Hamilton really is the one who could beat Michael Schumacher’s records,” he told Italian newspaper La Gazzetta dello Sport last week. “He’s got everything under control. The quality that unite him with Michael and the great guys is that he knows how to win races that he should lose.”