It is the semi-final that no one saw coming. Two teams with limited financial resources who were supposed to struggle to make it out of their Champions League group.

Instead, Tottenham and Ajax have claimed some of Europe's biggest scalps on their path to a final-four clash that will see two of the competition's surprise packages go head to head.

Underdog stories in the Champions League are few and far between, but with two of them set to intertwine tomorrow, they have more in common than just their new knack for achieving the unthinkable.

Read more: Llorente and VAR the unlikely heroes on historic night for Spurs

Ajax, who are making their first semi-final appearance since 1997, will visit the new Tottenham Hotspur Stadium having already claimed historic wins at the Bernabeu and Allianz Stadium against Real Madrid and Juventus respectively.

The four-time European Cup winners drew away to Bayern Munich in the group stages as well, and having made their mark on some of Europe's most iconic stadiums, will be looking to do the same at the continent's newest.

Spurs were similarly discounted from making it this far, especially after being drawn against Premier League champions Manchester City in the quarter-finals, despite a strong performance against Borussia Dortmund in the round before. 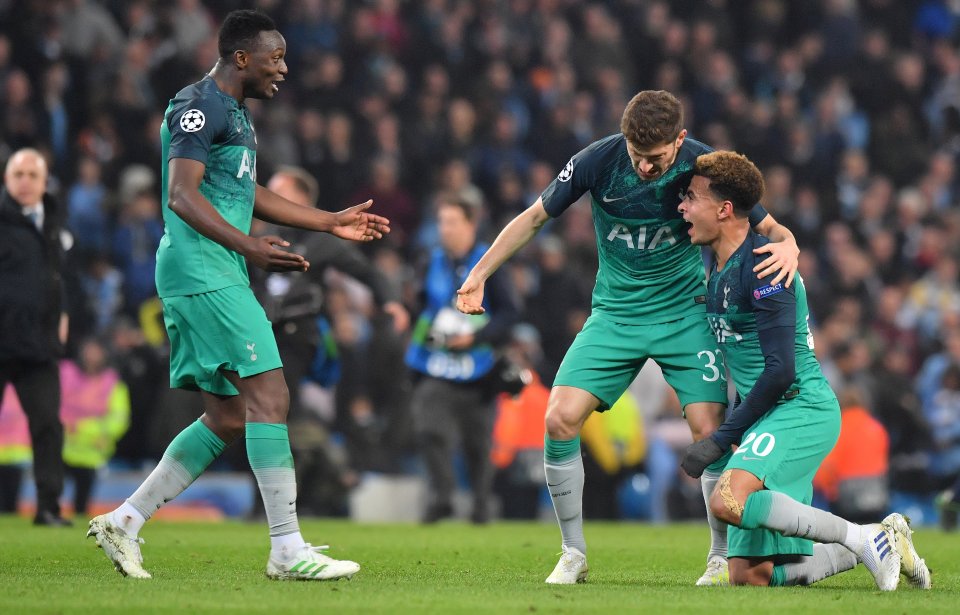 Tottenham beat Manchester City on away goals in a dramatic match (Source: Getty)

It is just the second time Tottenham have reached the semi-finals – they did so on their European Cup debut in 1962 – but they almost didn't reach the knockout stages after losing to Barcelona and Inter Milan and drawing with PSV in their opening three group games. A vital point at Camp Nou on matchday six secured their place in the round of 16 and signified a statement of intent.

The similarities between the two don't end there, though.

Typically there is a correlation between a club's wealth and success, most clearly demonstrated by Real Madrid, whose £665m revenue for the 2017-18 season saw them top Deloitte's Football Money League just as they claimed their third successive Champions League title.

The latest figures place Tottenham 10th with a revenue of £379m. That is a sharp £70m increase on the year before, largely due to using Wembley Stadium as a temporary home and an improvement in Champions League performance, although a considerable amount of their new stadium's cost is in the form of debt.

Of the 16 teams that reached this year's knockout stages, Tottenham were the eighth wealthiest, while Ajax had by far the lowest income with just £81m in revenue, meaning they did not even make Deloitte's top 30. 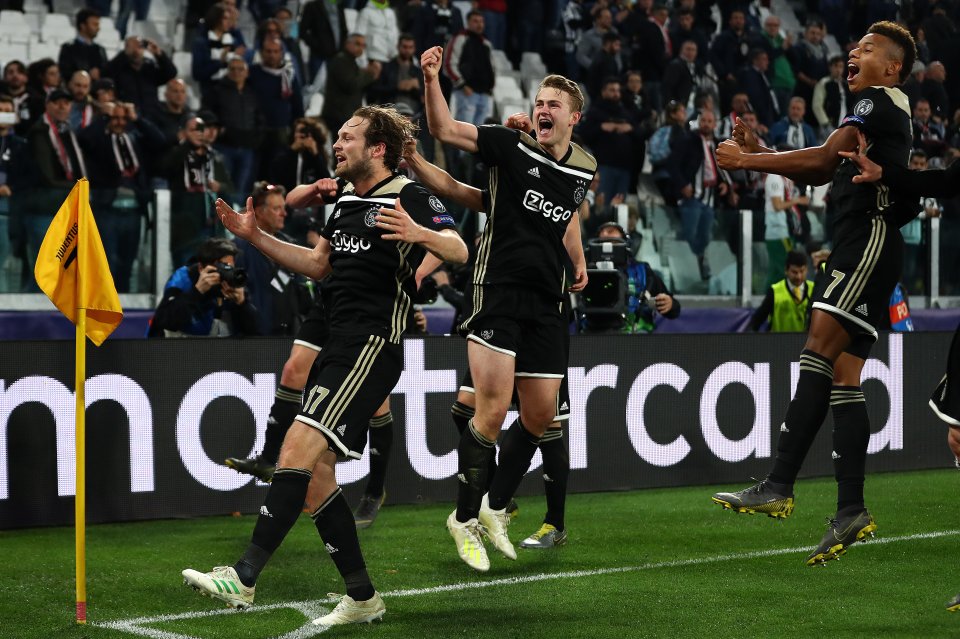 Ajax celebrate an historic win away to Juventus as they reach the Champions League semi-finals (Source: Getty)

They are unable to rely on the same significant broadcast distribution as those in Europe's top five leagues and so depend upon their ability to develop talented players and the funds from selling them for success in Uefa competitions.

Mauricio Pochettino did not sign any players in either of the last two transfer windows as Spurs contended with the cost of their new stadium, yet they have also managed to be competitive on all fronts.

They made a £5m profit on transfers this season with the sale of Moussa Dembele in January and had a net spend of just £16m for the season before, which saw the sale of Kyle Walker for almost £50m as well as Kevin Wimmer and Nabil Bentaleb for around £17m each.

Ajax's outlay on players is also minimal compared with Europe's elite, with a net spend of around £30m over the past 12 months and a profit of £48m and £41m over the two previous seasons.

They acquired former Premier League players Daley Blind and Dusan Tadic last summer to add experience to a side filled with young talent, although one of their prodigies, Frenkie De Jong, has already been sold to Barcelona for next season in a £68m deal. 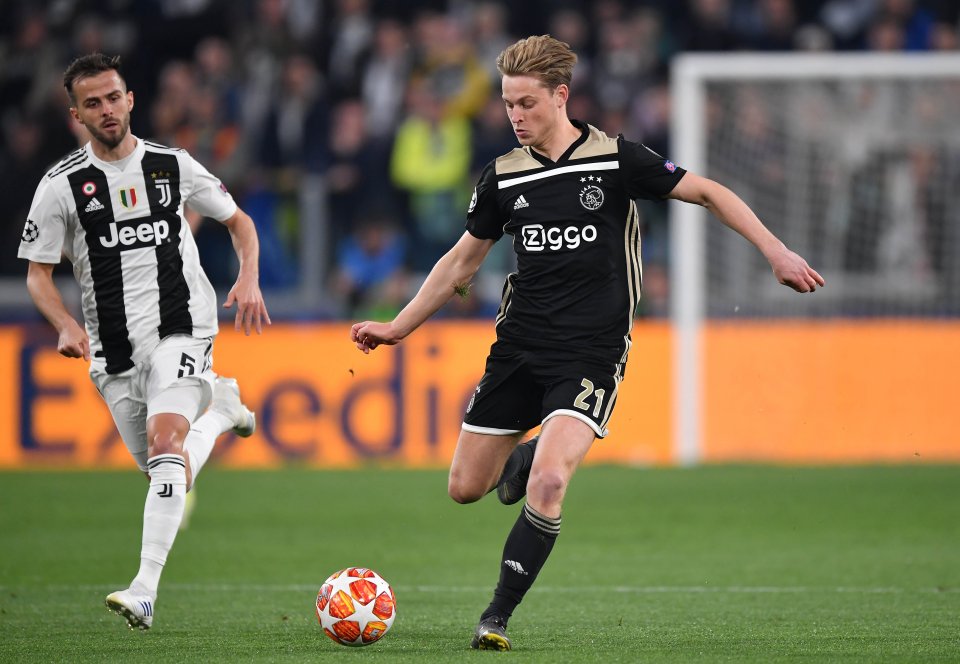 Frenkie de Jong, 21, has already been signed by Barcelona for next season in a £68m deal (Source: Getty)

The Eredivisie leaders are no strangers to selling their best players and will line up against a handful of them when they face Tottenham tomorrow, including Davinson Sanchez, who was sold to Spurs for £36m in 2017.

Tottenham also bought Christian Eriksen and Jan Vertonghen from the Dutch side, while another former Ajax man, Toby Alderweireld, arrived via Atletico Madrid.

Ajax are renowned for cultivating talent and under director of football Marc Overmars and manager Erik Ten Hag – set to sign a new, long-term deal – they have this season created a winning formula of gifted youngsters breaking through and experienced heads to guide them.

Ten Hag worked alongside Pep Guardiola at Bayern Munich and, like Pochettino, has shown pedigree when it comes to helping teams overachieve on a limited budget.

As the likes of Manchester City and Paris Saint-Germain continue to invest vast amounts of money in search of a maiden Champions League title, the approach from Ajax and Spurs has served as a reminder of what money cannot buy: work ethic, unity and, most significantly, a guarantee of winning.

Both sides have contributed to this season's best games and a dramatic Champions League campaign, but only one of their stories can continue to Madrid.