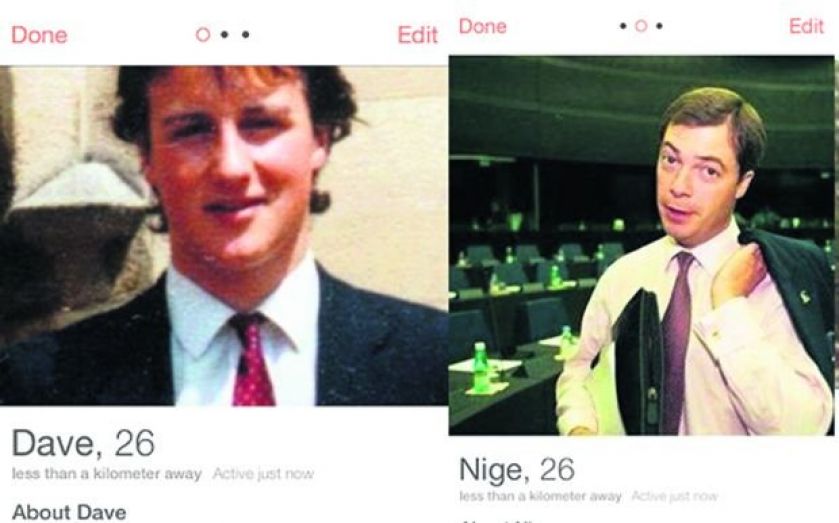 With now less than 100 days until the General Election, all eyes will be on the polls – but which survey should you trust?
Well, if you’re not a political animal – and would rather base your vote on shared food choices and notches on the bedpost than actual policy decisions – Betfair may have the answer for you. Teaming up with matchmaking app Tinder, the online bookmaker created four mock profiles of party leaders “Dave”, “Ed”, “Nick” and “Nige”, complete with profiles from their university days.
In the course of five days, bookies “swiped right” to show their appreciation for each man 100 times a day, to make sure the poll was proportionate.

Judging by these results, David Cameron and the Bullingdon Club credentials described in his profile are on a path to victory. While Cameron, whose bio reads that he “prefers watching TV rather than being on it”, secured 257 matches; his coalition partner Nick Clegg, who is “currently in a difficult relationship on the verge of break up” won 172 matches. Ed Miliband, a “lover of bacon sandwiches”, scored an impressive 223 matches while Ukip’s “Nige” Farage could only rack up 112, possibly because he “doesn’t like European food”.
Though Betfair described Tinder users as “an audience of potentially disengaged, tech-savvy voters”, some clearly wanted to delve deeper than the leaders’ youthful appearances. While one of “Dave’s” matches asked: “Have you got a long term economic plan for how hardworking our relationship will be?”, a potential Farage partner quipped: “I’m not a local though – will that be a problem?”.
Share
Tags: General Election 2015 Paddy Power Betfair Tinder