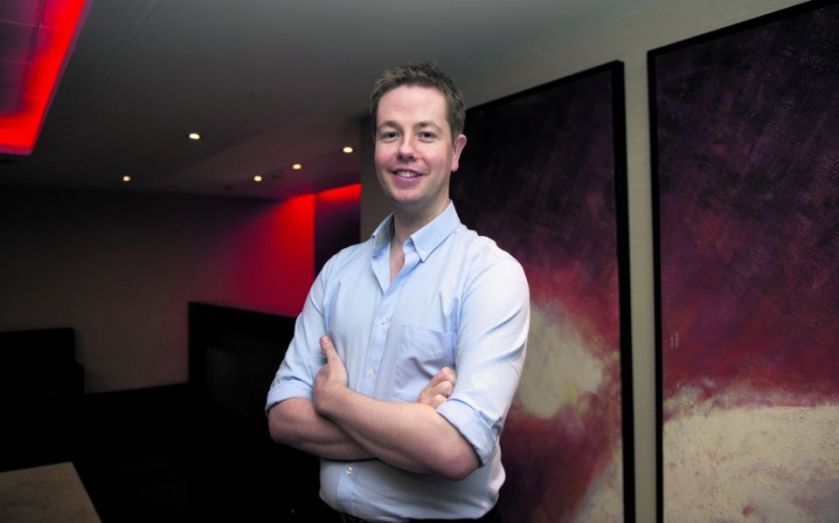 While we’re talking, it suddenly dawns on Mark Pearson that it’s his company’s eighth birthday. “It’s definitely around now,” he laughs, raising his empty plastic water cup in the air.  In June of this year, Pearson sold My Voucher Codes, as part of his parent company Markco Media, to global mobile money technology provider Monitise, in deal worth up to £55m. With a 90 per cent stake in the business, his personal wealth is now estimated at more than £60m.
But Pearson’s life isn’t one long enviable tale; he’s really worked for it. With the backdrop of a domestically violent, single-parent childhood, by 16 he’d embarked on a career as a chef. The school careers adviser had narrowed it down to that or a fireman, and chef seemed more apt, “because it felt closer to having something you own”. By 19, he’d won a national catering competition, and landed himself a job at Claridge’s. “I had offers from restaurants in France and California, but I went for London because I wasn’t brave enough to go abroad – I’d never been out of Liverpool.” Three years later, he was running three gastropubs in south London.
But the young entrepreneur knew he could go bigger. In 2005, he was sitting in his flat in south London, on a mission to find the right business.“I didn’t really know what I was going to do, but I knew it needed to be scalable. I also knew it had to be online. I’d grown up seeing the dot-com boom. I remember seeing this 15 year-old on ITV who’d literally become a millionaire overnight – I was in awe.” Pearson hadn’t even done IT at school but, as seems to be the way with him, once he’d decided he was going to do it, he just did. “There are even forum posts of me saying, ‘has anyone got a business idea for me?’” he says. After a couple of months, and inspired by his florist mum, he settled on Roses by Design, printing a message on a rose and sending it to the customer. “Bit of a Marmite-styley product,” he admits. “But I wonder how many marriages I was responsible for?”

Pearson did everything from orders to online marketing. “I thought PR looked quite easy, so I sent out my own press release.” And he got a response – from ITV’s This Morning. And just days before Valentine’s Day, one of his roses ended up spending a morning on the sofa with Phillip Schofield and Fern Britton. “Web traffic went through the roof. It was ballistic. I took thousands of orders and had to rope friends and family to help.” Freezing cold (they kept windows and doors open to preserve the flowers) and with bleeding fingers, Pearson’s motley team got every last order out. “You’ve got to do what you’ve got to do,” says Pearson simply. But the scalability issue was bothering the self-starter. “Mother’s Day was just around the corner, which reminded me that it was a seasonal business, and one which really needed investment.”

Pearson is a great believer in fate, putting much of his success down to the “paths and opportunities” that present themselves in life. But listening to him, you can’t help but feel it’d be unfair to hand all the credit to Lady Luck.
Just after Mother’s Day, Inter Flora and Flowers Direct – two industry heavyweights – got in touch. “They asked if they could put discount code banners on my website – it turned out I’d become number one on Google. I said I’d charge them £500, but they told me they’d prefer to use commission – I didn’t even know how that worked.” But he soon did, and found himself making more money promoting other businesses than he was from his own product. “That really got me thinking,” he says.
He looked at coupon sites in the US and how much traffic they got – “it was overwhelming, but no-one else seemed to be doing it in the UK.” He spent £300 getting the website built and chose a name. “I always say to young entrepreneurs, ‘just get a test product out there. You don’t even know whether it works – there’s no point going for perfection.’”
This strategy did work for Pearson. Feeling his way around affiliate marketing, which enables you to make money by referring people to purchase items online, he scoured the internet for deals. Within six weeks, My Voucher Codes had 10,000 people coming through its emailed offers. “People talk about things going viral – this did,” he says. The first year saw revenues of £300,000. The next, it was £1m, and four years in, £10m.
Today, over 60,000 businesses worldwide use My Voucher Codes to connect customers to their offers, and it counts Amazon, M&S, John Lewis, Tesco, Sky and Walmart as part of its clientele.

THE FUTURE IS MOBILE

But staying still isn’t something Pearson does very well. Competitors grew in number, and he knew the landscape was changing. Key rival Voucher Codes was bought by Google-backed Whale Shark in 2011, and Retail Me Not got $300m in venture capital backing. “I’d never taken VC money, but I was watching over my shoulder. I thought, ‘what’s my strategy?’. I knew the future was in mobile.” With 50 to 60 per cent of My Voucher Code’s traffic from mobile, and a desire to release the value of the firm, Pearson decided to sell to a buyer in the right space. “Monetising mobile is more challenging. It’s been slower adoption, but we’re now seeing it catch up.” Monitise put forward the idea of an acquisition just before Christmas last year.

Now, Pearson divides his time between running My Voucher Codes and his own projects. He’s already invested personally in nine startups, three-quarters of which, he says, are doing well. Having housed several young entrepreneurial tech whizzes in his offices along the way, he’s keen to do more.
Although already impossibly productive, Pearson explains that 2015 is going to be the year for him. “I’m going to invest in more young businesses and put them all in one office. That’s how you foster innovation – it’s an ecosystem where they can share ideas and solve problems together.” This matters to Pearson – his one regret is that he wasn’t able to get going sooner. That said, he does know, albeit quietly, how fortunate he is. “Growing up, I’d felt a real pressure to provide. One of the things I’m proudest of was being able to buy my mum a house. I look at where I’ve got now, and I think, ‘yeah, I’m okay – I’ve done alright’.”