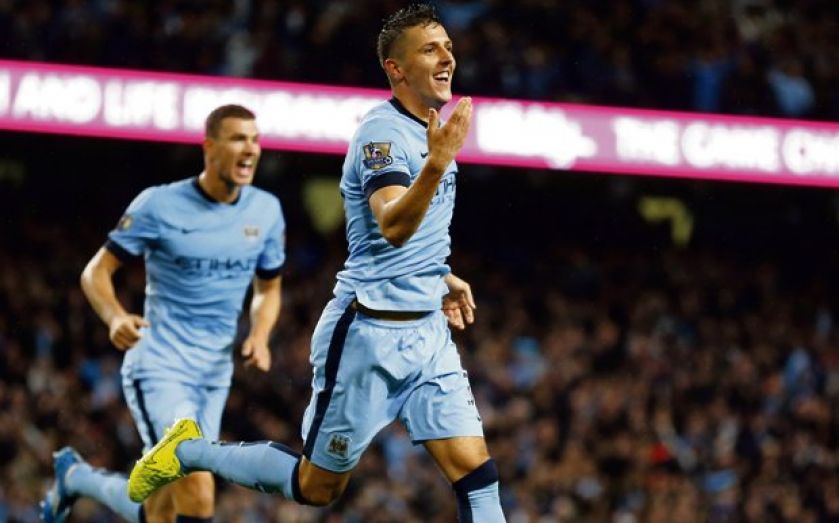 LIVERPOOL boss Brendan Rodgers admits the signing of Mario Balotelli represents a gamble after Manchester City delivered a statment of intent and issued an early hammer blow to their title rivals thanks to a double from Montenegro hitman Stevan Jovetic at the Etihad Stadium last night.

The former Fiorentina frontman punished the visitors with a goal in each half to set City on their way as substitute Sergio Aguero made an instant impact before a late Pablo Zabaleta own goal briefly threatened a Liverpool revival.

And while Rodgers insists the £16m capture of Balotelli – who watched on from the stands at his old stomping ground – may come with a price, he believes the foundations laid in the Liverpool camp could prove a tonic to the Italian’s famous histrionics.

“There is no doubt there is a risk with it but it’s a calculated risk,” he said. “He knows he has responsibility, not only to himself but this great club.

“But I’ve been able to assess what we’ve got as a team and the type of characters we have and it’s because of that which allows me to bring him in. I’m hoping that he’ll embrace our environment and culture and benefit from it.”

Liverpool threatened shortly after the half-hour mark as Daniel Sturridge’s shot from a tight angle was beaten away by keeper Joe Hart after the England striker demonstrated quick feet to evade City skipper Vincent Kompany and create space.

City opened the scoring in the 41st minute as Jovetic stole in ahead of debutant Alberto Moreno to slam the ball through Simon Mignolet after Samir Nasri’s cross from the right flank was only half-cleared by Croatia defender Dejan Lovren.

The hosts doubled their advantage 10 minutes after the re-start as Jovetic rounded off a move he started by finishing left-footed from Nasri’s pull-back despite the efforts of Liverpool full-back Glen Johnson on the line.

Aguero wrapped up the points in the 69th minute, 23 seconds after replacing Bosnian forward Edin Dzeko, when he latched onto Jesus Navas’ pass to fire past Mignolet.

Liverpool pulled a goal back inside the final 10 minutes as Hart kept out Rickie Lambert’s powerful close-range header only for the ball to cross the line after rebounding off Zabaleta.

Lambert had the opportunity to reduce the arrears further only seconds later but chose to cross which allowed Kompany to clear.