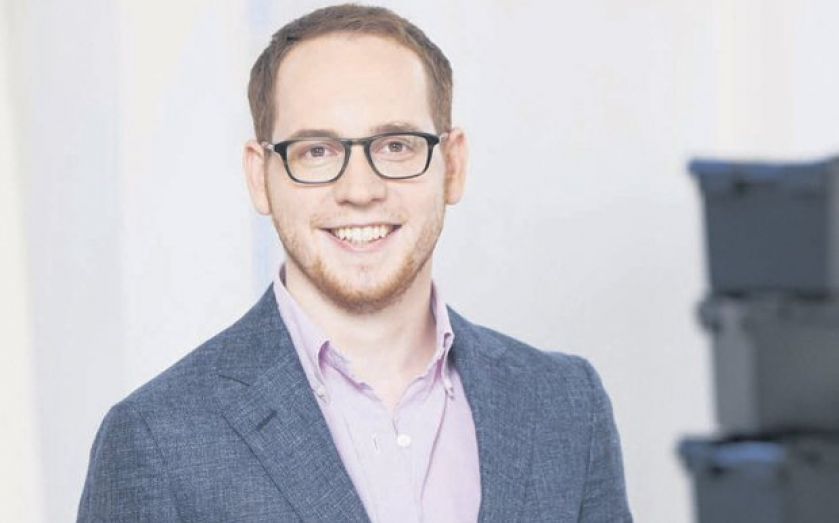 Budding entrepreneurs will frequently tell you that it’s heartfelt passion driving them to set up a business. But the substance of many highly-successful companies isn’t all that exciting – think chipmakers, paper shredders, kebab boxes.
“It’s not that I always dreamt of owning a storage business. Nobody does that. It’s not sexy to go to warehouses. It’s that we had the passion to do something ourselves,” David Fuchs, co-founder of SpaceWays tells me.
Less than five months ago, he and two friends, fellow Germans Martin Twellmeyer and Rob Rebholz, launched their storage company. They wanted a business with strong fundamentals, where they could solve a problem and think big. “Passion is a great thing. But what you’re doing needs to make sense financially.” Fuchs recognises that storage is never going to change the world, but doing it well will make people’s lives better.
The three university pals are working hard to update traditional business models. With SpaceWays, clients don’t have to sign a rental contract, or start with a large minimum size. The firm drops standardised boxes off to your home – you can order them direct online – and then picks them up on demand. And you can start with just one box. The pricing structure is simple too: £6 per box per month, and a £19 flat fee for return of all your things. The recurring revenue – customers stick with the business – is great, says Fuchs. But more importantly, “we’re solving a problem for people”. And competition doesn’t worry him, either: “It tells you that the model can work.”
ITCHY FEET
Fuchs’s banking background – he worked in FX sales at JP Morgan from 2008 to 2013 – means he knows what it’s like to struggle with the London space squeeze. It was the same story for Twellmeyer and Rebholz. But a stronger bond between the trio was their desire to build something new. Using his holiday time, Fuchs did his first trial work period with Rocket Internet, the international e-commerce venture capitalist firm and startup incubator, in 2009. It’d be four years before he actually took the plunge and left banking. “Each year I asked myself whether it was time to go.” To get some experience, he moved to Mexico last year, and spent a year working for Rocket’s e-commerce firm Dafiti.
The Rocket team have, over the years, become good friends to the SpaceWays founders, and the firm is backed by the incubator. Months of meeting between three places – LA, Frankfurt and Mexico – saw them planning what they wanted to achieve in a business. “It was a very systematic approach. The end of the process was this May, when we decided we wanted to do the storage thing, and do it in London.” They sat down with Rocket on the Friday, and by Monday, they were working on it.
GROWING PAINS
With the business still in its infancy, Fuchs is cagey about the number of customers the firm has, or exactly where it’s expanding to. But pleased with the progress it’s made in London and Paris, the firm is expanding to at least two more international cities within weeks. And Fuchs claims revenue in London will hit £1m in the next year.
But things haven’t been all moonlight and roses – SpaceWays has had its fair share of early hiccups. A communication cock-up, for example, saw one member of the team having to take an emergency taxi trip to a stranded customer, with the original van driver sitting pretty at the wrong address. And Londoners haven’t thus far proved to be the easiest of customers: “Obviously, we’re working on increasing what we can take, because there’s demand for really bulky items… several people have asked us to take their car.”
DRIVING QUALITY
Undeterred, the threesome are set on bringing the processes and professional rigour of their former employers (including giant banks and a private equity house). “Corporate environments give you guidance and structure. In a startup, you have to be very sure of what you do. We can’t afford to have churn when we’re expanding this quickly – we need to trust that people can work independently.” And the management team is shaping up to be impressive. One recruit chose SpaceWays over a role at Credit Suisse, another Boston Consulting Group. “The draw is the same as for us. More responsibility, and you can actually make decisions.”
So is Fuchs in it for the long haul? “I hope so. We want to change how people store things.” If anything, he tells me, he waited too long to get going: “Your mid-to-late-20s are a great window of opportunity. You can try things, fail – nobody cares, and you will have always learnt something.”
CV
Company name: SpaceWays
Turnover: £1m (projected within a year)
Founded: May 2014
Number of staff: 25
Job title: Co-founder and managing director
Age: 30
Born: Dusseldorf
Lives: Berlin
Studied: Business administration and management at WHU
Drinking: During the week, sparkling water, ice and lime. At the weekend, Mezcal Los Danzantes
Eating: Sushi, steak and tacos
Favourite business book: The Lean Startup, by Eric Ries
Talents: Sleeping well on any given long-haul flight
Heroes: Anyone courageous enough to challenge the status quo
Motto: “Just do it.”
Most likely to say: “Why not?”
Least likely to say: “I’d like to have the grilled eggplant salad.” Eggplant is pretty much the only thing I do not like to eat.