Mullins: a man on a mission 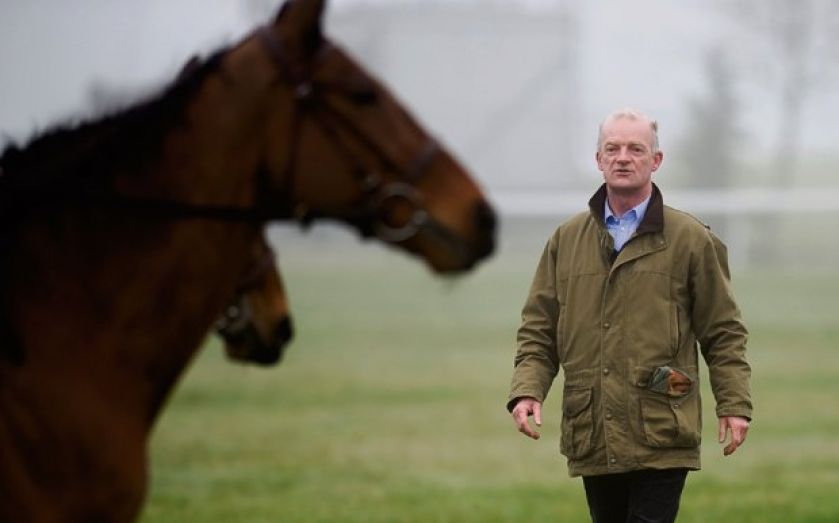 LAST year’s visit to Ballydoyle remains one of the highlights of my journalistic career, but yesterday’s return to the Emerald Isle may just have shaded it when it comes to my racing bucket list.

Since a young age I’ve wanted to visit the corner of County Carlow that Willie Mullins calls home – and a press trip to his yard has finally scratched that itch.

Neither I nor my fellow travellers were expecting much in the way of tips from the famously cagey trainer, whose 29 successes at the Cheltenham Festival remain the highest in Ireland.

However, to view the embarrassment of equine riches Ireland’s champion trainer will be taking to Prestbury Park in less than three weeks’ time was a real treat few racing fans will ever get to experience.

A couple of my press colleagues even got to take a spin on his horses yesterday morning after emerging bleary-eyed from our lodgings, but, after casting a more sober eye over my larger frame, he suggested there was a “brand new tractor” for me to sit on.

Yet nothing could detract from the pleasure of running the rule over his string of superstars. Mullins, it transpires however, gets less of a kick out of these things and has come to dread the annual pilgrimage to Gloucestershire.

But, with five winners last year and four in 2011, the pressure of retaining his pre-eminence is one few of us can empathise with either.

In a rare moment of soul-searching, he admitted: “Cheltenham is not an enjoyable meeting for me as there is too much going on.

“I don’t feel pressure from owners, I simply feel it from my own expectations. The fear of failure is huge, particularly if one or two big guns don’t fire.”

Perhaps due to this weight of expectation, Mullins, a six-time champion amateur jockey during his younger days, will not be resting on his laurels when he sends out his battalion of stars next month.

He added: “I keep saying to my son Patrick about the quality we have – this is not normal and neither of us will be taking it for granted.”

Mullins is assembling a squad of immense talent for the Festival and here are my top 10 to keep an eye on, along with his thoughts.

Vautour
Sky Bet Supreme Novices’ Hurdle (Tuesday 11th March, 1.30pm)
“He looks like a big chaser in the making, but will take his chance in the first race of the meeting. He jumped superbly when making the running to win the Deloitte Novice Hurdle last time and it’s his jumping that stands him out from the rest.”

Champagne Fever
Racing Post Arkle Chase (Tuesday 11th March, 2.05pm)
“We’re now leaning towards the Racing Post Arkle on the opening day and we’re hoping he’ll bounce back from a disappointing run at Leopardstown over Christmas. He’s put under-par performances behind him in the past and seems to save his best for Cheltenham, where he’s won a Champion Bumper and a Supreme. We’d be confident he’ll turn up on his “A” game and he’s a much better jumper than he showed last time.”

Hurricane Fly
Stan James Champion Hurdle (Tuesday 11th March, 3.20pm)
“I’ve been saying all along that I genuinely think he could be better than ever this season and I stand by that. He simply looked so good when he came in after the summer and has done nothing wrong. He’s an extraordinary horse and he still managed to win last time even though I’d been easy on him in the build up to the race. I thought he was beaten turning in and his desire saw him through. I’m not worried at all about a potential lack of pace in the race and I hope he can win.”

Quevega
OLBG Mares Hurdle (Tuesday 11th March, 4.00pm)
“She’s on course for an unprecedented sixth consecutive victory in the race and seems back on track after having a few days off recently when she was a little stiff. At this stage that’s definitely not a worry as she is still well ahead of schedule and in great shape.”

Faugheen
Neptune Investment Management Novices’ Hurdle (Wednesday 12th March, 1.30pm)
“I’d say I’m leaning towards this race at this stage as he can be a little fresh and the three miles of the Albert Bartlett may stretch him. If I’m honest, I haven’t been that happy with him of late and have just been talking about him with Ruby. That said, we changed his feed last night and he ate up well. He seems in good spirits this morning.”

Ballycasey
RSA Steeple Chase (Wednesday 12th March, 2.05pm)
“We think he’s a real three-mile chaser and, after he won the Dr P J Moriarty last time, the RSA Chase seems the most obvious choice for him. He’s also entered in the National Hunt Chase and Patrick’s desperate for me to run him in that so he can ride him!”

Arvika Ligeonniere
BetVictor Queen Mother Champion Steeple Chase (Wednesday 12th March, 3.20pm)
“He has won three of his four starts so far this season and looks set to take his chance in the Champion Chase. We’ve got something special planned from a tactics point of view and I’m certainly not going to tell you anymore.”

Felix Yonger
JLT Novices’ Chase (Thursday 13th March, 1.30pm)
“He was beaten last time but hated the ground. I think the step up in trip and hopefully some better ground is just what he needs. He’s run well at the Festival before having chased home Simonsig in the Neptune a couple of years ago.”

Briar Hill
Albert Bartlett Novices’ Hurdle (Friday 14th March, 2.40pm)
“I’ve given him plenty of time and he is one of the ones we really need to put some work into. But he never really shows anything at home and certainly surprises us on the racecourse. He was an impressive winner of the Champion Bumper last year so we know he likes the track.”

Annie Power
Target not yet finalised
“At the moment we are just readying her for the Festival and a final decision on which race she will line-up in won’t be made until very late. So much can happen between now and then that we don’t need to be rushed into making a decision. In weighing up where she goes, we have to look at her potential opposition. If she went to the Champion Hurdle she would potentially have to face Hurricane Fly. If she went down the Mares’ Hurdle route she’d have to meet an incredible mare like Quevega. All the options are very much still open.”