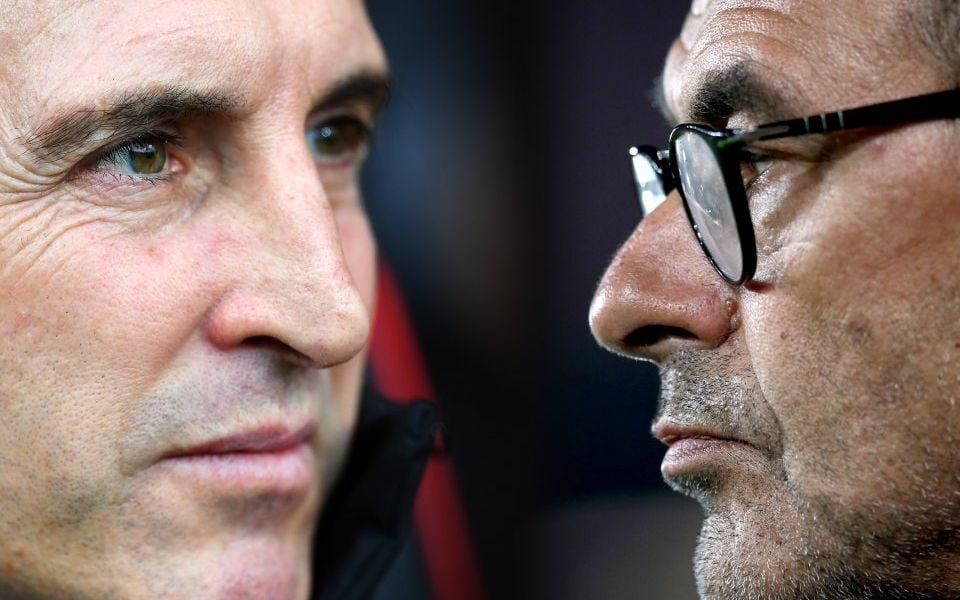 When Unai Emery and Maurizio Sarri pitched up in London a year ago they did so with something to prove.

For the Spaniard, it was that his failure to deliver the clean sweep of honours that Paris Saint-Germain’s hierarchy craved owed more to the unique ecosystem of France’s richest club than his own shortcomings as a manager

For the Italian, it was that he could export the singular philosophy that won him influential admirers at Napoli and recreate Sarriball with another club.

Twelve months on from their arrival during that endless, sweltering summer, it is fair to say that both men have felt the heat.

Emery and Sarri will meet on Wednesday night in just about the most far-flung London derby possible, having navigated Arsenal and Chelsea through the Europa League’s labyrinthine format to its equally ill-conceived conclusion in Baku.

Neither man can claim their journey to this point has been an unqualified success and, as another close season approaches, the jury remains out on both of their long-term prospects.

Emery has at the very least halted the decline that Arsenal slipped into during the later years of Arsene Wenger’s reign.

Finishing fifth in the Premier League is one place better than last term, while their total of 70 points is seven up on their 2017-18 haul.

He has also addressed some long-standing frailties, notably their defending of set-pieces, and made them more competitive in matches against their rivals in the upper reaches of the table, doubling their points against Big Six sides with wins over Tottenham, Manchester United and Chelsea.

On top of that, he could yet cap the campaign with a trophy and qualification to the Champions League.

Emery has halted Arsenal's decline and could yet end his first season on a high (Source: Getty)

On the other hand, that Champions League spot was within Emery’s grasp with just two league games to go and Arsenal blew it.

They are barely any closer to challenging Manchester City or Liverpool, who took almost 30 points more, their away form is still a major concern, and for all the improvements at set-plays, the defence remains an unpredictable, clunky mess.

For a coach who was said to have wowed his prospective employers with a detailed dossier on this group of players he took an age to settle on a favoured XI.

Even having finally done so, Arsenal remain a team without a well-defined style, prone to stodgy play and too reliant on elite strikers Alexandre Lacazette and Pierre-Emerick Aubameyang.

The former Sevilla manager might argue that he has been hampered by a very patchy squad that became stretched to breaking point when a series of injuries hit.

On the lack of a discernible style, Emery told Spanish media this week that he wants Arsenal to be “a chameleon team”, wedded neither to a possession game nor counter-attacking but able to use either.

In the same interview he pointed out that he “did not promise titles” but “to compete”. By that measure at least, he has met his targets.

Sarri, too, has engineered an improvement of sorts, accruing 72 points – two more than Antonio Conte did in the previous season and enough to see that Chelsea finished third and returned to the Champions League.

He has guided them to not one but two finals, having only lost the Carabao Cup to the omnipotent City on penalties, and, for all that this has proven a turbulent, uncomfortable year for the club on several levels, Sarri could yet end it on a high note.

His team are fancied by the betting markets to claim the silverware by overcoming Arsenal in Azerbaijan.

Sarri has steered Chelsea back into the Champions League and to two cup finals (Source: Getty)

For all that, the 60-year-old has failed in his task of implementing Sarriball at Stamford Bridge.

Far from winning admirers with their bewitching interplay, Chelsea have at times alienated their own fans with pedestrian performances.

Two players that the club recruited to aid Sarri’s project, Jorginho and Gonzalo Higuain, have been deeply underwhelming on an individual level and largely ineffective in making the collective effort resemble anything like Sarri’s Napoli vintage.

Yes, third place and two cup finals looks good on paper, but it is unclear to what degree Chelsea have achieved that because of their manager or despite him.

Sarri’s major mitigation is that he did not start work until mid-July, just a month before the season started, as the club wrangled with Napoli over his release and their own severance terms with predecessor Conte.

That left him scant time to acclimatise, especially since he was expected to indoctrinate the squad with an intricate new system.

He has been quick to pin the blame on his players’ unwillingness to take instruction, a claim given some weight when goalkeeper Kepa Arrizabalaga refused to be substituted in the Carabao Cup final.

Ultimately, Sarri can argue that he has delivered improvement, albeit without his feted style.

Who needs it more?

While both Arsenal and Chelsea would relish success in the Europa League this week, the stakes are higher for one team than the other.

Unless Arsenal win in Baku, their absence from the Champions League will extend to a third year, stripping another layer of sheen from their standing in the game.

More than that, it would dent their income considerably – English teams earned more than €90m each from this year’s Champions League while even winning the Europa League will only bank Arsenal or Chelsea around €40m – and therefore affect recruitment and their hopes of catching their rivals.

That is simply not the case for Chelsea, who have already guaranteed a place in next season’s top club competition and all the concomitant benefits.

As a significant honour, winning the Europa League would also likely mean more to Arsenal than Chelsea.

The Gunners have not lifted a European trophy since Alan Smith’s volley sank a celebrated Parma side in Copenhagen 25 years ago, bagging the now-defunct Cup Winners’ Cup.

Chelsea, meanwhile, have won both the Europa League and Champions League within the last eight years alone.

Arsenal and Chelsea are set to meet in a far-flung London derby (Source: Getty)

The stakes are different for the managers, too. While Sarri’s position does not appear as irretrievable as it once did, the expectation remains that he will depart this summer, with Juventus said to be keen on offering him a return to Italy.

If he leaves a trophy as a parting gift – and two fingers to those within the club he has clashed with – then so much the better. But it feels too late to win back some supporters and whether he wins the Europa League or not will probably matter little in their and the club’s final judgement.

For Emery, the situation is more delicately balanced. Managing director Vinai Venkatesham said last week that Arsenal are “delighted” with the Basque’s performance already but, however their season concludes on Wednesday, this has been a mixed campaign and without Champions League qualification will represent more a stemming of the bleeding rather than an outright healing.

And though Arsenal are slight underdogs there is pressure on Emery, whose career has largely been built on three wins in this competition with Sevilla.

Fail here and his credibility will suffer a knock and – unlike Sarri – that is acutely important for a coach who must continue winning people over next season.

Momentum with England at Nations League