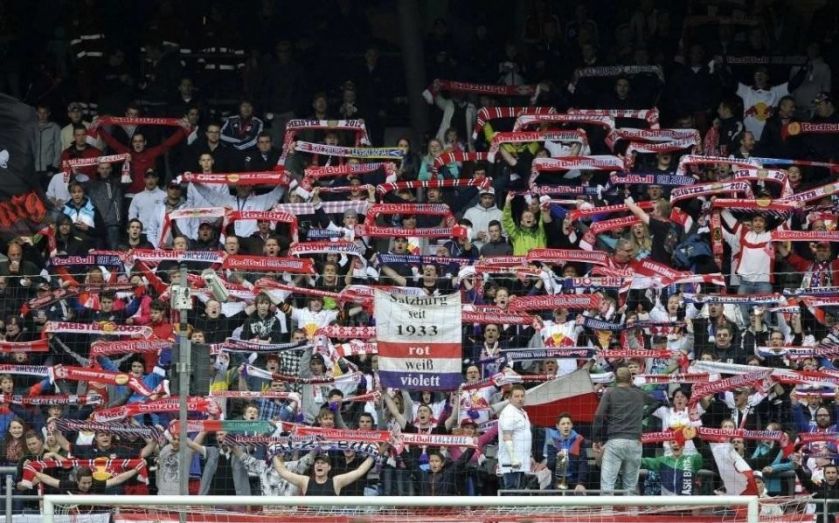 Could Leeds United one day have Red Bull affixed to their name?

Rumours that the renowned energy drink brand is interested in a takeover of English football’s beleaguered giants have circulated since 2013, even in spite of Red Bull’s repeated denials the suggestion still seems to have wings.
Earlier this week Dylan Thwaites, chief executive of fan ownership group “Leeds Fans LLP”, revealed Red Bull had even contacted the group about a potential purchase of the club.
“The only party we’ve talked to that wasn’t prepared to offer fan ownership was Red Bull,” Thwaites told BBC Radio Leeds.
“For Leeds fans to support their position they needed to have a legally binding position where they wouldn’t be changing the name of the club, the kit colour, the stadium naming rights, and they were unprepared to give any legal assurances for that”, he explained.
Leeds fans protective of their club’s identity have cause to be concerned about Red Bull sniffing around. In the last decade the energy drink brand has moved into football, building up a nursery of clubs around the world which all adopt the $7.5bn (£5.12bn) brand’s name, logo and colours.
[infographic id="23"]
Red Bull’s first foray into football was with SV Austria Salzburg in 2005, one of Austria’s biggest teams, who at the time were under-performing in the league and struggling with their finances.
Immediately, the company made its presence felt, declaring “this is a new club with no history”, changing the team’s colour from violet to red and white and slapping a brand new badge on the shirt.
Some incensed fans even broke away to form their own club in the lower leagues, while those who stuck around have enjoyed unprecedented success since. Red Bull Salzburg have won five Austrian Bundesliga titles since the takeover (they’d won three previously) and look on course to nab another this season.
Alex Januschewsky, from Red Bull Salzburg fan group Raging Bulls, explained to City A.M. what it's like following a fizzy drink’s football team, and shed some light on what Leeds fans could expect, should any takeover come to pass.
What was your impression of the Red Bull takeover when it first happened? The rebranding seemed to be very aggressively implemented.

Well, the "takeover" was a "rescue", to tell the truth. SV Austria Salzburg had no money and no opportunities. It was quite hard to see our colour – violet – vanish, but not so hard to see the emblem change. We were used to this with other sponsors such as "Casino" and " Wuestenrot".
There were several issues in the past with Red Bull, but they were new to this sport at the beginning, but those mistakes happened 10 years ago.

What's changed since? How do Red Bull compare to previous owners?

The club is much more professional now, the communication with the fans is superb. The "takeover" was the best solution for the club.
They learned from their mistakes in the beginning. In 2005, there was a lot about marketing – now the focus is 95 per cent on the football and the game itself. They act much more professionally than previous owners.

Are the owners successful in the transfer market and generous with funds?

Red Bull Salzburg try to get talents from our own academies or other clubs if it's the right choice for the squad at the time. Salzburg needs talents, not stars. The Austrian league is pretty weak compared to the German, Spanish, Italian or English leagues.
We can develop players such as Sadio Mane (now at Southampton), but cannot keep them for years. They [Red Bull] try to buy young talents or develop them in their own academies, and if they are "too good" for the league they will be sold.

Why did some fans choose to set up a breakaway club? Do you understand their reasons for doing so?

I've been a fan of Austria Salzburg since 1974. Without the financial investment of Red Bull the club would have vanished from Austria's top league. When Red Bull came, all the fans' concerns were about the club's colours and tradition they lost.
This was bullsh*t. Football is an industry – in Austria and in England. Players play for money and their time in this "job" is limited.
The new "Austria Salzburg" has no tradition, it's a new club with a logo from the 1950s and will have severe problems with money in higher leagues. I don't understand why they formed a new club…the start of Red Bull in the soccer business was not ideal. But this was 10 years ago. Nowadays everything is fine and the communication with the club and the players is better than before.

What would you say to Leeds fans concerned about a potential Red Bull takeover?

If they do, the fans will see offensive football, they will get better players and soon Leeds will be in the Premier League – again. You don't have to fear Red Bull. They are doing a very professional job these days.