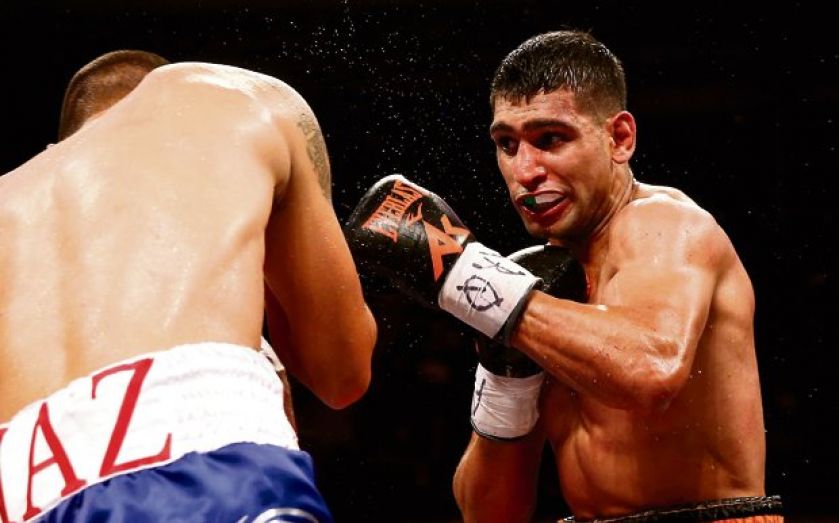 FORMER world champion Amir Khan is adamant his sought-after meeting with Floyd Mayweather will come to fruition after being added to the undercard of the American’s forthcoming fight with Marcos Maidana in Las Vegas.

Khan previously held titles at light-welterweight level, but will make the step up to welterweight for the first time on 3 May to take on Luis Collazo.

Though he remains frustrated at being overlooked for the main event slot, Khan still believes a contest with Mayweather is inevitable.

“The fight with Mayweather will happen in the future,” he said.

“I’ll probably be at ringside for Mayweather’s fight against Maidana and will call him out again in the press conference, so we’ll have to see what happens.

“I think he wants the fight and there’s a lot of public demand for it. There’s not a lot of fights out there for him, so if he wants to have another three fights in his career I have to be one of them.”

Collazo, 32, lost his world welterweight title to England’s Ricky Hatton in 2006, but goes into the fight having won 35 of his 40 career bouts, including his last four.

Khan has fought just once since December 2012, beating Julio Diaz on points in Sheffield last April, though expects to be in top condition on his return to the ring.

“I’ve been working non-stop, having some great sparring sessions that will hopefully keep off the ring-rust,” he added. “I’ve had a long break, but I’ve been in the gym and working on mistakes I’ve made, getting strong and taking time to relax and not think about the boxing side of it.

“He’s going to come at me with everything. We are going to be ready.”