Earlier this autumn Mayor of London, Sadiq Khan, caused a storm by announcing plans to put restrictions on wood-burning stoves, forbidding the burning of solid fuel in certain zones.

If they go ahead, it’s not only the authenticity of a stone-baked pizza from your favourite pizzeria that would be extinguished – the aromas and hypnotic cosiness of a real fire in your sitting room would be a thing of the past, too.

With 2025 slated as the year of the ban, it gives us plenty of time to consider the alternatives. Some interior designers, such as the prolific Kelly Hoppen, have already embraced the joys of a working fireplace, electric or gas, as a design feature. Hoppen has just launched an elegant range with the specialist Chesneys that makes a feature of being smoke-free.

She is the latest in a roster of design names, such as Barbara “Biba” Hulanicki, Tim Gosling and Jane Churchill, to partner with Chesneys, and Kelly Hoppen for Chesneys is the company’s biggest collection with an independent designer, coinciding with the opening of its 3,500sqft flagship store in Belsize Park.

"Gas will always trump wood when it comes to fireplace efficiency,” he says. “Gas burns more cleanly and produces 99 per cent fewer emissions.”

From opulent to understated, Hoppen’s collection comprises eight fire surrounds (from £1,395), five sets of decorative fire dogs, a fire basket and a bronze fire urn, all made using natural stone, such as limestone, and metals, such as polished brass and nickel. “I wanted to reignite the love of the fireplace and its accessories to make it the focus of the room, in as much as it could stand alone as a table does in a hall, and be seen as a work of art,” Hoppen says. 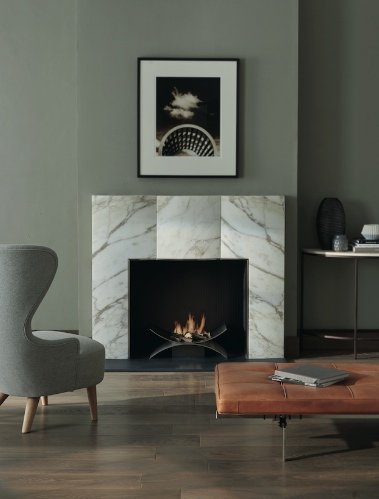 The Bradley, Kelly Hoppen for Chesneys

If you find that electric fires look a bit fake (there’s no real flame flickering around the faux logs), gas might be your go-to fuel (no logs to clean up, and a remote control for the heat and flame). And if you think that solid-fuel emissions in London deserve a dousing, then Modus Fireplaces' design director Daniel Sanders has some stats to back you up. "Gas will always trump wood when it comes to fireplace efficiency,” he says. “Gas burns more cleanly and produces 99 per cent fewer emissions.”

His clients are conscious of the environment, but many are also wedded to the aesthetic of a real wood fire. “Our designers have combined the two – efficient gas fires that appear to burn with wood,” he says.

And you needn’t worry about the installation as the Modus’ operandi is bespoke – if you have a contemporary apartment with floor-to-ceiling glass that you want to give some much needed winter cosiness, a slick modern flickering fire can be retro-fitted (from £7,800 installed). To get a feel for how a glamorous Modus fire could look in your home, check out its installations in the Berkeley hotel lobby, Perception bar at the W, and the cigar terrace of the Wellesley.

And new to the UK this autumn is Canadian firm Paloform’s handcast concrete fireplaces (from £2,700) and surrounding tiles (from £375sqm). Inspired by the work of Finnish designers, such as Eero Saarinen and Alvar Alto, Paloform specialises in a simple streamlined aesthetic that lets the materials speak for themselves. They’re hot stuff.