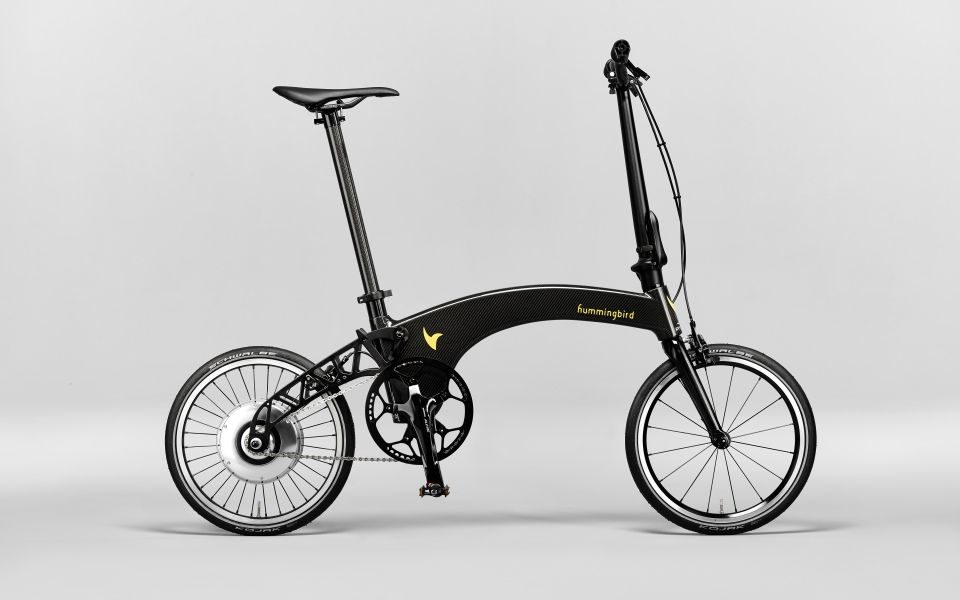 It’s only a slight exaggeration to say that the very first electric bikes were as big as houses, cost hundreds of thousands of pounds and needed to be recharged every 300ft.

But since their advent, the underlying technology has been continually refined and improved. Electric bikes have become smaller and lighter. Batteries have become more compact, assuming form factors that allow them to slip neatly and discreetly into the frame, so that nobody need know your dirty little electric secret.

Now we approach the beautiful zenith of the form, as foldable, practical electric bikes enter the mainstream. Hummingbird made waves when it created the world’s lightest folding bike in the world at just 6.9kg, and now the electric-motor assisted version comfortably claims the title of the world’s lightest electric folding bike at 10.3kg, which is still lighter than some non-electric Bromptons. But don’t just take my word for it. Take the word of the random cloakroom attendant at the National Theatre, who handed it back to me and said, unprompted, “goodness, that’s a light bike.”

To make a bike this light Hummingbird partnered with automotive engineers Prodrive, who hand build each carbon fibre bike in the same precision workshops used by Aston Martin, Renault and Subaru’s racing teams. The integrated 250W motor and battery weighs in at 3.4kg and resides in the rear wheel hub, delivering the highest energy-to-weight ratio of any electric bike on the market.

It really is no exaggeration to call this the Formula 1 of electric bikes. The Hummingbird is engineered to within an inch of its little life. It’s like riding a carbon fibre feather. Strap your lights to it and you’ll worry you’ve thrown it out of balance.

As with all electric bikes, the motor will only assist you up to a maximum speed of 25km/h. If you want to go any faster than that – and I promise you won’t – you’ll need to put some physical effort in. That top speed feels incredibly sprightly, and sometimes jittery, on these tiny wheels, and the weight of the bike allows it to accelerate more quickly than the full-size electric bike I ride to work every day. Just watch out for motorists, who don’t expect a foldie to bolt out of junctions like a slapped deer. The Hummingbird is not as comfortable a commute, lacking such luxuries as suspension, but it’s easily quicker. Over just five miles it knocked three or four minutes off my journey to work.

The bike folds in three parts, the handlebars collapsing where they meet the frame, the rear wheel tucking itself underneath, and the saddle retracting. It’s not as compact as the basic Hummingbird when folded, but it’s still comfortably carried up staircases and onto trains, and the frame is easily gripped with just one hand. With a bit of practice it can be folded or unfolded in a matter of seconds. Do it quickly enough and you might get a polite round of applause from nearby onlookers.

There are as few extras included on the bike as possible, all ruthlessly sacrificed in pursuit of that all-important accolade of lightest ever e-bike. For such a premium ride you might expect such extravagances as integrated front and rear lights – now standard on most decent electric bikes – but instead you’re expected to bring your own illuminations. You don’t get a battery charge indicator on the bike either, instead there’s an accompanying app called Bitride, which is used to check battery levels, adjust the degree of assistance and lock the rear wheel, as if you’d let a £4,495 bike out of your sight long enough to need it.

The electric Hummingbird’s singular goal is to strip away all unnecessary weight – even the handlebar grips are made of a cheap-feeling, ultra-light foam rather than rubber – and in doing so it becomes nothing short of a masterpiece of bicycle engineering. Whether it’s right for your own commute depends on your personal preferences and disposable income. For me, a larger bike with a bigger battery, slightly longer range and a suspension capable of dealing with crumbling London roads is the more convenient option. But if you’re on a well-paved cycle path, and live up a flight of stairs, and want nothing less than the very top-of-the-range, the Hummingbird is the ride for you.