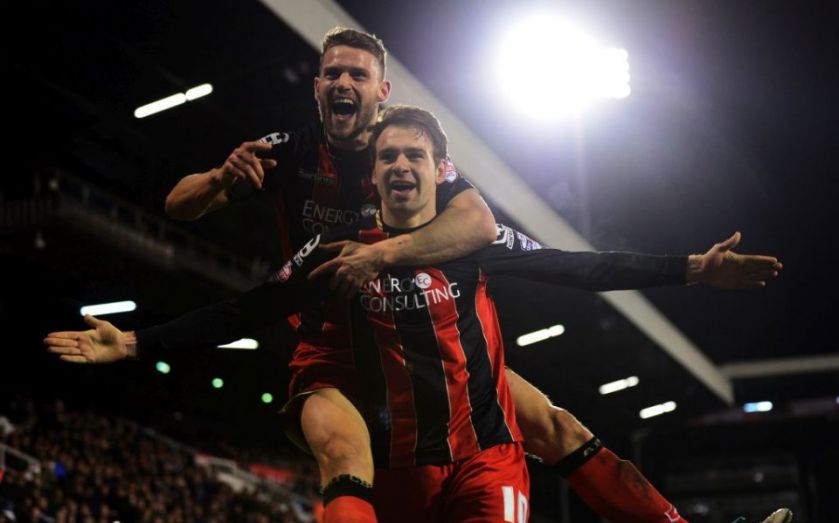 After smashing Bolton on Monday night, Bournemouth sealed (barring a miracle) their place in next season's Premier League.

On the surface, the Cherries’ ascent appears to be a timeless tale of football folklore. The narrative which followed victory over Bolton wasn’t hard to foresee: little old Bournemouth, with their 12,000 capacity ground, flirtations with financial meltdown and likeable young manager (who also happens to be a club legend) win three promotions in six seasons to earn their chance to duke it out with the big boys.

Hollywood doesn’t do football very well, but if it was looking for a story replete with the required magic, romance and sentimentality, the Bournemouth tale surely has everything it is looking for.

Yet while an attractive style of football (Bournemouth are the Championship’s top scorers), manager Eddie Howe’s expert coaching and smart recruitment have all been essential elements in the club’s rise, so too has the money pumped in by a Russian millionaire.

The mysterious Maxim Demin became Bournemouth’s full owner in 2013, after buying a 50 per cent stake two years earlier. The director of Surrey-based Wintel Petrochemicals, Demin became interested in the club after building a £5m mansion (in place of another he bought for the same price) on the luxurious Sandbanks peninsula outside Bournemouth. Yet little else is known about the man writing the cheques, other than the fact he has been generous with his wealth so far.

Until January 2012, Bournemouth’s transfer record was the £210,000 paid for Gavin Peacock in 1989. That was duly smashed in the first transfer window following Demin’s arrival – striker Matt Tubbs signing for upwards of £800,000.

The club has continued to increase expenditure on transfers ever since, yet with match-day and commercial revenues dwarfed by those of their rivals, Bournemouth have been reliant on the deep pockets of Demin to refine their squad.

When the south coast club seized promotion to the Championship two seasons ago, they did so as League One’s biggest spenders, having outlayed £1.38m – over £1m more than anyone else. Yet in the process the Cherries also racked up a hefty £15.3m loss and required an £8.7m loan from their wealthy benefactor to ease the burden.

The accounts for their first season in the Championship are yet to be released, although they have continued to spend more than they earn when it comes to transfers. In a league packed with examples of financial mismanagement, Bournemouth are far from the most lavish spenders, but neither are they minnows swimming in a sea of sharks.

In fact, of those clubs who don’t currently enjoy Premier League parachute payments just three – Nottingham Forest, Leeds United and Middlesbrough – have spent more in the last two seasons than Bournemouth. Two of those clubs (Forest and Leeds) were hit with transfer embargoes by the football league for breaching financial fair play rules.

Like so many others in modern football, the remarkable story of Bournemouth’s rise has had its script written by a millionaire.