Handshake, bow, or kiss? A global guide to business etiquette 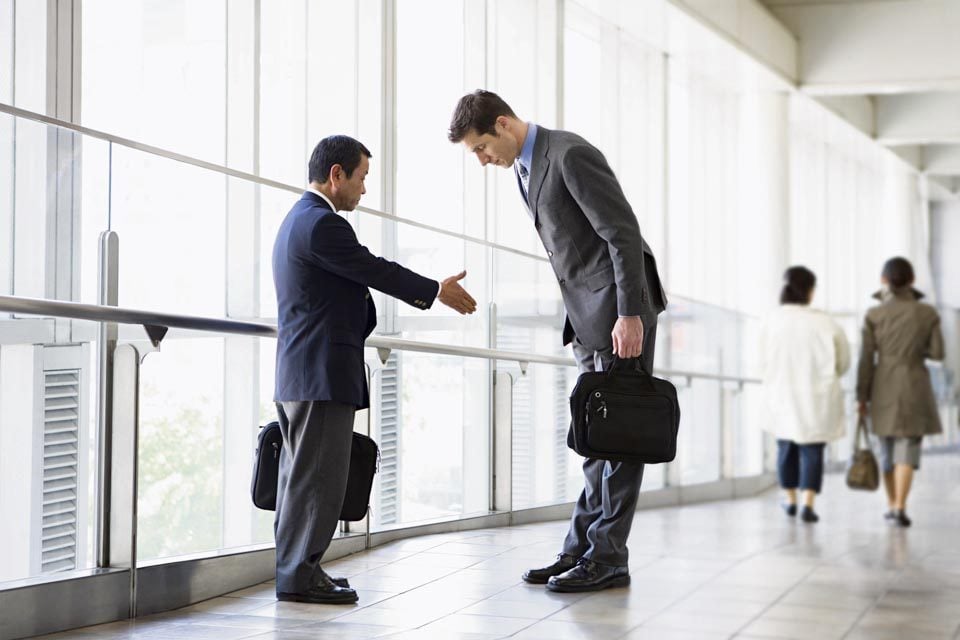 When it comes to international business etiquette, there is one overarching rule: when in a foreign country, do as they do.

Having a good working knowledge of social and regional business protocols will help avoid misunderstandings that can jeopardise business.

Here are some tips to help you out.

Use the correct titles when making official introductions. In more formal cultures like China and Japan, it’s respectful to address a person by their job title followed by their surname, such as “Professor Ng”.

Take care to check surname pronunciation and gender in advance.

In China, surnames come before first names so with the name Lee Shui Han, Lee is the surname and Shui Han the first name. The correct form of address is Ms Lee and not Ms Han. In Asia, married women usually keep their maiden names, so do not assume their title is Mrs.

When meeting new people abroad, pay careful attention to greeting language and behaviour used, as well as the physical distance between people.

The three commonly used greeting gestures worldwide are the handshake, the bow, and the kiss.

In Arab countries, kissing is common among men, and in Japan, bowing is the frequent form of greeting.

Globally, handshakes are the most common form of greeting, but the intensity of handshakes differs.

Strong handshakes are the norm in the US and Germany, but in Asia, handshakes are less firm, and are often accompanied by a slight head nod. In some countries, women don’t shake men’s hands, so British women should extend their hands first to show that it is okay to shake.

The thought that counts

In Japan, gifts (omiyage) are a precursor to business partnerships, but might be considered a bribe in other countries, so brush up on the customs.

Westerners tend to focus on useful gifts, but Easterners place stronger emphasis on symbolism, and give gifts with local cultural connection.

In China, avoid giving white flowers, clocks, or gifting in fours as these all have negative connotations. In Taiwan and South Korea, gifts are generally not opened in front of the giver, so if in doubt, don’t open the gift immediately.

Conversing in the native language will give you a competitive business advantage.

If you can’t speak the language, always learn some well-chosen native phrases, as it shows your willingness to build personal rapport. Chinese business professionals will appreciate attempts to communicate in Mandarin, so use simple phrases like xiexie (thank you) and ni hao (hello).

You will encounter differences in negotiations and conversational styles, too. In Asian countries with strong Chinese populations, business is conducted in a polite manner, so avoid direct use of the word “no”.

Be aware of self-deprecating humour too. It’s a common British trait to laugh at one’s shortcomings, but it’s often misunderstood abroad where one’s rising status in the workplace comes with an expectation of confidence.

The length of time required to conclude business deals also varies greatly. Business decisions in Japan and China are made jointly, so their decision-making process is often lengthier – it might not be until the fourth meal that a deal takes shape.

Hurrying up the decisions is usually counter-productive, so patience is key.

This is only a short guide, but should give you a jet-setting start to securing deals around the world.