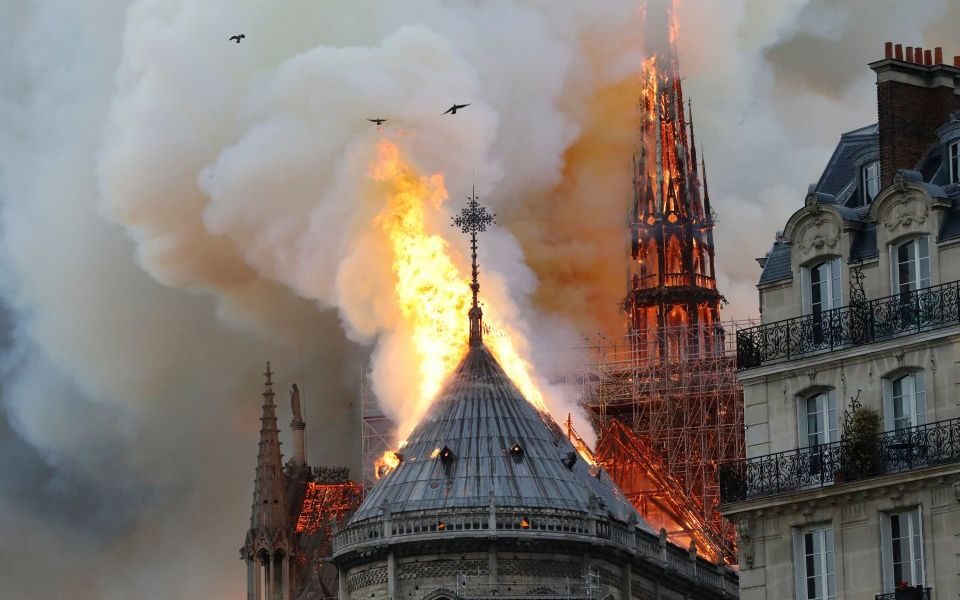 France's Notre-Dame is engulfed in flames and smoke this evening as firefighters battle to control a devastating inferno at the historic cathedral.

Parisians and tourists watched on in horror as the fire raged at the Gothic cathedral, with smoke billowing out from the top of the medieval building.

Emergency services desperately tried to salvage priceless historical artworks stored inside the Gothic building, which is over 800 years old, as police evacuated the area.

The cause remains unknown, but officials said it could be linked to renovation work.

President Macron, who rushed to the scene after cancelling a pre-recorded address to the nation over the country’s yellow vest protests, tweeted: “Our Lady of Paris in flames … Emotion of a whole nation … I'm sad tonight to see this part of us burn.”

Outspoken US President Donald Trump risked adding fuel to the fire on social media, tweeting: "Perhaps flying water tankers could be used to put it out. Must act quickly!"

The cathedral, which is famed for being the setting for Victor Hugo's historical novel on the hunchback of Notre-Dame, was largely completed by 1260 and is one of the capital's most visited landmarks, attracting some 12m people every year.

MORE: Paris police say there is a fire at the French capital's iconic Notre Dame Cathedral.

Flames and black smoke were seen shooting from the base of the medieval church's spire, which is undergoing renovation https://t.co/NC5ZmSVEa5 pic.twitter.com/5ybfPfbTpw

Notre-Dame is located in the fourth arrondissement of Paris on the Ile de la Cite.

Several hours into the blaze last night, a Notre Dame spokesperson told French media: "Everything is burning, nothing will remain from the frame."