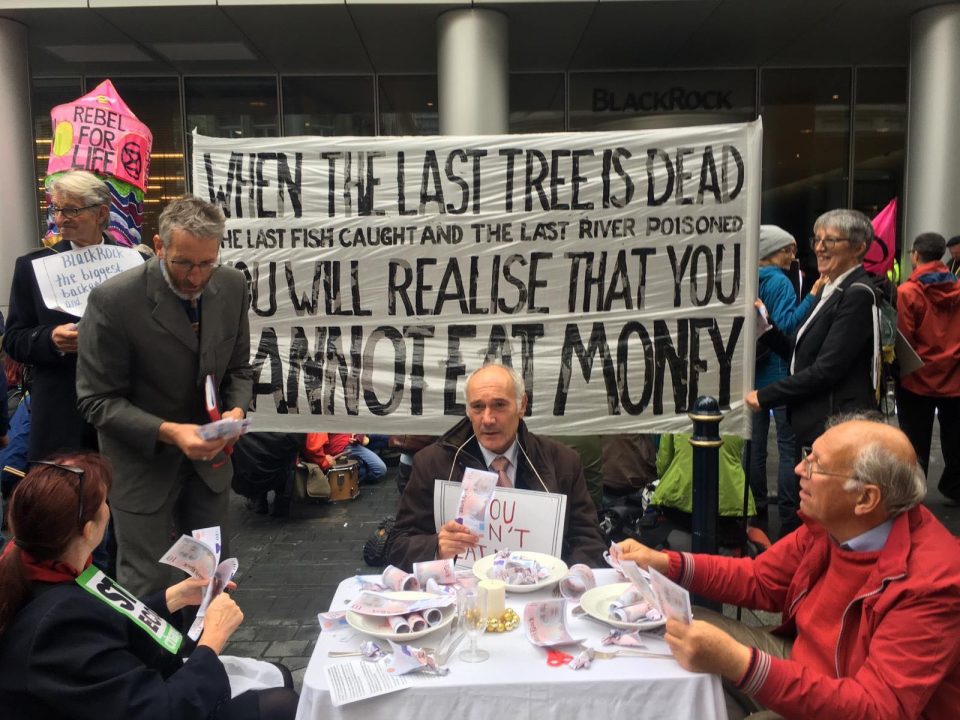 Extinction Rebellion protesters today targeted the London headquarters of Blackrock as they set their sights on the City over its role in what they describe as a looming environmental emergency.

Climate activists glued themselves to the doors of the asset management giant, while others staged a mock dinner party with rolled up banknotes on their plates.

A placard raised outside the offices read: “When the last tree is dead, the last fish caught and the last river poisoned, you will realise that you cannot eat money.”

The protesters said they were raising awareness of Blackrock’s “ecocidal investments”, stating that the firm effectively owned 2.1bn tonnes of coal reserves. Blackrock declined to comment.

The demonstration came amid wider protests across the Square Mile, with activists occupying roads outside Mansion House, the Bank of England and on Bishopsgate.

Earlier today, protesters said they had “shut down” the Walkie Talkie building that houses some of Britain’s biggest insurers, as activists target the City of London.

Activists have dressed as canaries and have glued themselves to the entrance to the 20 Fenchurch Street skyscraper.

“The Walkie Talkie building – home to many of the world’s insurance companies – has been shut down by our rebels as part of a day of action against the financial sector for its key role in financing fossil fuel expansion & the climate & ecological emergency,” Extinction Rebellion tweeted.

Insurance companies inside the building continue to put money into fossil fuel projects, according to a 2018 report from Unfriend Coal, an anti-coal campaign group.

“Our dead canaries show that the time of danger is now. Insurance and financial institutions need to divest from polluting fossil fuels immediately,” one protester, Loz Tidy, said.

“They also, shamefully and hypocritically, make premiums out of insuring communities who are facing the critical impacts of climate chaos, only to then invest that in dirty fossil fuel projects.”

Accusing City workers of “bankrolling the environmental crisis”, the radical protest group moved to blockade routes that financial workers take to their offices from Bank at 7am.

The City of London Police urged commuters to “use alternative routes if possible” to avoid the protest.

Transport for London (TfL) told commuters that “Bank junction and all approaches are closed due to a demonstration”.

Protesters blocked the junction of Gracechurch Street and Fenchurch Street before the demonstration moved to Whitechapel High Street, stopping all westbound traffic.

TfL also warned that the junction of Bank and Great William Street was affected by the protests, while protesters also gathered outside the Bank of England.

XR activists claimed London banks and funds have invested $5 trillion in fossil fuels and called on the government to make such investments illegal.

Andrew Medhurst, a former City trader-turned-activist, said: “I decided to give up a thirty year career in financial services because I could no longer ignore the climate and ecological emergency.

“I held senior positions managing risk at both HSBC and Lloyds Bank and I know that banks would never take the level of risk that the UK government appears willing to take with the safety of its citizens and the futures of our children and grandchildren.”

It is not clear how long the disruption could go on.

“We have to decarbonise our economies, so for the banks to be lending money to fossil fuel companies is just barmy,” Medhurst added outside the Bank of England.

Police have attempted to remove protesters from outside the Bank of England.

Extinction Rebellion spokesperson Rupert Reed said: “The City is financing climate breakdown. There will be no future unless this stops.”

“It’s time to think about what kind of finance system we need to support the thriving of life on Earth,” XR co-founder Gail Bradbrook added.

Extinction Rebellion tried to douse the Treasury in 1,800 litres of fake blood last month in a stunt that went wrong.

The latest action marks the second week of a fortnight of London-wide disruption that has seen 1,336 arrests since last Monday.

They protested outside the BBC and also tried – but largely failed – to stop flights leaving London City Airport.

It follows two weeks of protests last April in which activists also targeted the City of London.

Extinction Rebellion protesters glued themselves to the London Stock Exchange at the time and also targeted Goldman Sachs.

Demonstrators also attached themselves to DLR trains at Canary Wharf in a bid to make life difficult for London’s bankers.

Bradbrook has said her ambition is to upend the UK’s financial system and spark a “mass refusal” to pay off loans and mortgages.

She has called for the UK’s “debt-based” economy to change and has said economic growth relies on draining the Earth’s natural resources.

Read more: Map: Where are Extinction Rebellion protesting in London?

Protests have spread across London over the last week, with the Metropolitan Police ordering activists to confine their demonstrations to Trafalgar Square.

However, activists have targeted Westminster as well as Westminster Bridge and Lambeth Bridge and the roads around Trafalgar Square in order to bring traffic to a standstill.

In pictures: Extinction Rebellion shuts down City of London