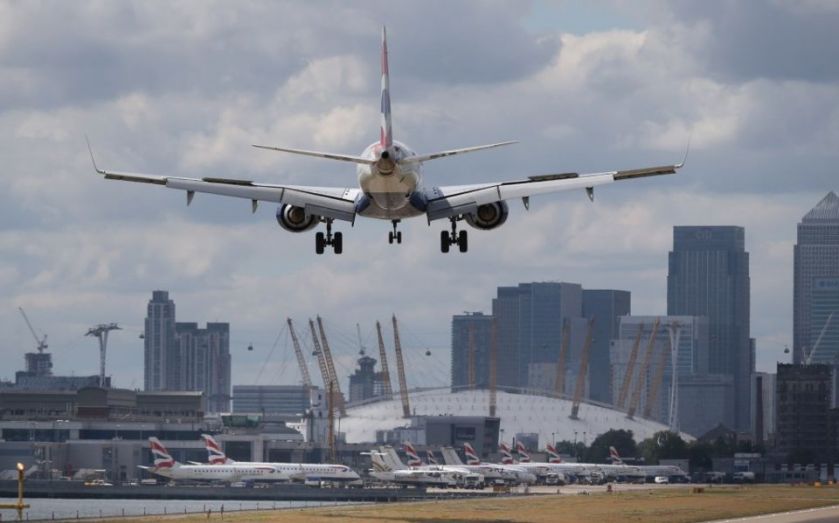 Paralympian James Brown has climbed up on top of a plane at London City Airport as a part of an Extinction Rebellion protest.

Brown, who is reportedly blind, apparently boarded the plane before backing out and climbing on to the top of the aircraft.

Brown was arrested after lying on top of the plane for about half an hour.

The person live streaming the video was arrested at the end of the clip for “aiding and abetting endangering a public aircraft and creating a nuisance”.

It came just hours after a fellow Extinction Rebellion protester disrupted a flight, forcing it to return to London City Airport.

The incident happened on an Aer Lingus flight from London to Dublin this morning as a part of a 100-person strong Extinction Rebellion protest at the airport.

Video of the incident on social media shows the man apologising for the inconvenience to passengers while he refuses to take his seat.

“We have two generations of human civilisation left if we carry on doing what we’re doing.

“I’m extremely sorry for the inconvenience.”

Other passengers are heard telling the air hostess that they should remove him from the plane.

He was arrested shortly after the plane returned to the airport.

BBC political editor Nicholas Watt was on the flight that was disrupted.

“My flight from London City airport to Dublin has just been grounded by a climate change protestor,” he said.

“On runway and about to take off when smartly dressed man in late middle age stood up with iPhone to deliver lecture on climate change up and down aisle.”

The arrest comes as a part of the group’s larger protest action in an attempt to shut down the airport.

The estimated 100 protesters are located just outside the airport, including the adjacent DLR station.

There are also a group of protesters dressed as air traffic controllers trying to create a roadblock outside the airport.

Other protesters have been arrested while cycling in to make a roadblock.

It is believed that a handful of other Extinction Rebellion members may have bought tickets to enter the terminal and disrupt further flights.

Activists have labelled the action as a “Hong Kong-style” occupation of the airport in an attempt to disrupt flights.

An Extinction Rebellion spokesman said: “Seventy per cent of climate damaging flights are taken by the wealthiest 15 per cent in society.

“That’s why rebels are at London City Airport, the airport for big business, demanding change.”

An airport spokesman said the Aer Lingus flight was the only one to have been disrupted and that it has now taken off.

He said flights are still running as normal at the airport and police are checking to make sure people entering the terminal have plane tickets.

Extinction Rebellion founder Stu Basden is believed to be among those to have been arrested at the airport.

Metropolitan Police say there has been more than 800 arrests across London over the first few days of the protest.

DAC Laurence Taylor of the Metropolitan Police, said: “Targeting an airport and inconveniencing travellers in this way is wholly unacceptable and irresponsible.

“The consequences of committing offences at airports are serious; individuals breaking the law are being, and will continue to be, arrested and prosecuted where appropriate.”

An airport spokesman said the airport was working closely with the Metropolitan Police “to ensure the safe operation of the airport, which remains fully open & operational”.