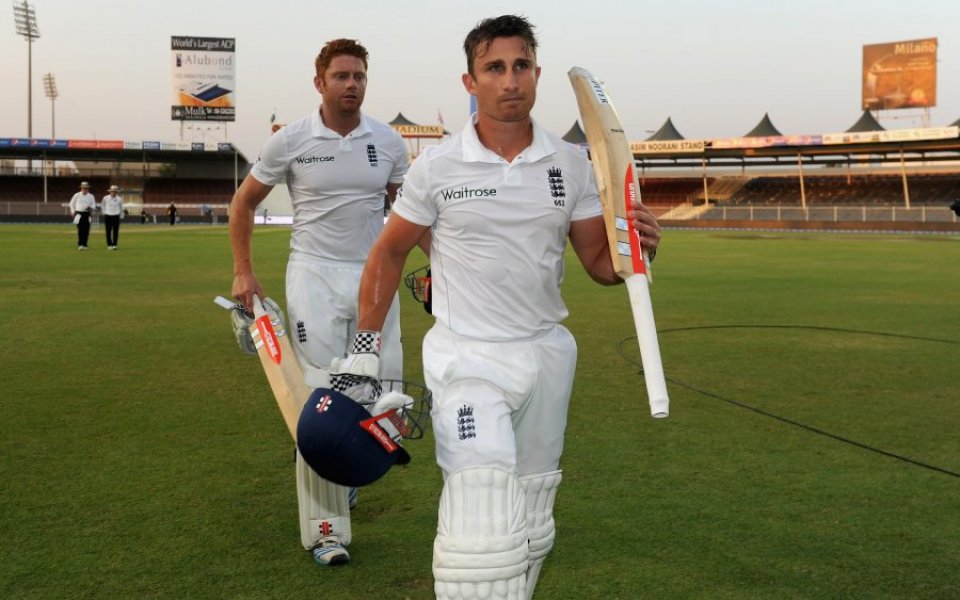 Experienced campaigner Ian Bell has targeted a 100-run lead after a patient and robust England batted themselves into a position of strength on day two of their must-win final Test against Pakistan in Sharjah on Monday.

Nottinghamshire’s James Taylor, playing his first Test since 2012, underpinned the England reply with an unbeaten 74 as the tourists closed on 222-4, 12 runs shy of Pakistan’s first-innings total.

Taylor’s maiden Test half-century was the standout contribution as skipper Alastair Cook made 49 and Bell 40, while wicketkeeper-batsman Jonny Bairstow finished the day 37 not out.

England’s run-rate was at times painstakingly slow – only 48 runs were scored in the afternoon session – although Bell insisted a gritty approach was required in order to guarantee supremacy on a difficult wicket.

“As many as possible would be great but anything up to a 100-run lead would be fantastic,” said Bell, whose side trail 1-0 in the three-Test series.

“We knew that the run rates weren’t going to be particularly high. It wasn’t about what it looked like, it was about trying to get the job done and to be four down at the end puts us in a good place and gives our bowlers a lot of rest.

“It was a tough day’s Test cricket. It was a slow pitch with a slow outfield and we had to get in and grind away. We’re really happy with how the day has gone.

“If we can edge our way up to Pakistan’s total and beyond and get whatever lead we can, that will put us in a good position.”

All-rounder Moeen Ali did little to boost his chances of opening the batting on a long-term basis as he top-edged to Younis Khan in the slips to depart for 14 after opting to slog-sweep the fourth delivery he faced from off-spinner Shoaib Malik.

Moeen is Cook’s seventh opening partner in the three years since former captain Andrew Strauss announced his retirement from the game, but he averages just 12 since being promoted to the top of the order having scored 62 runs in five innings.

Bell shared a 71-run stand with his skipper for the second wicket before Cook and then Joe Root fell for the addition of just seven runs as leg-spinner Yasir Shah and left-arm seamer Rahat Ali turned the screw, with runs becoming a premium.

The dangerous Yasir had already snaffled Cook before accounting for Bell, who was stumped for only the second time in 200 Test dismissals, which left Taylor – recalled to the side in place of the dropped Jos Buttler – to assume centre stage.

Taylor, who has previously captained England’s one-day side, showcased his ability against spin as he and Yorkshire’s Bairstow joined forces with the score at 139-4 before guiding England to the close without any further batting casualties.

“James Taylor is a wonderful player of spin, we saw that with the way he swept and with the way he used his feet. He is a busy cricketer and it was really nice to bat with him,” added Bell, who has now gone 22 innings without a Test century.

“That partnership with Jonny Bairstow was good. It was really busy and they looked for runs. Hopefully we can cash in and get as many runs as possible.”

The extent of the shoulder injury picked up by Ben Stokes on day one remains unknown. The 24-year-old, however, will not bowl for the remainder of the Test, while a decision on his ability to bat is to be assessed on an ongoing basis.

With England potentially five wickets down as opposed to the four shown nn the scorecard, there is heightened responsibility on the likes of Taylor and Bairstow to build the tourists’ first-innings lead.