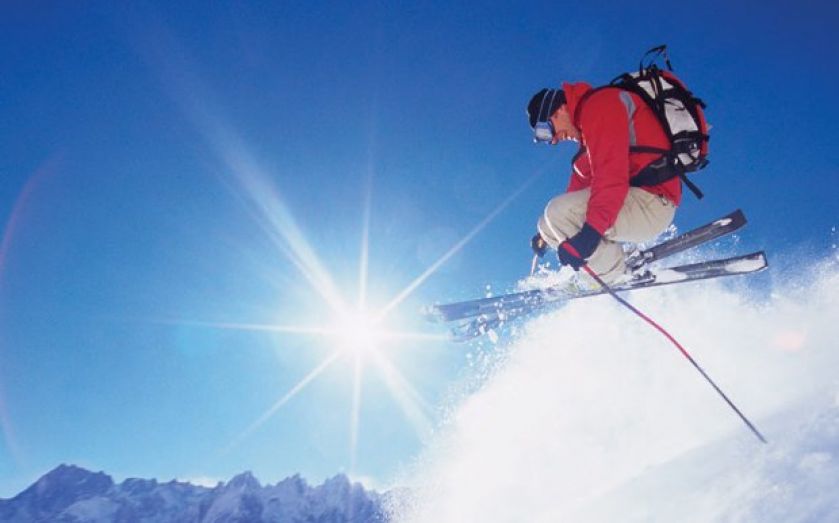 When do the best business ideas come to you? For Fraser Ewart-White, it was while swinging on a chair-lift 1500m above sea level. Ewart-White had recently left his job as head of buying at the entertainment company Blockbuster, turning his back on his career to study for an MBA and, among other great ambitions, to “learn to ski properly. I was having my pre mid-life crisis I suppose,” he says. So it was that he found himself  breezing through the fresh Alpine air, mentally writing a business plan on a ski-lift in the French resort of Serr Chevalier.
He had gone to the resort to work, and ski, for a season with his friend and now co-founder, Claire Freeland. The two were running a 22-bed chalet and quickly came to the realisation that they “could do it better than this.”
Shortly after that chair-lift conversation, Powder White was born: “we found a chalet to lease in Verbier, and the rest is history.” The business was initially funded by a “syndicate” of investors, who were predominantly friends and family of Ewart-White and Freeland. “We asked people to put in £3,500 each to pay for the first chalet in Verbier. Out of that, they got a holiday and a share in the profits.”
That was 13 years ago, and the company has grown organically without any further outside investment. Powder White now manages 55 chalets across France, Switzerland and Austria, offering “unpackaged” ski holidays in catered accommodation, which Ewart-White claims broke away from the “ghastly”, restrictive ways in which ski holidays had always been offered.
“From waking up at 3am to make the assigned 7am flight, to getting on an awful shared coach and going around all the separate resorts to find your chalet, and then there being no freedom to choose what to do when you’re on the holiday – it was awful.” Instead, Powder White allows customers to build their own holiday, choosing their own flights and transport.

After five years of steady growth, the financial crisis created what Ewart-White describes as a “turning point” for the business. “Look, if there’s a decision between going skiing and paying the mortgage – that’s not really a tough choice for most people to make. So there was panic afoot in the skiing industry.”
While most businesses offloaded properties and reduced their risk exposure, Powder White “took a do or die approach. It had always been impossible to get properties in the right resorts, in the right locations. But thanks to a massive deflation in the industry, rents were going down. So we doubled the size of our business that year. It was hero or zero basically, and much to all our surprise, it paid off.”
Ewart-White admits that this was because the impact of the crisis was not immediate. “Interest rates fell and people had more cash – there wasn’t a mass cutting of jobs and so ironically, although all hell was breaking loose, people had more money.”
However, a hit did come with the devaluation of the pound. “It suddenly became very, very expensive for British people to be abroad in Europe. That’s when the market started to suffer and we had tough times – we had to work bloody hard to sell holidays and keep the demand up.”
Powder White’s “saving grace” was a growing market of international travellers. “The Europeans especially were looking at our sterling costed holidays and thinking they were getting a bargain. So the make-up of our clients changed during that period  from being predominantly Brits, to being mostly non-Brits.
It is a trend that’s continued: 35 per cent of Powder White’s business is now from international clients. “We have bookings from Colombia, Sutton and Khazakstan all in one day. It can be hard, things are lost in translation, but mostly, it’s explaining to people this very British concept of a catered chalet holiday. No other country has this concept of a chalet person cooking and cleaning for you. But the Europeans really enjoy it. Who would have thought a British chalet girl would be cooking for the French?”

Now, Powder White offers self-catered apartments and a hotel booking service, which currently includes 350 hotels across the world. They employ 120 members of staff across the resorts, who rarely stay beyond one season – “it’s like starting from scratch every year” – and have 18 in their head office.
With the launch of the new hotel booking service, Powder White are broadening their foundation, acting as an agent with no operational responsibility and as a curator of hotels for their clients. This has seen them move out of Europe and into major resorts in North America.“Expansion has to be slow as we want to make sure all our advisers know the ski areas very well. We don’t want to expand outside of our knowledge base. That is where our credibility lies – that creates trust, confidence and, ultimately, bookings.”
With this expansion, Ewart-White shows no signs of stopping – and he says that exit isn’t on his mind just yet. “There’s a lot more to do, a lot more growth in the business. Plus, I don’t know what I’d do if I sold up. I’d get bored.”