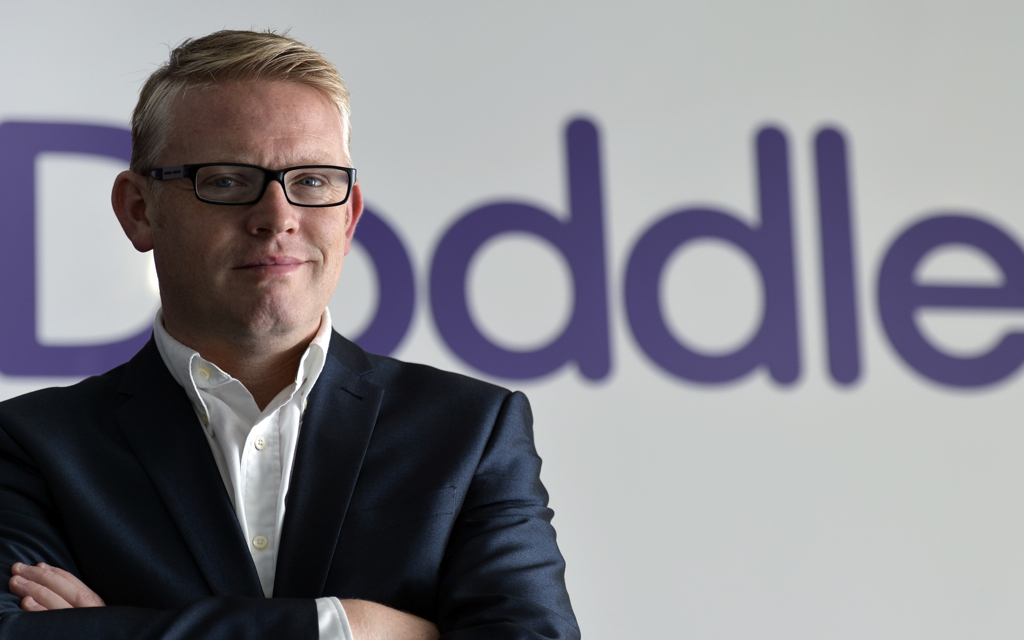 Have you used Doddle? If you have, then you’ll either have done so once or 13 times, Tim Robinson, chief executive of the parcel collect and send service tells me. Founded in the autumn of 2014, Doddle has done rather well so far. Over its 2015 peak trading period (the run-up to Christmas), it saw 1,217 per cent growth from a year earlier. Across its 45 stores, a parcel was picked up every four seconds during its busiest trading hours. Between October and January, the number of MyDoddle members grew from 85,000 to 130,000.

But this was never meant to be the story of a high-growth startup. Robinson came up with the idea while working as a managing director at Network Rail. “I’d been in logistics for 20 years, and one way or another had ended up dealing with human freight. One question we were asking was how the railways could play a part in e-commerce. They’re losing out because of clean energy policy, and the shift in recent years towards on-site logistics at ports. At the same time, it was obvious that commuters are time-starved but cash-rich – they’re prolific online shoppers, but picking orders up can be difficult. And one of the biggest frustrations for carriers is failed first-time deliveries.”

So Doddle was born – the firm that lets you pick up click and collect deliveries and send parcels from its conveniently-placed stores. “Lots of members see us as the new Post Office – although I’m not allowed to say that.” Half funded by Network Rail, Robinson went on a hunt for the “ideal partner”, which turned out to be Travelex founder Lloyd Dorfman. With Robinson and some colleagues chipping in, Doddle had a funding plan for the forseeable future.

Initially, the business plan was to open 300 in-station stores by 2017. But “we learnt that it wasn’t just railway stations that our services really worked in. We’ve got six stores in universities now. Shopping centres work well – for staff, that is. Westfield Stratford has 11,000 workers at any given time. We’ll have well over 300 stores by 2017, but not all in railway stations.”

And no-one in the team had bargained for the “enormous differences” between cities – even boroughs. “In Kingston, for example, you’ve got relatively high earners who are out during the day. They use our service in the core way. But you’ve also got a very multicultural demographic – people want to send things to family members overseas, for example. A couple of miles over and you’re in Richmond – that’s very different again. In the City and Canary Wharf, we’re attractive to big employers because we basically provide an outsourced mail room. Often, they’ve had to cap the number of deliveries employees can get.” This hyper-localism also relates to where Doddle puts its stores. “If it’s 50 or 60 yards away, that’s too far. Open a store round the back of a station, and people won’t go. We’ve had to become choosier with where we open sites.”

Now, Doddle has created two new flagship services: Doddle Runner and Doddle Neighbour. The first sees runners (“specially trained” in the art of getting bulky parcels from A to B) picking up your delivery and dropping it off at a store, or vice versa. And you can organise the whole thing from your phone.

The second is what Robinson describes as the “shrink wrapping of all the tech we have in the shop given to someone digitally savvy”. It enables a person in a given neighbourhood to take parcels in for local residents. They’ll pick them up from the nearest Doddle store for you – and you can send parcels via them too. “It’s our most important development yet, but Doddle Neighbour is only possible because of our existing store network. It’s very difficult to build from the bottom up in a shared economy model.”

Doddle’s store network is also key in enabling it to offer same day delivery. “It’s an interesting one. Two years ago, I wouldn’t have believed it – that people would need or want same day delivery. But new demand has been created. The only way you can do it is by having little hubs.”

An overhaul of expectations is something Robinson has to factor into his business more widely. “Historically, people would say, ‘so what’s the plan?’. Now, who knows? There’s no point putting your efforts into the endgame – you have to spend your time working out what’s going well and making sure you’re ready to pivot if needs be. The retailers we work with need us to be as flexible as possible, so we make sure we are.”

I ask Robinson what he envisages for the future when it comes to online shopping and delivery. “There is a limit to the number of choices you can realistically serve up to customers. They’ve got hundreds of options when it comes to product. By the time the retailer gets them to the checkout, it’s worried about giving them too many choices and putting them off. That’ll change. We won’t have bulk delivery of items ordered – people will want more control. You’ll be given the best delivery options for each product, which will likely coincide with a smoother digital payments systems.”

Away from the future, Robinson has a present focus: he’s looking for a new partner. Last September, Doddle’s relationship with Network Rail was disrupted. “Network Rail’s world changed drastically – it was effectively renationalised, and it became clear pretty quickly that it’d be unlikely to be able to continue funding Doddle.” That resulted in Dorfman buying the infrastructure firm out to help for the time being. “We’re still drawing down on the original funding, but we are now looking for a new partner.” It would be great to find one who could “give us volume, new infrastructure, or help us scale overseas,” Robinson says. “We’d happily dilute equity again for that traditional partnership approach. That’s the plan for 2016.”