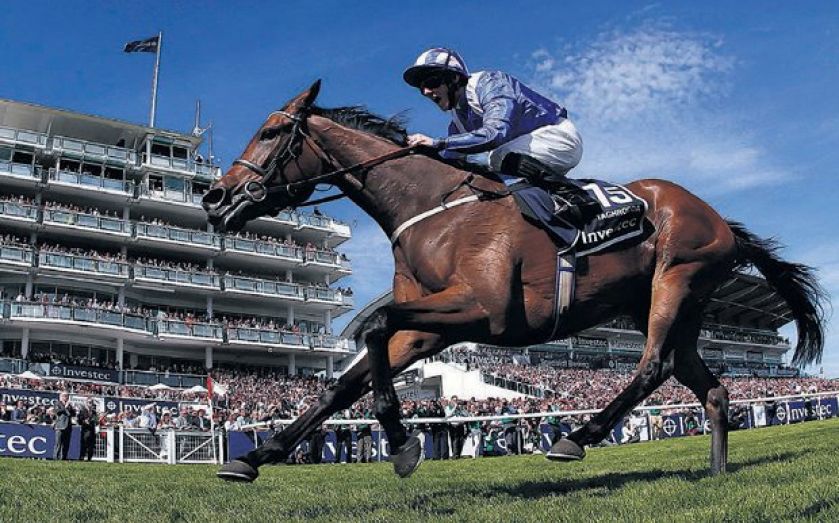 TRAINER John Gosden believes Taghrooda “can handle anything” after the filly earned him a first victory in the Oaks and a maiden Classic triumph for former champion jockey Paul Hanagan at Epsom yesterday.

The daughter of former Derby winner Sea The Stars went off priced at 5-1 but romped to a convincing threelength victory ahead of Tarfasha and Volume to give owner Sheikh Hamdan Al Maktoum a one-two. Favourite Marvellous failed to muster a challenge.

Taghrooda’s win proved a fitting spectacle for the feature race on the first day of the Investec Derby meeting, which culminates today, and represented the fruit of months of work for Gosden.

“We’d been planning this all winter and when she went third favourite I thought ‘great, the pressure is off’,” he said. “She’ll handle anything. It’s almost good to firm out there now. The Irish Oaks is the logical next step.

“Paul rode her brilliantly. Coming down Tattenham Corner at the most critical point, Paul was very quick to get her back on her near foot and balanced into the straight. Full marks to Paul.”

Hanagan said he had always had confidence in Taghrooda, who dazzled when winning the Pretty Polly Stakes by six lengths at Newmarket last month.

He added: “It went like clockwork. You plan for the race to go like that in your head and it really did go well. The only time I got a scare was five furlongs out when she got a bit of a bump and just changed legs.”

The result was also a win for City A.M. racing specialist Bill Esdaile, who tipped Taghrooda and Tarfasha among his Oaks top three, as well as a Sheikh Hamdan one-two.

The race was run in memory of Sir Henry Cecil, who trained eight Oaks winners and passed away last year. The failure of Marvellous dashed trainer Aidan O’Brien’s hopes of completing a fillies’ Classic double.

Earlier in the day Adam Kirby maintained his unbeaten record aboard French Navy to claim the Investec Diomed Stakes. Kirby, who also piloted the Godolphin six-year-old to wins at Windsor and Goodwood, beat Graphic by two lengths, with Windhoek third.

Thistle Bird won the Investec Princess Elizabeth Stakes for a second year running, beating Odeliz by a length with Just The Judge third. Faraajj out-sprinted Air Pilot in the Investec Wealth and Investment Handicap, Abseil narrowly justified his favouritism in the Investec Mile, while That Is The Spirit kept his unbeaten record in the Investec Surrey Stakes, but only after a photofinish with Parbold.