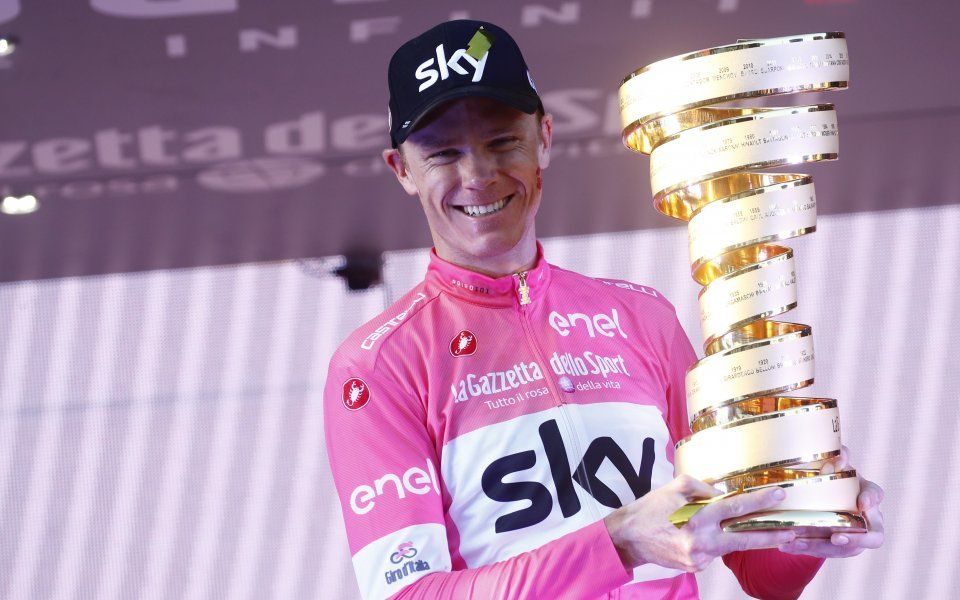 Chris Froome’s victory in the Giro d’Italia has propelled him alongside the greatest cyclists of all time – for now, at least.

Rolling over the victory line in Rome on Sunday, the Briton became only the third rider to hold all three of cycling’s Grand Tours at once. And the Team Sky rider’s victory puts him among only seven people to have completed the hat-trick of Giro d’Italia, Tour de France and Spain’s Vuelta a Espana over their whole careers.

Every one of these riders has seen their reputation tainted by allegations of doping, whether proven or not. Froome is no different. An adverse analytical finding for excessive levels of the asthma drug salbutamol at last September’s Vuelta has hung over the 33-year-old since it was leaked in December.

With a final adjudication outstanding, Froome could yet be stripped of his Vuelta title – and with it his place alongside Eddy Merckx and Bernard Hinault. But it was the manner of his Italian victory which has provided further fuel for those who believe Froome is a cheat.

Froome said after the stage:

I don’t think I’ve ever attacked like that before on my own.

With his rivals shocked, he held onto the leader’s pink jersey through a second mountain stage on Saturday and during a processional run into Rome on Sunday.

While warming down minutes after Friday’s stage New Zealander George Bennett, who finished eighth overall, was gobsmacked when told of Froome’s exploits.

“Did Froome stay away? No way!” Bennett said, in a widely circulated video clip. “He did a Landis. Jesus!”

Bennett was referencing an audacious victory by American rider Floyd Landis in 2006, who – similarly minutes down on general classification – soloed to victory on a stage of the Tour de France to the Alpine town of Morzine. He went on to take the overall title before a failed drugs test saw him stripped of the victory.

Bennett has subsequently rowed back on his comments, saying they were taken out of context. Context or not, he was just saying what many were already thinking – not least one spectator who harangued Froome from the side of the road on Friday dressed as a huge asthma inhaler.

But unlike Landis’s effort, Froome didn’t make up most of his time on the way up the mountains. Most of the three minutes and 23 seconds gained on Dumoulin was taken on the downhill. Risking life and limb, he plummeted at break-neck speeds. While doping might help a rider go faster uphill, there aren’t many drugs which assist you going down the other side.

Dumoulin’s decision to follow the wheel of Swiss rider Sebastian Reichenbach cost him dear. “On my own, I can descend just as fast as Froome,” the Dutchman said. “But Reichenbach descends kind of like an old lady. With hindsight that wasn’t the best idea.”

Froome’s ability to hold off a select group containing Dumoulin through the valley roads can also be traced back to published analysis of his punishing training regimes earlier this year. One ride in January saw him pedal 272km in one sitting, averaging 45km/h over mountainous terrain – an incredible effort for the hardest of professionals.

In addition, Team Sky, as is their way, meticulously planned for Froome’s attack, reportedly having their entire staff spread along the route ready to hand out water bottles and energy gels. Dave Brailsford himself found himself stuck at the bottom of the last climb after borrowing one of their bikes to venture out onto the course. Instead of watching the race on Thursday, the Team Sky boss had spent most of the day chatting with nutritionists and plotting how best to fuel Froome.

Chris Froome went on the attack with 80km to go on Friday's stage 19 of the Giro d'Italia (Source: Getty)

“This was the hardest victory for me,” Froome said yesterday, reflecting on his Giro title. Six weeks away, the Tour de France is his “big goal now”.

I know from my side, I’ve done absolutely nothing wrong and it’s only a matter of time until that is clear to everybody.

“There should be no question at all about the validity of the results here [at the Giro],” he said, adding that he had been drug-tested before and after every stage.

Whatever conclusion authorities come to on his adverse analytical finding from the Vuelta – and in the absence of further test results to the contrary – Froome’s conclusion on his Giro exploits seems fair.

It is right, therefore, to celebrate Froome’s victory in Italy as an achievement in itself. Obviously, such fanfare should come with caution, but it should not move the needle of opinion one way or other on the Vuelta allegations.