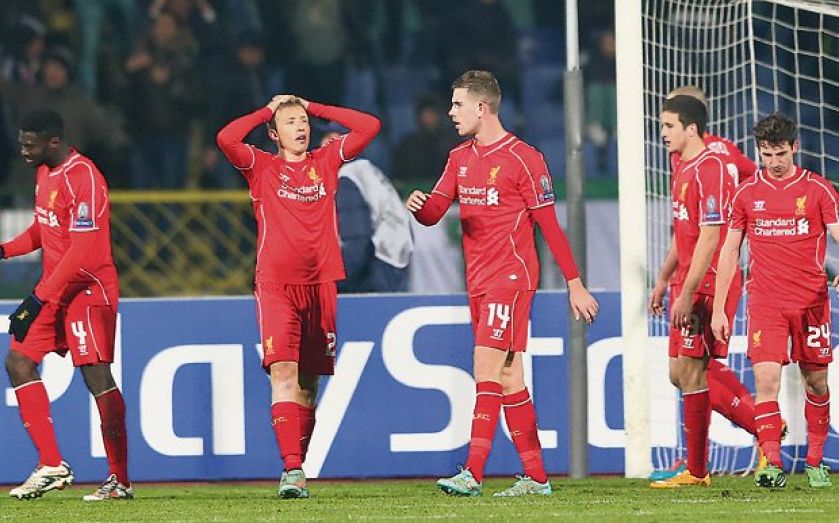 LIVERPOOL boss Brendan Rodgers insists his side’s Champions League draw with Ludogorets Razgrad last night can act as a season-defining moment despite the Reds conceding a late leveller against the Bulgarian champions in Sofia.

But Terziev’s heroics for the hosts changed little in terms of Liverpool’s quest to reach the knockout phase, with Real Madrid’s victory in Basel meaning Liverpool will qualify should they beat Basel at Anfield next month. A draw will not suffice.

In selecting the likes of Kolo Toure, Joe Allen and Lucas Leiva, Rodgers reverted to players who were not part of the close-season Anfield intake, a decision which paid dividends according to the former Swansea supremo.

“We spoke before the game that this needed to be the night that changed our season and for that we needed to show the character I knew was in the team,” said Rodgers. “We showed wonderful resilience and kept our focus.

“To go behind in this competition so early you need a team that is really together and has a spirit and I think the character really came out. We’re disappointed with the goal at the end but it’s irrelevant, we need to win the last game against Basel.

“There were obviously more players [selected] that I know what they’re capable of. In time the new players will adapt to the way we work but we’ve set a standard here in the last two and a half years and we haven’t lived up to that this season.”

Liverpool’s woes appeared to be deepening in the third minute when Simon Mignolet fumbled Marcelinho’s dipping shot from the edge of the area straight to the onrushing Abalo who stabbed home to punish the under-fire Belgian keeper.

The Reds equalised five minutes later when Lambert took full advantage of hesitancy within the home side’s defence to charge onto his initial flick and head past stranded Lodogorets stopper Vladislav Stoyanov.

The visitors completed their turnaround with half time approaching as Raheem Sterling’s low, whipped ball into the box was hooked home at the far post by the returning Henderson.

But the Anfield side’s fallibility at set pieces was exposed once again as Terziev converted Svetoslav Dyakov’s near post flick from a corner in the 88th minute.