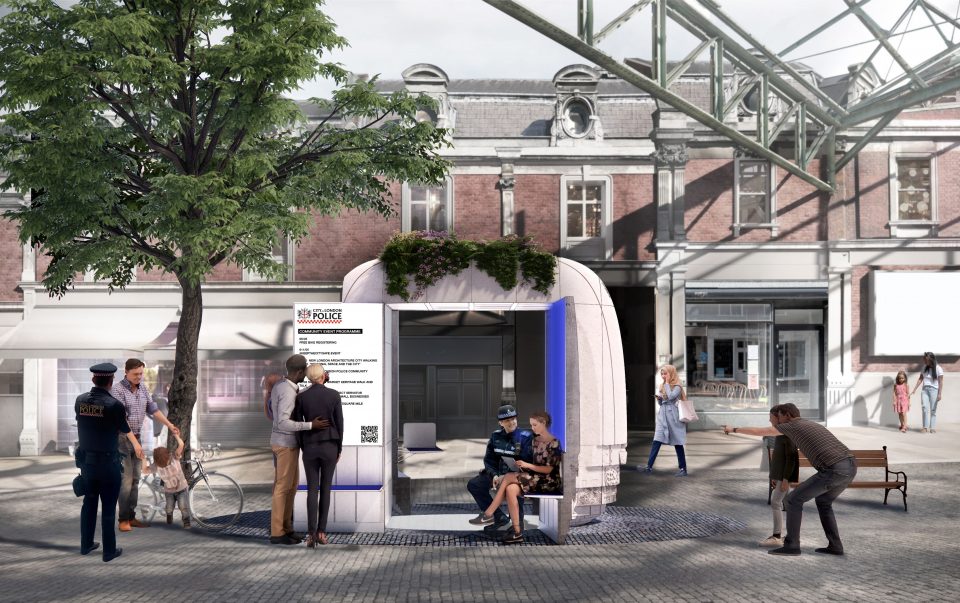 Traditional police boxes in the Square Mile are set to be reimagined as new ‘Digital Service Points’ after the City of London Corporation announced the winning design today (29 June).

They can also serve as a dedicated hubs for on-beat City of London Police officers and as a space for community engagement and events.

Details from buildings, stories and images of the past, present and future of the Square Mile will be collected to be digitally carved into the stone exterior of the Digital Service Points – providing an active and engaging addition to the public realm.

The winning design is in line with the City Corporation’s ambitious Climate Action Strategy, including the use of sustainable construction material (predominantly stone and recycled steel), natural lighting and passive ventilation, solar panels and power generation, and a unique approach to ecology.

The London Stones will also become a base for real scientific research, including pollution monitoring and planting projects to encourage biodiversity and invite forgotten species back into the City once again.

The stone exterior will play host to a vast array of lichen colonies and species which, over the course of their slow growth, will evolve in their colour and appearance.

The Digital Service Point competition, run by the City of London Corporation, City of London Police, New London Architecture (NLA) and Bloomberg Associates, was born out of a public and stakeholder engagement exercise looking at security in the Square Mile, including police visibility and contact, as part of the Secure City Programme.

The design proposals of the six shortlisted teams were judged by an international jury composed of leading designers, urban strategists and the City of London Police:

The designs were judged on their innovation and originality, functional and technological qualities, accessibility and inclusivity, approach to sustainability, and response to the City’s history and identity.

“This project sets out a real ambition for changing the way that people engage with the City, it’s story and the police – and we’re delighted to have been chosen along with our project team to take this work further.

“Our starting point was the London Stone, a humble fragment of the City’s past that’s been watching the City grow for thousands of years. It’s mottled skin hums with myth and wonder – something we hope to echo in The London Stones.”

Chairman of the Streets and Walkways Sub Committee at the City of London Corporation, Graham Packham, said:

“This thrilling design by Unknown Works has transformed the humble police box into an innovative and creative ‘Digital Service Point’ which is entirely suitable for the 21st Century and will serve the Square Mile’s residents, workers and visitors long into the future.

“This winning concept design provides the blueprint for a key piece of infrastructure for the Square Mile, whilst also being sustainable and entirely complimentary to the unique City environment.”

“Congratulations to winners Unknown Works on the innovative and impactful design. The London Stones will not only provide an essential technological update to the way members of the public report crime, but will also embrace the rich history of policing in the City and our long standing relationship with our communities.

“We want everyone who comes to the City, whether it be to work, live or visit, to trust that their safety is our priority. The introduction of these new ‘Digital Service Points’ is one of the many ways we are providing safeguarding to those within the Square Mile.”

“The unanimous decision by the jury was as much for the thoughtful, elegant and innovative design as for the dynamic, inventive team at Unknown Works.

“Their knowledge of the history, businesses and needs of the residents makes them a perfect partner for this project.”

“The London Stones is a fantastic winner. We loved the concept of using stone and harnessing an ancient material to create 21st century public services.

“Unknown Works’ proposal is not only practical but also capable of bringing a tactile, reassuring and intriguing presence onto the streets of the City of London, and their idea to use The London Stones to also tell stories of the City, its biodiversity and our impact upon the planet was inspired.”

The City of London Police will now be seeking to develop the winning concept, create a working prototype and to install the first new Police Box in the Square Mile.