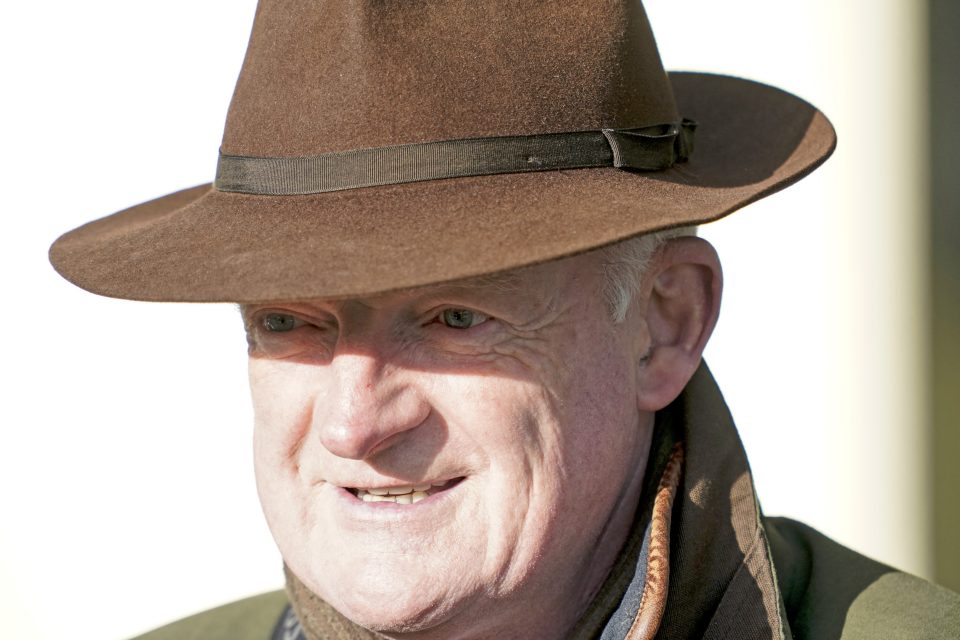 IF YOU were to ask any trainer the races they’d most like to win, the Queen Mother Champion Chase would be very high up on the list.

Though Willie Mullins is the winning-most Cheltenham Festival trainer of all time, Wednesday’s feature race has eluded the Irish supremo thus far.

Speaking at his Closutton stables in County Carlow, Mullins acknowledged he has a big chance of adding the race to his remarkable CV this year with Chacun Pour Soi.

“It’s probably the most watchable race at Cheltenham and Chacun Pour Soi has a very good chance this year. It would be a fantastic achievement to win it.”

Another huge achievement would be if Faugheen could win at the Festival for a third time.

He’s perhaps the most popular of all the horses in the Mullins yard and his trainer was blown over by the reception his 12-year-old received after winning at Leopardstown last time.

“I couldn’t get over the reaction in the stand at Leopardstown, I think it was probably the best reaction I’ve ever seen at a racecourse.

“There’s a lot of pressure bringing a horse of his age back, but he’s captured the racing public and continues to perform.”

Once again, Mullins has an extremely strong team heading to Cheltenham:

We think the horse should go for the Supreme and that’s where we are heading at the moment. I’d been aiming him at the Albert Bartlett all season, but he’s bolted up over two miles twice now, so this looks the best race for him.

After his win the other day, I think he’ll be supplemented for the Champion Hurdle. I loved how he put the race to bed in a few strides at Gowran and I think he’s good enough. The decision to run has been made solely because of how open a year it is.

She’s a hell of a mare and I couldn’t believe what she did in France last year. You’re almost guaranteed to get soft in the going on the first day and that’s a big plus for her. She was very unlucky last year and I’d like to get some unfinished business done.

He’ll go for the National Hunt Chase and it’s a race he looks born and bred for. He’s looked beaten in his last two starts, but has battled back. He gallops, jumps and Patrick [Mullins] is really looking forward to riding him.

The RSA is the probable race for him. He’s light on experience, but stays, gallops and his jumping is a huge asset. My only worry is he was a bit keen the last day and if he’s like that in his next bits of work, we’d have to consider going back in trip for the Marsh.

Chacun Pour Soi was much better the other day at Leopardstown and I think he’s improving all the time. We’ve always thought the world of him but he’ll need to improve again as it’s such a strong race.

He’s done everything right in his two runs and looks to be going there with a big chance. He has a huge cruising speed, which you need in the bumper at Cheltenham. I think he’d have to be one of our main hopes this year.

I was delighted he was able to come back and win two Grade One races and he’s been in great shape since. I was disappointed I didn’t go chasing with him last year as I’ve always wanted to, but I’m very happy he’s come back and proven a point. We have to discuss where we go now.

All roads lead to the Gold Cup. The prep worked so well last year and I’m a bit of a creature of habit, so we’ve decided to follow the same path this season. He comes into the race fresh and with normal improvement he should have a fantastic chance.

Kemboy’s two runs this year have been very good and he was probably a bit unlucky last year when he unseated David [Mullins]. I think he has it all to do around there and I’d be delighted if he finished amongst the places.

Cheltenham Festival goers are in for an alternative experience this year with the introduction of The Park. Love Island’s Amy Hart and Frankie Foster, as well as ITV Racing’s Chris Hughes, will be part of the social enclosure, where spectators can enjoy top entertainment. Entry is free for 18-25 members. Prices start at £15 for others.